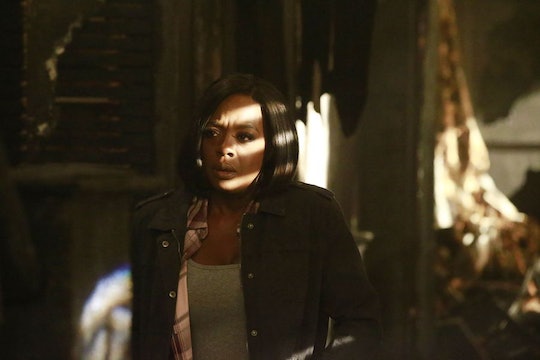 Since the beginning of the series, fans have had wild theories about Wes being Annalise's son because of the interest she took in him right away and how, after being waitlisted for such a prestigious school, he was also chosen as one of the Keating 5. And now, despite Annalise saying Wes was like a son to her, you can't help wondering if there are any clues that Wes is really Annalise's son on How to Get Away With Murder after all.

In the Season 3 finale, Annalise gave a big speech to her AA group about how Wes "Felt like my son… He was my son, and he’s gone." In a way, she could have just been talking about both her stillborn son and Wes, finally owning up to the surrogate mother-son relationship they kind of sort of had. But in another way, what if Annalise was being more literal than we thought and perhaps admitting to something much bigger?

Let's look at the facts as they were given to us: Rose was, presumably, Wes' biological mother. Annalise met her when she was working on the Mahoney case 10 or so years ago. It was later revealed that Charles Mahoney, who would have been a teenager but looked the same age as present-day, sexually assaulted Rose, causing her to get pregnant with Wes. But, as usual, things may not be as they appear.

It might be a bit of a reach here, but Wes being Annalise's son on HTGAWM could be possible if you look at the details close enough. What if Annalise gave birth to Wes years before, when her career wasn't so established? The farthest back we've seen of her life in detail is this time on the Mahoney case. So she could have given Wes up for adoption, he ended up with Rose, and Annalise took the Mahoney case years later for purely that reason.

In one of Wallace Mahoney's first scenes on HTGAWM he told Annalise, "My corporate attorneys told me not to hire you, but every judge and lawyer friend I know told me that we would need a woman if we had any chance at winning. And with a jury made up of mostly minorities, a woman of color would be best. So I found you." He went on to say a bunch of racist and sexist stuff because he was an awful man, but what if Annalise was the one who made it possible for him to find her?

When she first set eyes on Wes at the park and struck up a conversation with Rose, she seemed super interested in him. And maybe not just because she was pregnant, but also because she knew that was the son she gave up years before.

The biggest clue that Wes is Annalise's son, of course, was the big speech she gave on the Season 3 finale of HTGAWM and although some might say it was just her way of owning up to the close connection she had with Wes, you might also say that it was also her finally admitting what fans had theorized all along.

Now, there's still the matter of how and why Rose would and could adopt Wes from Annalise. And if Annalise was pregnant years before the Mahoney case, who would have been Wes' father? This was, presumably, her first case with the family, so it definitely couldn't have been anyone else in the family. And if that's true, then why would Wallace Mahoney's wife be so sure that Charles had gotten Rose pregnant?

There are certainly some holes that need to be closed up and facts that need to be ironed out, but you just can't ignore the way Annalise talked about Wes at the end of the season. As much as the logical side of me is sure she was speaking on a figurative level only, there's that other small part of me that knows how much this show loves to shock its fans. The theory doesn't seem probable, but that doesn't mean it isn't possible.