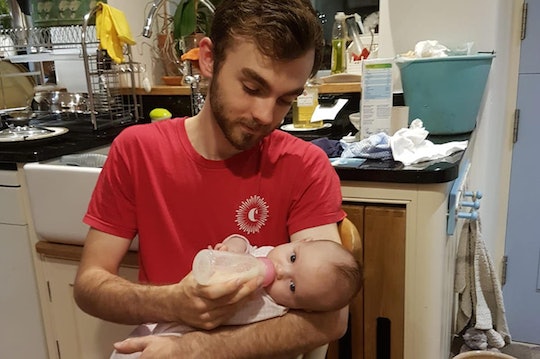 Combination Feeding Was Not The End Of Me Or My Baby

If someone had told a pre-motherhood me that I'd try combination feeding my baby in a distant future, I probably would've laughed in disbelief — certain that there were no baby bottles or sterilizing equipment in my family's eventual plan. I was 14 when I experienced my first kiss, but I was probably 4 when I decided I would become a mom someday. I still remember cradling my baby dolls fiercely by day and rocking them to "sleep" by night. I can recall my obsession with newborn cousins. I so desperately wanted to mother them that I once shoved a slightly older relative out of my way and onto the ground when he tried to hug an infant before I'd had the chance. By the time I was old enough to consider having actual babies rather than inanimate plastic ones, I also knew I wanted to breastfeed.

It wasn't necessarily the clinical benefits of breastmilk that drew me to the act, which are said to include protection against infections and diseases for baby as well as a reduced chance of Sudden Infant Death Syndrome (SIDS). It wasn't really about the clinical benefits for me, either. As The New York Times reported in 2018, breastfeeding can reduce a mother's relative risk of breast cancer, ovarian cancer, Type 2 diabetes, and rheumatoid arthritis, while potentially improving cardiovascular health.

I wanted to breastfeed because I was determined to do everything I could to establish a profound bond with my children. Although I didn't doubt that formula-feeding parents felt wholly in love with their own babies, I couldn't help but feel that nursing — this utterly physical exchange between a baby and a mama — must help on the road to creating a long-lasting connection.

One of the first lessons I learned after having a baby, however — and one that has only been solidified after having two — is that parenthood doesn't actually care about your plans. Although I almost exclusively breastfed my eldest daughter for 15 months (using formula only once or twice when I needed to go out but hadn't managed to pump enough breastmilk), I started combination feeding my second daughter at the four-week point. As it turns out, this wasn't the end of me, my baby, or our bond.

"Combination feeding" most often refers to feeding a child from the breast for some sessions and from a bottle for others. Although the bottle feeds can be of breastmilk or formula milk, I have often chosen to supplement my youngest daughter's feeds with formula.

Almost instantly after that first bottle, Elia was happier than my husband and I had ever seen her.

I suppose it all started out of fear of under-production. Elia seemed terribly unsettled throughout her first month of life, even after nursing for an hour or two at a time. My midwives eventually reassured me that my production was just fine, but that Elia might be a hungrier baby than my first. I was making enough milk to keep her healthy and strong, but possibly not enough to keep her totally happy.

When the time to decide whether or not to supplement came, I actually never hesitated. For all my previous desires to breastfeed exclusively, making sure I was keeping my kid as satisfied as possible took priority. I turned to Aptamil Hungry Milk to supplement in and around the day, hoping that the extra milk would help sooth her — and it did. Almost instantly after that first bottle, Elia was happier than my husband and I had ever seen her. She napped for longer than she ever had before, too.

After a couple of weeks of doing this, I began to realize that there were other benefits to combination feeding as well. My husband had been able to help feed our eldest, Luna, if I managed to pump — but I almost never did. There simply weren't enough hours in the day. By incorporating formula into the picture with Elia, we could more evenly distribute the responsibilities. I could actually have a break once in a while.

I don't regret exclusively nursing Luna, of course, but there were definitely times when doing so was limiting. I never felt I could leave her side for long. I never felt I could take a trip to visit friends, or have a date night with my partner, or even go the grocery store without her, in case she got hungry. In some moments, breastfeeding was the most beautiful, precious of experiences I shared with her. In others, it was among the most trapping.

The wonderful thing about combination feeding Elia is that I am getting the positives of the nursing experience without the negatives. I feel indescribably close to her when I am breastfeeding. There are few things that can warm my heart as rapidly as seeing and feeling her tiny hand pressed against my chest while she drinks her milk. This time around, though, I have more freedom. My husband and I can leave her with a babysitter when we're in need of some couple time. I can leave her with my husband when I'm in need of some me-time. I can actually work for four or five uninterrupted hours, knowing that whoever is watching her will be able to give her a bottle. I can dedicate some one-on-one time to my toddler, without worrying that it'll be cut short.

Not only has combination feeding not been the end of me, but it's actually been a complete help. My mental health throughout this postpartum period has been miles better than it was the first time around — and although there are many reasons for this, I do not doubt that being able to make a little more time for myself is among them.

When it comes to little Elia, she is thriving as well. At every checkup, I am told how brilliant her smile is; how undeniably content she seems. Her weight remains on the same percentile it has been since birth, and my midwives always comment on her "glowing" complexion. She is a very happy baby, and in turn, we are very happy parents.

Even though I am not exclusively formula-feeding, doing so for even a small percentage of the time has also made me reevaluate any lingering thoughts I may have had about its impact on a parent-child bond. Seeing others bottle feed my baby, and having that physical distance from her while it's happening, has never once made me feel less connected to Elia. I have never doubted the strength of our relationship. I have never felt our love waver.

All parents, and especially moms, know that there is a tremendous amount of pressure put onto us when it comes to the decisions we make for our kids. It's almost impossible to escape guilt or paranoia or fear of the future, when it's so clear that any choice we make is up for scrutiny.

My decision to combination feed was rooted in keeping my baby as happy as she could be. What I found afterwards was that this decision had a cyclical, positive effect. Not only was Elia happier, which in turn made me happier, but she was also feeding in a way that gave me just a little bit more downtime. This downtime, even if it's only limited, has undoubtedly made me more present and content when I'm with her, which has only seemed to make her more settled when she's with me. As it turns out, combination feeding has served as a simple reminder that keeping your baby's happiness a priority is crucial to parenting — so long as yours doesn't get lost in the process.