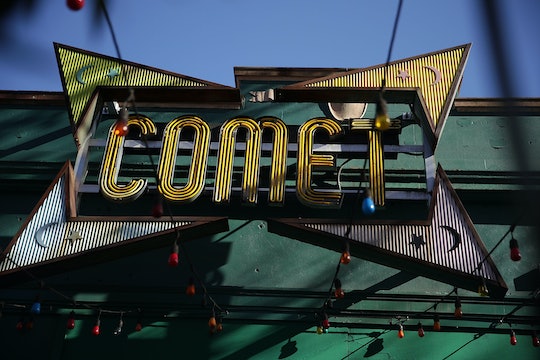 For those that assume conspiracy theories and social media hashtag campaigns don't have a tangible affect on the real world, the Comet Ping Pong shooting incident in Washington, D.C. on Sunday is a rude awakening. Luckily no one was injured, but the Comet Pizza gunman's answers about his motives are more confusing than anything else. Over the weekend, North Carolina native Edgar M. Welch, 28 years old, allegedly drove all the way up to D.C. and then reportedly walked into a pizza restaurant on Sunday with an assault rifle and opened fire, allegedly in an attempt to investigate claims that the pizza chain was operating a child sex abuse ring, linked to the Democratic National Committee. No one was physically injured.

Already, the entire incident is something to wrap your head around.

Welch told The New York Times' Adam Goldman that he has "no regrets" about his alleged course of action. After reading about what is now known as #PizzaGate on social media, Welch said he wanted to "self investigate" the pizzeria and “shine some light" on the alleged crimes that were taking place there (there are none).

Welch also told Goldman that, as he traveled to D.C., his heart was breaking "over the thought of innocent people suffering.” He meant to just go check out the place to settle his nerves after reading about it online. But when he pulled up, he told Goldman, he reportedly took an assault rifle from his car, carried it inside, and allegedly fired it in the name of rescuing children. Welch doesn't elaborate on how his plans went from a drive to scope the scene on a whim to an all-out alleged shooting. Welch just had a change of heart and decided to allegedly open fire on a place of business he assumed was breaking the law. Because he read something on the internet that claimed the business was trafficking children (it wasn't).

In case you missed it, Welch, a citizen, was going to investigate the pizzeria because of reports that he had seen on the internet linking D.C. the pizza chain to a child sex abuse ring. A simple search on the internet about PizzaGate (linking to it here would be irresponsible) reveals a conspiracy theory connecting the pizza chain to the DNC, due to the many times the word "pizza" was used in emails within the Clinton campaign — emails which were leaked by the site WikiLeaks. I know. It's hard to take in.

The PizzaGate theory assumes that every time John Podesta, former Secretary of State Clinton's campaign advisor, wrote "pizza" in an email, he was referring to child abuse at a pizza shop. (Like I said: I know. It doesn't make sense.) But to people consuming certain media, the news that the DNC was serving up child sex abuse and using a pizza shop as a cover sounded like real news, and so the theory took off.

Actually, Welch told Goldman that he doesn't believe in the idea of "fake news" and thinks the term is a way for mainstream media to hide the news of a possible child sex abuse ring inside of a chain pizza place. According to Goldman's interview with him, Welch felt that he was "really able to look into" the issue once he got internet service at his house, and said that the more he read, the more he had the “impression something nefarious was happening.”

PizzaGate is a joke. But the amount of people reading, sharing, and internalizing fake news about PizzaGate is not a joke. The D.C. shooter shouldn't be turned into a joke. What's most disturbing is that #PizzaGate is still a hashtag and a conspiracy many Americans seem to believe in. Social media perpetuates these myths. Comet Ping Pong has been harassed and its employees have received death threats in light of the fake allegations, along with other pizzerias linked to the conspiracy theory.

It was lucky that Welch didn't hurt anyone on Sunday with his alleged assault rifle. Most of all, he is lucky that he didn't injure any children inside the pizzeria, who were playing arcade games. The same children he thought he was protecting, but who were just having a good time and eating pizza on a Sunday afternoon.

Sunday's shooting was "lucky," if one can call it that. But there are people out there motivated by fake news stories and conspiracy theories all the time. Welch could have hurt someone because someone else started a very dangerous, viral rumor. Let's hope that someone soon can do something to bring an end to outrageous and dangerous stories like PizzaGate — and soon. The next time someone acts on a fake news headline, it could be worse.