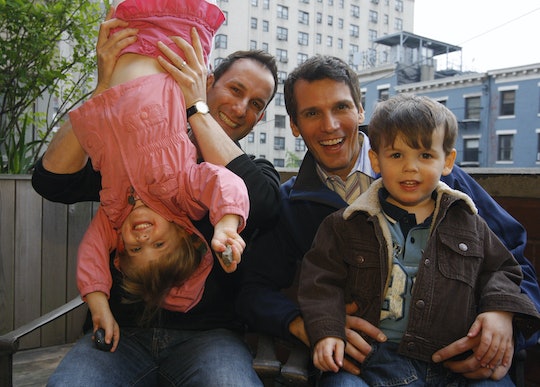 New York Wants To Legalize Surrogacy. There Are A Lot Of Moving Parts.

After trying to conceive through nine cycles of IVF, unsuccessfully, Alexis Cirel’s doctor suggested she and her husband take a different route: a gestational surrogate.

“It was a hard decision and it took months of introspection,” says Cirel, an attorney in New York City. Ultimately, she agreed with her doctor. But surrogacy wasn’t legal in her home state, and she worried about the risk that her “biological child would not be my legal child” under state law.

New York is currently one of three states (along with Louisiana and Michigan) that don’t allow surrogacy contracts (though the remaining states vary greatly in their regulation of surrogacy) but may soon join the majority, with legislation on the table to make paid (aka commercial) surrogacy legal.

In the absence of a national policy, state legality issues date back to 1984, when a couple put an ad in the newspaper seeking a surrogate. Mary Beth Whitehead, of New Jersey, responded, and gave birth to Baby M. But everything soured when she wanted to keep the baby, which was conceived with her own egg. The New Jersey Supreme Court found that the payment to Whitehead was illegal, but ruled against her on the issue of custody: Baby M. went to the intended parents, though Whitehead received parental rights.

Many people think it’s time to revisit the issue.

New York Gov. Andrew Cuomo recently launched a campaign to legalize gestational surrogacy, after a 2019 effort failed, and he has support from families, attorneys, LGBTQ rights groups, and even celebrities (Bravo’s Andy Cohen was present for the campaign announcement).

“This antiquated law is repugnant to our values, and we must repeal it once and for all and enact the nation’s strongest protections for surrogates and parents choosing to take part in the surrogacy process,” Cuomo said in a statement.

The new legislation would create protections for surrogates so they could make their own health care decisions, including whether to terminate a pregnancy; would create legal protections for parents of children conceived by reproductive technologies such as artificial insemination and egg donation; and would eliminate barriers to second-parent adoption (a single visit to court to recognize legal parenthood while the child is in utero would suffice).

Many New Yorkers use surrogates but travel to other states to use them. Repealing the bill would simply make it easier and safer for everyone involved, Cirel says. She switched from her corporate law role to become a family law and matrimonial attorney after going through the surrogacy process, and she is a member of New York’s Love Makes a Family Council, created in conjunction with the proposed law.

When Cirel learned that she couldn’t use a surrogate in her state, she shipped her embryo via a freight truck to a clinic in New Jersey, and matched with a surrogate in Pennsylvania who drove to New Jersey for the transfer. While everything was successful — twice — Cirel says taking everything out of state could have ended very badly.

“If the woman who acted as surrogate cross the state lines into New York and went into early labor, she would be the presumed legal mother of the child,” says Cirel, “and a New York court would not enforce the surrogacy agreement.”

Without a valid surrogacy agreement, the carrier would have to surrender the child to be adopted by its biological mother.

Brown says the ban on surrogacy in New York has essentially made it much more expensive and difficult for couples there to seek the treatment, as they must go out of state and are further from their surrogate as a result — an unnecessary complication and cost.

Still, this is a heated issue that has revealed divisions with the LGBTQ and feminist communities.

There are those who argue that surrogacy — a $6 billion industry, according to a 2016 Columbia University report — has major socioeconomic implications.

Feminist Gloria Steinem wrote a letter to Cuomo in 2019 that was distributed to lawmakers saying that legalizing surrogacy would leave “disenfranchised women at the financial and emotional mercy of wealthier and more privileged individuals.”

The 2016 report from Columbia University found that surrogates tend to receive up to $55,000 in compensation for the “associated costs” of surrogacy — this distinction is an important piece of dignity arguments. (Proponents of surrogacy laws that award parental rights to the intended parents in utero argue that this removes the question of whether the parents are paying for the child, since they would already be the legal parents.) Surrogates are additionally paid for their medical care, health insurance, travel expenses, and attorney fees, which can add up to more than $100,000. The report says that the surrogate’s socioeconomic status tends to vary according to where she lives: In India, surrogates are often disadvantaged, while that’s not necessarily the case in the United States.

New York State Sen. Liz Krueger voted against the bill for this reason.

“I do understand the issue of having trouble with fertility. I myself couldn’t have children,” Krueger said, speaking from the Senate floor. On the other hand, “You’re buying and selling eggs, and you’re renting wombs.”

Reproductive tech brings a host of complicated ethical and legal questions, such as the issue of who owns frozen, fertilized eggs after a divorce; the ability of a woman to consent prospectively to becoming a surrogate; the commodification of children under surrogacy arrangements, and egg and sperm donation; and the potential statelessness of a child in countries lacking laws establishing legal parenthood. Gestational surrogacy is also associated with a higher risk of gestational diabetes, hypertension, bleeding, and cesarian sections.

But the notion that the proposed New York bill would serve to take advantage of anyone is fiction, Brown says.

The requirements that surrogates have to pass to become a gestational carrier are huge, and no reputable surrogacy provider would allow a woman whom they felt was financially coerced to enter an agreement.

“This is exactly the reason why we need this legislation: The horror stories that are being tossed around about surrogacy come from unregulated or under-regulated countries,” says Brown.

Melissa Brisman, a New Jersey-based reproductive lawyer, agrees, saying this legislation could potentially affect everyone, from couples who are infertile to LGBTQ couples to single people, intended families all.

More Like This
First Look: The New Jujube x Lilo & Stich Collaboration
Explaining My Terrible Tattoo To My Kids Reminds Me Of What I Owe My Mom
18 Baby Names To Use If You Like The Name Evelyn
These Darling Baby Boy Names All Start With The Letter "D"