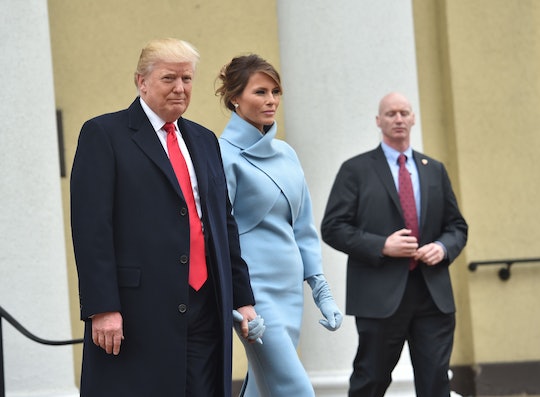 The Wrong Reason To Compare Melania To Jackie O

As Melania Trump appeared next to her husband, president-elect Donald Trump, in a powder blue ensemble, the internet exploded by comparing Melania Trump to Jackie Kennedy Onassis. Although the future First Lady and the former First Lady had similarities in their Inauguration Day ensembles, there's a lot more to being like Jackie O than fashion. Jackie Kennedy Onassis has left a legacy behind and it's not solely made up of beautiful clothes and pillbox hats. (Although it's worth noting that Jackie O's fashion choices were always on point.)

According to the John F. Kennedy Presidential Library and Museum, Onassis was a mother, first and foremost. In her work restoring the White House, she transformed it into a family home, turning a sun porch into a kindergarten room for her daughter Caroline and 12 to 15 other children. She added a swimming pool, a swing set, and a tree house on the lawn — she was determined to make it her family's home, not just an exquisite house steeped in history.

But she didn't forget the history either. The White House Museum noted that when the Kennedys moved into the White House, they found that most of the pieces in the house were reproductions of antiques and lacked a lot of authenticity. Onassis made it her mission to restore the history and grandeur of the White House and its past by redecorating the home on a limited budget. She helped to create the White House Historical Association to promote the heritage of 1600 Pennsylvania Avenue.

Onassis was also infamous for helping to promote the arts, holding important dinners and events at the White House that included artists, writers, poets, scientists and musicians mingling with politicians and statesmen. She spoke other languages, she traveled the world with her husband, and she gained good will as she was gracious and tactful with everyone she met.

Could Melania Trump be comparable to Onassis in the future? Perhaps. In fact, I hope she is. I'd love to hear how she has become a promoter of the arts, of goodwill between countries and others, and a curator of history. Heaven forbid, but if there is ever a tragedy in office, I hope she remains as strong and steadfast as Onassis did. According to The Washington Post, Oassis's love for her husband during his assassination was so strong and so pure, that she regretted wiping his blood off of her face after he was shot; she felt she should have left it there for everyone to see.

Onassis was a mother, one who suffered a miscarriage, a stillbirth, and the death of her premature baby, Patrick. She was a mother who stood at her husband's funeral with her two children, watching as her youngest saluted his father's coffin. She was a mother who restored the White House to promote the beauty of authenticity, the importance of history, and the richness of family.

She was a class act and it wasn't just because of her clothes. Trump can exude the same style as Onassis, but I hope she also exudes what Jackie O is really known for — her love, her grace, and her strength.