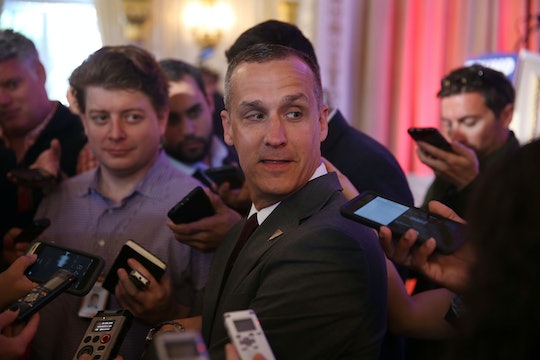 Corey Lewandowski Won't Be Charged With Battery, But The Fight Isn't Over

In March, Republican presidential candidate and business tycoon Donald Trump's campaign manager, Corey Lewandowski, was arrested for allegedly roughly grabbing a female reporter who approached Trump at a campaign event. But despite the fact that the incident most definitely took place, the Palm Beach County Florida State Attorney's Office announced Thursday that it had declined to prosecute Lewandowski, citing a lack of strong evidence to support a criminal prosecution. Although Lewandowski won't be charged with simple battery, Michelle Fields, the now-former Breitbart News reporter, plans to pursue civil action against both Trump and Lewandowski for defamation of her character, TheBlaze reported. In other words, the fight isn't over yet.

Initially, Trump vehemently denied that the incident ever happened (showcasing his propensity to try to discredit, objectify, and belittle women, no less). It wasn't just the Trump campaign that publicly called Fields an attention-seeking liar, either. Fields' own employer published a piece calling into question the legitimacy of her allegations, prompting her to resign along with the conservative publication's editor-at-large, Ben Shapiro.

Attorneys argued Thursday that Lewandowski had a "reasonable hypothesis of innocence" when he allegedly yanked Fields away from Trump hard enough to leave bruises, as the reporter attempted to ask the GOP front-runner a question. While the Trump campaign originally denied Fields' series of events, security footage soon proved Lewandowski had in fact grabbed her. (The level of force with which Lewandowski pulled the reporter back, however, was also called into question at that point, as the angle of the video footage left at least some of the public's questions unanswered.)

At the same time, Washington Post reporter Ben Terris, who witnessed the incident, swiftly backed Fields up. Fields simultaneously tweeted a mocking photo of her alleged injuries, facetiously stating the bruises must have "magically appeared."

In a strangely forward move, Fox News anchor Greta Van Susteren urged Fields this week not to bring a lawsuit against Trump or any of his staffers in a post on her website. Van Susteran explained,

Anyone encouraging Michelle Fields to bring a civil law suit is not doing her a favor. She does not want to take the stand in a civil case, subject to rigorous cross examination, that is likely to be on television to discuss a case that the DA won’t prosecute because he does not believe the evidence shows assault. Yes, the burden of proof is less in a civil case, but she is just not going to win and it will be expensive and a heartache. Even if one can win, it is not always worth it.

In a scathing remark back on March 10, Lewandowski himself called out Fields, claiming he had "never met her" before, after the reporter made remarks indicating that the manager should have known she was a Breitbart reporter. "You are totally delusional," Lewandowski wrote. "I never touched you. As a matter of fact, I have never even met you."

The fact that Lewandowski thought it would be appropriate, and even beneficial to his cause, to call the woman he reportedly pulled backward "totally delusional" is emblematic of the basic tenets of his boss's campaign, which include bulldozing anyone who disagrees with him, no matter what evidence is stacked against them. Trump's dictatorial refusal to play by anyone's rules but his own showcases a raging disrespect for all opponents — and women in particular. This stage of the legal process may be closed, but the larger battle between both sides is far from over.