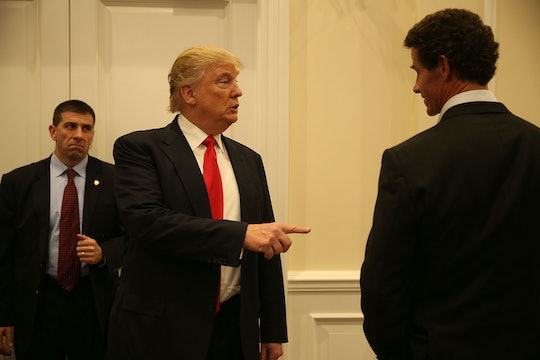 On Sunday night, reporter Michelle Fields resigned from Breitbart News, along with the conservative news outlet's editor-at-large, Ben Shapiro. It's been a tumultuous weekend for the beleaguered Fields, who was allegedly assaulted by campaign manager Corey Lewandowski at a press conference for GOP candidate Donald Trump in Jupiter, Florida, last Tuesday night. The incident, in which Fields alleged Lewandowski aggressively grabbed her arm and tried to pull her down, devolved into an ugly "he said, she said" battle over the weekend pitting the 28-year-old Pepperdine political science graduate against her own employer; Fields joined Breitbart News as a political reporter in November 2015.

Fields filed a criminal complaint against Lewandowski on Friday morning with the Jupiter Police Department, who has confirmed it is investigating a misdemeanor battery allegation that occurred at Trump National Golf Club on Thursday. And yet, both the Trump campaign and even Fields's own employer, Breitbart News, sought to discredit her account of what happened — despite an abundance of evidence that gives compelling credence to Fields' allegations. When there are so many alarming things this incident brought to light: increased violence at Trump rallies, suppression of the media, employer-endorsed backbiting — it's no wonder that Fields resigned. Worst of all is a what appears to be coordinated smear campaign to punish her for speaking out. Trump's campaign denied all of the allegations in a statement released to ABC News:

Fields wrote about the alleged battery on Thursday for Breitbart News, saying:

I never sought to be part of the story... Many people have been asking me on Twitter and in emails what exactly happened Tuesday night. I hope this article answers those questions and I can get back to reporting the news, not being a part of it.

Fields then tweeted a photo of the bruises she allegedly received from the altercation:

After his campaign issued a denial of the incident, Trump even claimed that "perhaps she [Fields] made it up."

The next morning, fellow reporter and senior editor-at-large at Breitbart, Joel B. Pollak, wrote his own article about the incident, calling into question the legitimacy of Fields' allegations through some kind-of-low-rent, CSI hit piece on Fields as he analyzed stills of video footage captured at the time of the incident. Not once does Pollak include any statement from Fields. This piece was published by Fields' coworker and on Breitbart's, her employer's, website. On Monday, it was revealed through leaked internal messages that Pollak effectively shut down Breitbart News staffers from talking about the incident or defending Fields.

And yet, less than 24 hours prior, Larry Solov, Breitbart News CEO and president, said in a statement: "We are disappointed in the campaign’s response, in particular their effort to demean Michelle’s previous reporting." These words ring tremendously hollow when the news outlet attempted to discredit Fields the following morning. Breitbart did not immediately respond to Romper's request for comment.

Even Lewandowski, Trump's campaign manager, couldn't resist trying to paint Fields' allegations as a pattern of "attention seeking" in her reporting career:

So what could have led to this event developing as one that painted Fields as the problem instead of an alleged victim? Follow the money: An August 2015 BuzzFeed report alleged that Trump has actually paid Breitbart News for favorable coverage:

According to four sources with knowledge of the situation, editors and writers at the outlet have privately complained since at least last year that the company’s top management was allowing Trump to turn Breitbart into his own fan website — using it to hype his political prospects and attack his enemies.

This is more than trying to put some kind of epic spin on a story that's already spiraled into the national spotlight. Trump's — and people's treatment, generally, of Fields — is a coordinated manipulation tactic known as "gaslighting," A term that originated from the 1944 movie, Gaslight, whereby an abuser attempts to discredit, invalidate, or otherwise distort reality that causes their victim to doubt their own understanding of events, even to the point of questioning their own sanity. This isn't an exercise in journalistic acrobatics: Gaslighting is a form of mental abuse.

The abusers in this situation are more than just Lewandowski, as Fields alleged — but include the Trump campaign, and now even the public, generally, who have sought to invalidate and discredit what happened. In 1944, there were no smartphone videos that could be immediately uploaded to Vine. There was no way of showing millions of people physical marks of abuse received. And yet, with a plethora of evidence — including audio and video of Fields' and Lewandowski's encounter — the Trump machine, with the help of news organizations, continues to keep the gaslights lit in a calculated effort to quash Fields' claims and legitimize Trump.

All of this reads like some jacked up subplot in House of Cards, and yet, this is real life: this is actually all wrapped up in the convoluted and increasingly dangerous rhetoric of a business tycoon who could actually become president of the United States.