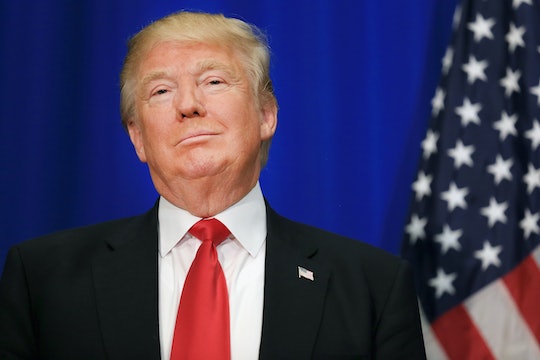 Now that Super Tuesday has come and gone, the delegate race to each party's presidential nomination in July is on like Donkey Kong. For the GOP, delegate numbers are especially crucial moving forward — given that the one person the GOP doesn't want to see as their nominee continues to wrack up the votes with frightening momentum. What does Donald Trump's Super Tuesday victory mean for Republicans? It means that the country is one step closer to a Trump nomination, and, more terrifyingly so — a Trump presidency, if elected. And, with record GOP voter turnout this primary cycle, that's not such a far-fetched idea.

First, let's look at the GOP race so far in numbers: There are 1,784 delegates available, but only 1,237 are needed to secure the GOP nomination. Trump currently has 316 pledged delegates. Texas Sen. Ted Cruz has 226 delegates, followed by Florida Sen. Marco Rubio with 106. Ohio Gov. John Kasich has 25 delegates and — God love him — former neurosurgeon Ben Carson has eight. (But Carson said he's kind of suspending his campaign on Wednesday). Just looking at the numbers, Trump already has one-quarter the delegate count needed to win the nomination — and that mathematical realization has the Republican party ready to crap its pants.

In an interview with Jeremy Hobson on WBUR's Here & Now on Tuesday, Republican strategist Henry Barbour got at the heart of why a Trump nomination seems counter to GOP party values:

As of today, it would be very hard for me to vote for Donald Trump — and the Klu Klux Klan thing is a big part of it. I'm pro-life: He funded abortions by giving money to Planned Parenthood and that's a real problem for me. He can argue that he's now pro-life — and maybe he is — but, you know, he says a lot of things.

The takeaway here is that no one with connections to the GOP establishment wants to see Trump rise to a position of power more than he already has. And yet, the voters keep a'comin. So how on earth does Trump manage to maintain such a considerable lead? It all comes down to how Barbour framed Trump's campaign with: "He says a lot of things." And it's all those "things" Trump's talking about that has driven the momentum behind his campaign. But that's all they are — things, ideas, fluff: There's no real substance to Trump's campaign strategy.

I've previously compared the Republican primaries to a surreal game show, like some messed up version of Whose Line Is It Anyway? — where everything's made up but the points do matter. And when you look beyond the showmanship, Trump's position statements read like rambling tirades from The Apprentice before they read like actual presidential policy.

Trump's primary counterparts are trying very heard to steer the talking point ship back to the issues, but Trump's having none of it. Trump is a master of media marketing: He knows how to sell his words so that you never really pay attention to the substance — or complete lack thereof — of what he's actually saying. Case in point: Trump's Twitter feed. It's impressive in its ability to completely spin his fellow candidates' characters without talking about anything of actual substance:

Notice a pattern? "Wacko" Bernie Sanders. "Low energy candidate" Jeb Bush. "Lying" Ted Cruz. "Little" Marco Rubio. It doesn't matter what follows each of these characterizations — he's already got you hooked on the idea that each of his competitors are beneath him. If it weren't so terrifying that this kind of marketing logic could propel a man with absolutely no political experience into the highest office in the country, it would be brilliant.

Early on in the race, Trump saw huge turnouts in New Hampshire because of his celebrity — no different than when paparazzi swarm a star walking down Hollywood Boulevard. Trump carries a certain spectacle about him. But now people are actually taking Trump — and his dangerous ideas — seriously. What's changed about Trump since New Hampshire to now? Nothing — and that's the scariest thing.

Voters are flocking to Trump's rallies like moths to a celebrity flame, and they're getting burnt up with passion for non-causes, that is, causes without any kind of substance. It's all smoke and mirrors — and it feels like GOP voters are caught up in some kind of weird game where, each week, a new contestant gets voted off the island: Graham, Christie, Bush. Who will it be next week? Text your support now to #123GOP to save your favorite candidate!

But this isn't a game, despite what Trump would have you think. This is the future of our nation. So why are GOP voters treating it like some kind of joke? Because I'm certainly not laughing. In fact, I'm f*cking terrified — and you should be too.