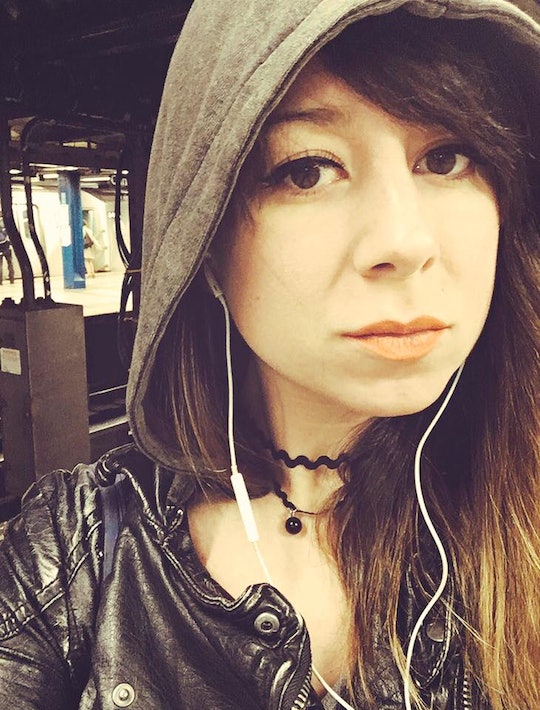 The One Thing We Need To Know About Sexual Assault Victims

The first person to call me a victim was a police officer. "The victim is 5'6'', approximately 115 pounds, and claims to have been raped by a coworker," he nonchalantly said into the radio hanging from his shoulder, as if he was a 10-year-old NBA fan proving he'd memorized the stats of his favorite player. Since that day, five years ago, a lot has changed. Now, people prefer to call me a sexual assault survivor. It sounds nicer. More inspiring. Hopeful. I'm not always those things, though. So please, don't call me a sexual assault survivor. I'm a victim.

I don't spend a signifiant amount of my time or consciously clear a large portion of my headspace to think about the ways others choose to identify me. In my 30 years of life, I've learned that so much of how others perceive me is entirely outside my control. Then Bachelor In Paradise made headlines for an alleged "misconduct" between 24-year-old Corrine Olympios and contestant DeMario Jackson, in which Jackson and Olympios were engaged in sexual activity while Olympios was too drunk to give her consent. The show was suspended, sparking the kind of victim blaming and finger-pointing all alleged victims of sexual assault can come to expect.

On Wednesday, Olympios released a statement via spokesperson Stan Rosenfield which read:

I am a victim and have spent the last week trying to make sense of what happened the night of June 4. Although I have little memory of that night, something bad obviously took place, which I understand is why production on the show has now been suspended and a producer on the show has filed a complaint against the production.

I am in no position to speak for Olympios in any capacity, so I cannot say that her using the word "victim" instead of "survivor" was a conscious, intentional choice. But other women have. In a tumblr post from Feb 4, 2014, author, activist, and feminist Roxane Gay wrote:

Jessica Valenti, author and feminist, elaborates further in her book Sex Object: A Memoir, highlighting how women who have been through traumatic events are expected to share the stories of those events in a way that is both uplifting and comfortable:

Despite the well-worn myth that feminists are obsessed with victimhood, feminism today feels like an unstoppable force of female agency and independence. Of positivity and possibility. Even our sad stories, of which there are money, have their takeaway moral lessons or silver linings that allows us to buck up, moving on, keep working. This is not just a survivor technique but an evangelizing strategy, and a good one at that. But maybe we're doing ourselves a disservice by working so hard to move past what sexism has done to us rather than observe it for a while. Maybe it's okay if we don't want to be inspirational just this once.

Olympios saying "I am a victim," whether an explicit choice or not, was all I needed to read before I was catapulted back into the details of my own sexual assault, from the night my coworker forced himself on top of me behind a locked door, to the invasive 5-hour rape kit in the emergency room of a Portland, Oregon hospital the day after, to the nightmares and the Post Traumatic Stress Disorder (PTSD) and the aversion to sex. Then there was the fear of going out in public alone, the need to self-medicate with drugs and alcohol, the need to have sex with strangers in order to feel as though I was in charge of my body and my sexuality, and the bulimia that left a permanent scar on the knuckles of my right hand. There was the triggers of my loss of bodily autonomy when I was pregnant, when I was going through labor and delivery, and when I was breastfeeding my son. I couldn't separate feeding my newborn with the act of someone raping me.

Here's the one resounding fact about sexual assault: it happens to someone. They do not do this to themselves. Someone, and sometimes more than one person, does it to them.

I thought about everything I endured as the result of a man truly believing he had the unequivocal right to my body — everything I was forced to face after countless hours of therapy and close calls that put my life and my mental health in jeopardy — and I remembered the one resounding fact about all sexual assault: it happens to someone. They do not do this to themselves. Someone, and sometimes more than one person, does it to them.

When the term "survivor" is thrown around without enough thought as to what the victim has actually survived, the traumatic events that have transpired are glossed over. Focus shifts not to why this individual (usually a woman, though men can and are certainly victims of sexual assault, too) is being forced to pick up the pieces of their shattered life, but how. The question of what was done to them falls by the wayside, replaced by an inquisition into how they're handling it. The perpetrator stays in the shadows, rarely discussed and held unaccountable, while society at large judges how a victim of sexual assault came to be a victim, how they handled the ordeal, and whether or not their inevitable healing is done in a way that's deemed "appropriate" and "timely."

If Olympios is calling herself a victim, it's because something happened to her. Something she doesn't have to package in a way that makes it easier for others to digest.

I don't know the details of the alleged events that transpired during the filming of Bachelor in Paradise, but I do know that if Olympios is calling herself a victim, it's because something happened to her. Something she doesn't have to package in a way that makes it easier for others to digest. Something she doesn't have to apologize for, or make excuses for, or "get over" in what society has arbitrarily deemed an acceptable amount of time in which to mourn and heal.

I am not a survivor. I am a victim, who has been forced to survive.

Because I do know what happened to me, five years ago at a work retreat and against my will, without my consent, and despite my best efforts to fight back. I know that my sexual assault is something I will never fully heal from or completely survive; it has left me tattered and bruised in places I cannot hide from or cover up. It has left me with the acute knowledge that healing does not have an end point, but is circular in nature and never-ending. One day I will be fine and fearless; the next I will struggle to get out of bed, or will close my eyes, count to 10, and focus on my breathing when a man brushes up against me on a crowded subway.

There is no silver lining or happy ending in which I can turn my sexual assault into a positive, because there's nothing positive about sexual assault. I am not a survivor of victimization. I am a victim, who has been forced to survive.