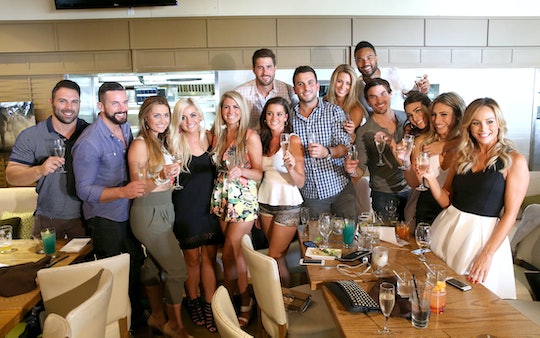 'Bachelor In Paradise' Just Taught Us A Lesson About Consent

Yesterday, reports surfaced that production on ABC's Bachelor In Paradise was suspended indefinitely, due to allegations of "misconduct" on set. According to initial reports from TMZ and BuzzFeed, 24-year-old Corrine Olympios, a contestant on the last season of The Bachelor, had a sexual encounter with contestant DeMario Jackson, reportedly while she was too drunk to give her consent. The alleged encounter was caught on film by a producer, who described it as "uncomfortable" because of Olympios' level of intoxication. While the specific details are still unclear, the rumors of sexual assault on the set of Bachelor in Paradise teach us an important lesson about consent.

As rumors of the show's impending cancellation swirled on social media, fans of the show took to Twitter to voice their displeasure. Their ire wasn't directed at Jackson, nor were they outraged that the alleged sexual assault had been caught on camera, instead of a producer rushing in to intervene. Instead, they were angry that a drunk woman had essentially "ruined" their favorite reality show. Furthermore, many blamed Corinne for the alleged assault, arguing that it was "no surprise" that she ended up in such a position due to her history of promiscuity.

Romper has reached out to both Olympios and Jackson, and we will update if we receive a response. In response to Romper's request for comment, Warner Bros. spokesperson Paul McGuire said in an email:

We have become aware of allegations of misconduct on the set of “Bachelor in Paradise" in Mexico. We have suspended production and we are conducting a thorough investigation of these allegations. Once the investigation is complete, we will take appropriate responsive action.

Immediately following the incident, I was reminded of a situation 5 years ago, when I sat in front of a police officer and reported my own rape. As I recounted the assault, the officer stopped me and asked, "Well, how much did you have to drink?" At that moment, I was reminded how our society views the concept of consent. Both that police officer and Bachelor in Paradise fans seemed to believe that if alcohol is involved in a sexual encounter, there is no need for both parties to provide consent. They seem to believe that the absence of explicit consent is considered actual consent. But that couldn't be further from the truth.

According to the Rape, Abuse & Incest National Network (RAINN), an average of 321,500 victims, age 12 and older, are victims of rape or sexual assault every year. Conservative estimates suggest that 25 percent of American women will be sexually assaulted in their lifetime, according to the National Institute on Alcohol Abuse and Alcoholism. Half of those cases, according to the same organization, will involve alcohol consumption by either the perpetuator, the victim, or both. Most of these alcohol-involved sexual assault are committed by someone the victim knows, according to a grant-funded study by the National Institute on Alcohol Abuse and Alcoholism.

Those estimates, while staggering, are also considered on the low end of the actual reality involving sexual assault and alcohol consumption. People (especially young people) get drunk and have sex all the time, and sometimes, the boundaries of consent can become blurred — yet many survivors who drank alcohol don't tell anyone about it, for fear they will not be believed or, worse, that they will be blamed for it, as myself and Corinne were.

The premise of reality dating shows like The Bachelor and Bachelor In Paradise isn't a secret. Those who tune in every week know that producers stage and facilitate romantic situations between contestants, often encouraging dramatic results — and most of the time, alcohol is involved. Still, the presence of alcohol does not mean the need for consent no longer exists. If a woman on a date has some cocktails to calm her nerves, the person she is having drinks with is not off the hook when it comes to seeking consent for any and all physical contact.

The presence of alcohol doesn't give a man a right to a woman's body. It doesn't take the blame away from assailants. And it certainly doesn't give those upset about the potential cancellation of a reality dating show the right to look at an alleged victim of unwanted sexual activity and say, "Well, you were drunk, so this is your fault."

Blaming the victim doesn't help. Blaming alcohol itself doesn't help. We must, first and foremost, blame the cultural belief that a woman under the influence isn't a woman worth respecting.

Sadly, however, blaming "drunk girls" for sexual assault is nothing new. In March of this year, Lindsey Kushner, a judge in the United Kingdom, told women they were "at greater risk of being raped if they got drunk." She went on to say women could "drink themselves into the ground," but that their "inhibited behavior could put them in danger and they were less likely to be believed than a sober victim." In 2015, the Office For National Statistics (ONS) published a study reporting more than a quarter of the public believse drunk victims of rape or sexual assault are at least partially responsible for what has happened to them. Instead of looking at how assailants use alcohol as a weapon to subdue their victims, victim-blaming rears its ugly head, silencing victims and allowing the cycle of sexual assault to continue.

Five years ago, when I was sexually assaulted on a work retreat, I told my then-boyfriend I was going to the nearest emergency room to get a rape kit. The first thing he said to me was, "I told you so. You should't have gone on that trip, and you should't have been drinking." Unfortunately, now Olympios will be hearing much of the same on Twitter or from former Bachelor contestants like Chad Johnson, who tweeted he was "excited for The Bachelor In Pornadise."

Until our society decides to look at the ways in which rape culture enables men to use alcohol as an excuse to violate women's bodies with impunity, the high rates of alcohol-fueled sexual assaults will continue. Blaming the victim doesn't help. Blaming alcohol itself doesn't help. We must, first and foremost, blame the cultural belief that a woman under the influence isn't a woman worth respecting.