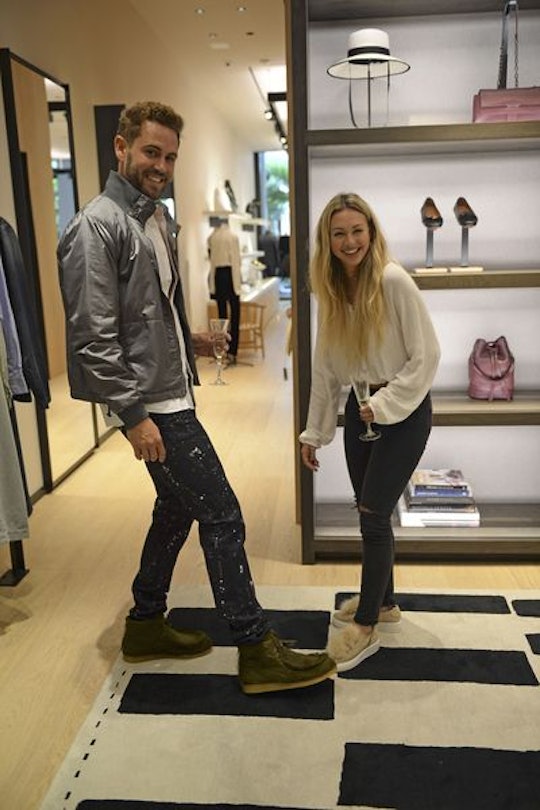 Now that Season 21 of The Bachelor is coming to an end and Nick is this close to choosing his potential future wife, it's totally OK for all of the Team Corn, a.k.a. Corinne supporters, to come out of hiding. Somehow it's become somewhat taboo to love the season's so-called "villain," but by now we all know that Corinne is just the realest Bachelor contestant of them all. And Corinne Olympios' Snapchat proves that she is just as fun and interesting in real life too.

It's no big secret that Corinne came across as overly confident and territorial to the other women on The Bachelor this season, but that was because she was all about playing the Bachelor game the best way she knew how. It's amazing that some of these women end up leaving with real friendships, but Corinne saw early on that the main prize was Nick and naturally, she went after that above anything else.

But her social media accounts show the silly Corinne that can laugh at herself and yes, make friends on The Bachelor, so really she's got the best of both worlds going on. In her most recent Snapchat video, Corinne is in what looks like a club, cheek to cheek with a BFF, shouting, "It's Britney, b*tch!" Don't say you don't want to be her new best friend now.

In case you're now finding yourself wanting to stay up-to-date on all of her antics, Corinne's Snapchat name is Colympios and The Bachelor constant seems like a lot of fun when she isn't getting the villain edit treatment from producers. Now, I'm not saying that she hasn't ruffled feathers or that her short-lived but intense rivalry with Taylor wasn't hard to handle, but Corinne seems to be able to see the humor in all of that too. Shortly after the New Orleans two-on-one date that ended with Taylor being sent home, Corinne snapped photos with her Taylor voodoo doll and it was amazing.

The Snapchat story also included Corinne's living room or hotel room where she was watching the very same Bachelor episode while she cuddled her Taylor voodoo doll. Obviously it was all in good fun though, which further proves that Corinne can enjoy naps, hate farmwork, and still be so much fun in real life.

Back in January, when Corinne was talking about her nanny Raquel on The Bachelor, she wasn't being shy about addressing that in real life either. One Redditor posted a photo from Corinne's Snapchat at the time, proving that Corinne could care less about what anyone thinks of her or her relationship with Raquel. And after seeing her nanny on The Bachelor hometown date, who doesn't also love Raquel now?

From Day 1, Corinne has been upfront about who she is, what she does, and what her life is like. And even with some outright Team Corn fans ready to support her, it seems like she's easier to like in real life and her Snapchat totally proves that fact.