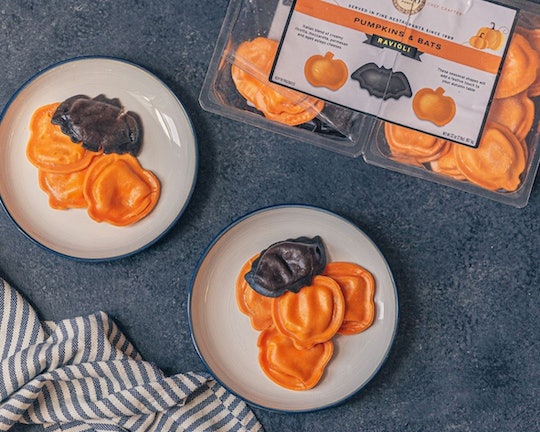 Halloween is the best holiday of the year, and up until now, its foodstuffs has been relegated to candy, chocolate, and funky, smoky cocktails. This year, that's all changed because Costco bat and pumpkin ravioli is now a thing, and it's glorious.

Spotted by popular Instagrammer Costco Buys, pasta maker Nuovo is bringing spooky flavor and fun seasonal shapes to Costco's pasta section. Filled with ricotta, mozzarella, parmesan, and aged asiago cheeses, these black bat and orange pumpkin-shaped ravioli are the perfect pasta dinner for your Halloween celebration. As it is being sold at Costco, you know you're going to be getting generous portion. This pasta is being sold in 32-ounce packages, or about 10 servings, for around $9.

It's a pretty basic ravioli, so it would not be hard to dress it up. Sure, you could go for a classic tomato basil sauce from a jar, and it would be delicious.But, hear me out: I think that if you're serving this, you should fully lean into the holiday. I would head over to Costco's freezer section and grab a bag of cubed butternut squash, then I would add butter, chopped walnuts, maple syrup, pepitas, and fresh sage.

As you're cooking the ravioli, brown the butter, and toss in the squash, and cook until the edges are caramelized. Then add a handful of chopped walnuts and cook just until you can begin to smell toasted nuts. Add a small chiffonade of sage, and a drizzle of maple syrup. Pour this mix over the drained ravioli and serve with a bright endive and radicchio salad.

If that's not your cup of tea, consider making a light alfredo sauce of butter and parmesan, and serving it with Costco's famous rotisserie chicken. Another option would be to wilt a box of Costco's baby spinach in olive oil, butter, garlic, and red pepper flake, and then toss it with the ravioli, giving the pasta a little heat for the cold weather.

Honestly, my favorite way to serve ravioli is deep fried. All you need to do is dredge the ravioli in flour, then toss in raw egg, back into the flour, and then fry in 325 degree oil until it's golden brown and then salt it. Do not boil it first — it won't work that way.

Needless to say, this must be served with either Costco's pumpkin pie, their harvest cheesecake, or their notoriously large pumpkin rolls, which manage to find their way into my cart with alarming frequency during this time of year. They're just too delicious to pass up.

And yes, Costco has Halloween shaped ravioli this year, but they also have a ton of other seasonal goodies. You would be remiss if you did not try their pumpkin beers, giant apple pie, or fresh apple cider. In fact, the best beverage accompaniment I can think of for this pasta would be a hot spiced cider. It's up to you whether or not you want to add brandy, but I strongly suggest that you do. It's life-changingly good.

Long has Halloween been left to falter, considered only for its candy and alcohol-fueled gaiety, with ghoulish gourmands left to wonder about the variety of apple for which they bobbed, or if the caramel covering the popcorn was artisanal. But now that Costco has Halloween shaped ravioli, this holiday is getting the foodie makeover it deserves.

Sure, I'm still going to eat entirely too much Snickers and candy corn (it's the best, don't @ me), but now I'm also going to temper it with too much cheese and too much butter, because holidays are for excess, and I am really good at celebrating.