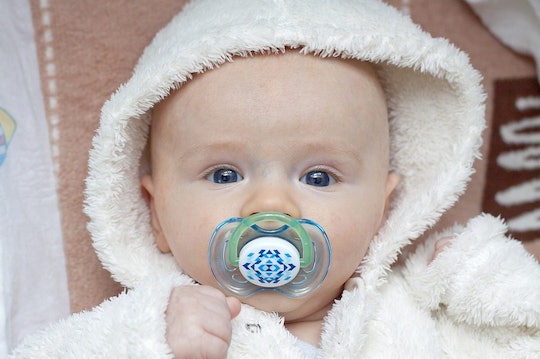 A Pacifier Warning All Parents Should Read ASAP

Everybody knows you have to watch what babies put in their mouth, but what if something that's specifically made to go in their mouth is a risk? I've never been concerned about pacifiers before, but one dad's viral warning has parents wondering about the safety of the soothers. Could a baby choke on a pacifier?

Beware, my daughter nearly choked on this Tommee Tippee soother yesterday morning. If it wasn't for my wife's quick thinking I'd hate to think what would of happened. My daughter turned blue and Sam had to remove the teat from her throat. My main concern is it's an owl dummy (associated with night) so people will be using it at bed time. I don't think my daughter would be here now if this happened in the middle of the night.

Romper reached out to Wilson for additional comment but did not hear back at the time of publication. Romper also reached out to Tommee Tippee and received a statement from a spokesperson about this story:

The safety and well-being of babies is at the heart of absolutely everything we do, so we're taking this extremely seriously. We're very sorry that Earl and his wife and daughter have had this experience; it must have been very distressing for them. We're going to investigate this thoroughly, and have already spoken to Earl's wife, Sam, to arrange to get the pacifier back so we can examine it.

We produce and sell over 15 million pacifiers globally every year, and it is extraordinarily rare for customers to have issues with the baglet. However, like all other pacifier manufacturers, we always advise parents to pull the pacifier in all directions and look for bite marks before every single use, and throw away at the first signs of damage or weakness.

The spokesperson for Tommee Tippee followed up with their contact information and says, "Anyone with any questions or concerns about our pacifiers can contact us via our Facebook page or via our Careline at 1-877-248-6922."

So how big of a risk is a pacifier? A quick Google search brings up a lot of stories similar to Wilson's — and the concern parents have isn't just specific to one brand. According to the website for the TODAY show, a 5-month-old baby swallowed a pacifier whole and had to be rushed to the emergency room where surgeons had to surgically remove the pacifier, which had started falling apart. Dr. Matt Warpinski, a doctor working at the time the child was brought in, told the TODAY show that in 10 years of emergency medicine, he had never seen or heard of a child choking on an entire pacifier.

I haven't either, and my own daughter used the Tommee Tippee pacifier in question. In fact, according to research published in the journal Pediatrics, pacifiers have been connected to significantly reducing the risk of SIDS, especially when used for sleeping. But as Wilson's Facebook post warned, the thought of a child using a pacifier at night and potentially choking on it is horrifying. "I don't think my daughter would be here now if this happened in the middle of the night," Wilson included in his post.

So does that mean swearing off pacifiers? Not exactly. The American Academy of Pediatrics (AAP) warned that pacifiers made of two pieces could potentially come apart and be a choking hazard to children. Instead, the AAP recommended using only pacifiers that consist of one piece.

Although it sounds like the pacifier that broke apart with Wilson's daughter might be one of the two piece models the AAP has warned parents about, there's no way of knowing exactly what happened until Tommee Tippee is done investigating the incident. And that doesn't mean that Tommee Tippee is the only brand this could happen to. The truth is, every baby toy and item comes with its own list of concerns. If you have any concerns about your child's pacifier use, talk to your pediatrician to make sure you're using the right size pacifier for your child, that the pacifier isn't damaged or weakened, and other warning signs that a pacifier may no longer be safe.