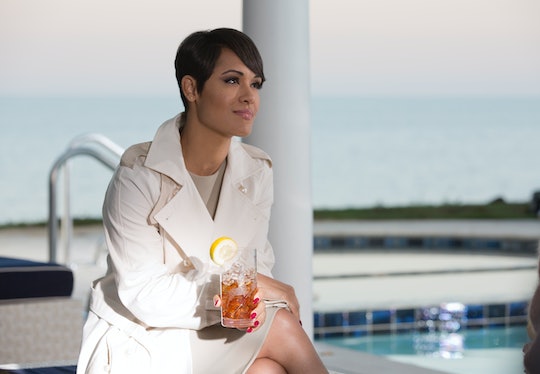 Could Anika Die On 'Empire'? The Lyons Could Mourn Another Death

The Empire Season 2 finale "Past Is Prologue" is almost upon us, and the teaser's glimpses of a funeral scene mean that someone isn't returning for Season 3. Showrunners left us hanging in the penultimate Season 2 episode, not revealing whether or not Jamal would survive his shooting at the hands of Freda Gatz. And while it seems unlikely that they would resolve the cliffhanger for us in the trailer for the next episode, we also see a glimpse of Anika about to throw herself off a balcony, setting up the question: will Anika die on Empire?

She's about to have a very dramatic finale episode, regardless of whether or not she dies. First of all, we know that Rhonda will confront her in an explosive physical altercation over getting pushed down the stairs in the midseason finale. She's been having flashbacks of seeing Anika's red-soled Louboutin shoes while lying at the foot of the staircase just before losing consciousness, and Rhonda finally publicly accuses Anika. After lunging at and choking Anika, Rhonda gets a punch in too, before Andre pulls her off.

"And in that moment, you are still not sure if she really, really did it," says Grace Gealey in the below interview preview clip. "And that's what makes it interesting. Because you're either going to choose to love her, because you know she didn't do it, or hate her, because you know she did do it, or continue to love to hate her because she fools you possibly this entire time."

So it's possible that Anika's guilt over killing Rhonda's baby is a factor in her attempt at suicide. But we also hear her say "They're going to make me testify," as she's balanced precariously on the balcony.

Feds, specifically Cookie's sister's boo, have picked up Anika for questioning in the litany of charges they're pursuing on Lucious. It's unclear why Anika would be so torn up about testifying that she would throw herself off a building, but it's possible that she's implicated in some of Lucious' crimes. She did used to be his fiancée, after all. Or maybe she fears that testifying against Lucious will destroy him and thus, destroy the legacy of her gestating baby Lyon. Either way, she fesses up to Lucious and Cookie about the FBI questioning her quickly, and they immediately launch into a plan to "tuck" her away from them. With Jamal at death's door and Anika carrying the heir to the Empire, it looks like we're going to lose a Lyon any way you slice it.