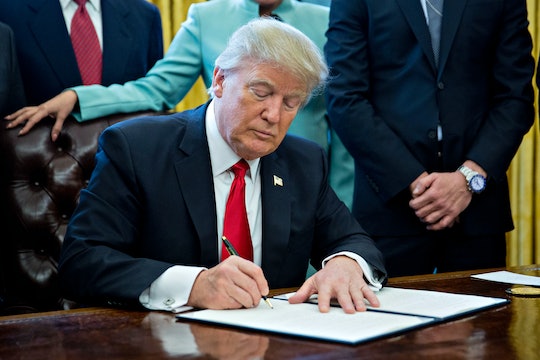 In a nod to his pre-White House days as a reality TV star, President Donald Trump tweeted Monday that he will be announcing his nomination for the Supreme Court of the United States during primetime Tuesday. According to CNN, Trump will make the live announcement at 8 p.m. in the hopes of drawing the largest possible audience (we all know Trump cares about ratings) — and given the future implications of his choice, it's likely that there will be a lot of people tuning in. Like the late Supreme Court Justice Antonin Scalia, whose seat Trump's nominee would potentially be filling, it's expected that Trump will opt for a very conservative judge as his appointment. Could the Supreme Court overturn same-sex marriage? With the balance of power once again leaning to the right, it would be possible — but not particularly likely.

Following Scalia's death last year, the Supreme Court has been evenly split with an equal number of Republican and Democrat judges. Though President Obama did attempt to fill the empty seat by nominating Judge Merrick Garland, Senate Republicans refused to even consider a new SCOTUS nomination until after the Nov. 8 election, according to NPR. And that was a gamble that paid off in their favor: now that Trump is in the Oval Office, a Republican judge is all but guaranteed, meaning it won't be at all surprising if some of the court's more contentious previous rulings end up overturned, or just dismissed entirely.

But what about same-sex marriage, a right that became legally guaranteed to every American under the Constitution when the Supreme Court ruled in favor of it in a 5-4 vote in June 2015? That's a little murkier. Part of the reason is that Trump himself hasn't even been clear on his feelings on the issue. Shortly after the election, for example, Trump told 60 Minutes that he was "fine" with the SCOTUS ruling on same-sex marriage, and that, as far as he was concerned, the matter "was already settled," according to CNN. But in earlier remarks, Trump indicated that he wasn't at all pleased with the Supreme Court's decision, and said that he thought same-sex marriage was a decision that should have been left to the states.

In October 2015, Trump told Christian news outlet CBN that the country has "some very terrible Supreme Court justices," and that "frankly, they should have at least [left same-sex marriage] as a state's right issue." Three months later, in January 2016, he told Fox News's Chris Wallace that if he had the chance to nominate a SCOTUS judge, his pick could ultimately mean that the ruling would change:

If I'm elected, I would be very strong on putting certain judges on the bench that I think maybe could change things. They have ruled on it. I wish that it was done by the state. I don't like the way they ruled. I disagree with the Supreme Court from the standpoint they should have given the state — it should be a states' rights issue. And that's the way it should have been ruled on, Chris, not the way they did it.

When Wallace then asked Trump outright if he would specifically "try to appoint justices to overrule the decision on same-sex marriage," Trump responded that he "could strongly consider that, yes."

Trump, for one, has made no secret of being a fan of Scalia, and during the second presidential debate in October, he said he intended to appoint a Supreme Court justice “in the mold” of the late judge if he won, according to The Advocate. After the 2015 ruling, Scalia himself issued a scathing public dissent to the court's decision, according to Mother Jones, in which he wrote,

If, even as the price to be paid for a fifth vote, I ever joined an opinion for the Court that began: ‘The Constitution promises liberty to all within its reach, a liberty that includes certain specific rights that allow persons, within a lawful realm, to define and express their identity,’ I would hide my head in a bag. The Supreme Court of the United States has descended from the disciplined legal reasoning of John Marshall and Joseph Story to the mystical aphorisms of the fortune cookie.

As far as speculation over Trump's nominee, it's possible that his pick could be just as conservative, if not more so, than Scalia was, according to FiveThirtyEight. And one thing Trump has been clear on is that he definitely intends on appointing anti-abortion judges, according to CNN. But even if Trump did feel unhappy about the Supreme Court's ruling on same-sex marriage, the fact that it's a less contentious issue than that of abortion (according to the Pew Research Center, the majority of Americans now support it) means that the Supreme Court wouldn't be particularly likely to consider reversing its decision, even if a super conservative judge was appointed.

Of course, even if same-sex marriage rights continue to be guaranteed, the fact remains that there are many other issues at stake once Scalia's seat is filled, including abortion, transgender rights, affirmative action, immigration, climate change, and access to contraception, among others, according to The New York Times. And given the backlash Trump has already faced during his first week in office? It's reasonable to assume the outcome of those cases aren't likely to be ones that will go over well with many Americans.