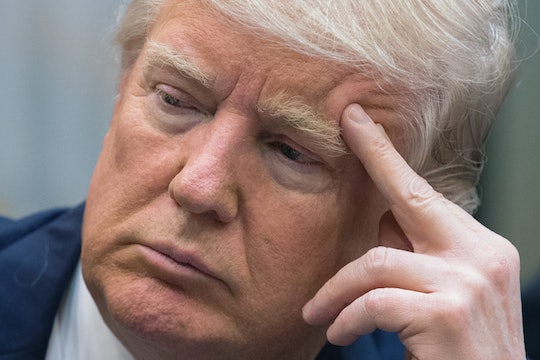 MSNBC's Rachel Maddow made a big announcement on Tuesday; she had gotten her hands on President Donald Trump's tax return. After months of refusing to release his tax return information, Maddow tweeted on Tuesday that she "Had Trump's tax return" and would be analyzing them with Pulitzer Prize-winning journalist David Cay Johnston live on Tuesday night. There was a collective intake of breath on the internet — a long pause as we all waited to find out what information might be hiding within the documents — and whether Trump's tax returns would be grounds for impeachment.

For those who missed it, Maddow revealed two pages of Trump's 2005 tax return. Johnston, a longtime investigative journalist who released the bestselling biography The Making Of Donald Trump from his three decades of reporting on Trump, allegedly found the 2005 tax return in his mailbox, according to Wired. Trump's 2005 tax return showed he earned a total of $150 million that year from several real estate developments and other businesses, and that he paid $38 million in taxes. The White House issued a statement confirming the information discovered in Trump's tax return before Maddow's show aired, according to CBS News:

You know you are desperate for ratings when you are willing to violate the law to push a story about two pages of tax returns from over a decade ago. Before being elected President, Mr. Trump was one of the most successful businessmen in the world with a responsibility to his company, his family and his employees to pay no more tax than legally required. That beings aid, Mr. Trump paid $38 million dollars even after taking into account large scale depreciation for construction, on an income of more than $150 million dollars, as well as paying tens of millions of dollars in other taxes such as sales and excise taxes and employment taxes and this illegally published return proves just that. Despite this substantial income figure and tax paid, it is totally illegal to steal and publish tax returns. The dishonest media can continue to make this part of their agenda, while the President will focus on his, which includes tax reform that will benefit all Americans.

The information found in Trump's 2005 tax return was not especially noteworthy; the president won't be impeached for a tax return that showed he earned a lot of money and paid a proportionate amount of taxes. Which is why Democrats are asking Americans to keep their eye on the prize, essentially; don't get distracted by tax returns when there are much more serious issues at stake within the Trump administration. Issues that will impact every single person in America, like the new health care plan being proposed by House Republicans with the full support of the White House behind it. A plan that, if implemented, would see millions of Americans without access to health insurance.

Democrats have been tweeting reminders to the public to stay focused on the very real, very serious issue of health care under Trump's watch, rather than getting distracted by a tax return from over a decade ago.

Johnston, the journalist who found Trump's tax return in his mailbox, also cautioned against getting distracted; even going so far as to tell Maddow that he suspected Trump himself may have planted the information, according to Wired.

It’s entirely possible that Donald sent this to me. Donald Trump has over the years leaked all sorts of things, the very sleazy girl-on-girl pictures of the first lady in The New York Post may have come from Donald. The front pages of the state tax returns… that were sent to The New York Times… last fall may have come from Donald. Donald has a long history of leaking material about himself when he thinks it’s in his interest.

Whether the information was planted by Trump, or by another party seeking to distract the American people from the disastrous new health care plan, the best way to push back is to simply stay the course.