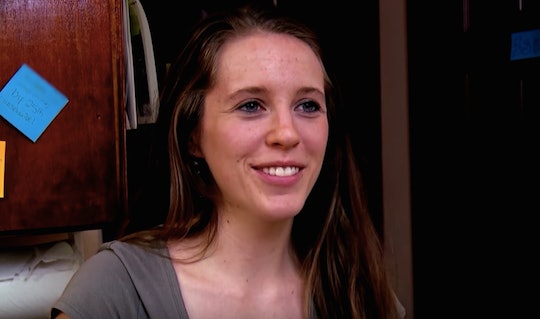 ‘Counting On’ Fans Think Jill Duggar Is Pregnant, Thanks To This Major Instagram "Clue"

As fans await the news that Joy-Anna Forsyth has given birth to her first child (her due date is Thursday), a new rumor is gaining steam in the Counting On universe. Apparently, some fans think Jill Duggar dropped a major clue that she's pregnant with her third child. The speculation kicked off on Wednesday after Jill captioned a seemingly innocent family snap with a curious hashtag. So, what's going on with Jill? Instagram sleuthing 101 is now in session.

You don't have to follow the Duggar family closely to know that they often have baby news to share. I mean, the family did star on a show called 19 Kids & Counting, after all. And as of now, three Duggars are pregnant: Kendra Duggar, Jinger Duggar, and Joy-Anna. That's a lot of pregnancies for one family, to say the least, and if history is any teacher, a few more names will likely be added to that roster in 2018.

But who will announce another pregnancy this year?

Right now, fans think Jill has some exciting baby news to deliver. The theory hinges on a photo Jill shared to Instagram on Wednesday featuring her youngest son, 7-month-old Samuel Dillard. In the pic, Jill cradles Samuel in her arms as she flashes a wide smile for the camera. "Love my #babies #samuelscottdillard," Jill captioned the shot, according to Instagram.

Although many of you might be wondering where this supposed pregnancy hint is, it's clear as day to Counting On detectives. Some eagled-eyed fans, who should probably consider a career in a field that requires extreme attention to detail, noticed that Jill used the plural hashtag of "babies." And considering Jill's firstborn, Israel Dillard, is not in the pic, people suspect the other baby in question is a pregnancy.

“'Babies' where’s the other baby, something you gotta say Jill?" one fan asked. Another person inquired: "Babies as in the one in your belly as well?" "She said my babies... she’s only holding one so she’s probably pregnant with one also," someone else added.

Of course, it's completely possible that Jill used the #babies hashtag so she wouldn't exclude Israel, which is something I bet a lot of parents can relate to. Most parents go out of their way to make sure their firstborn feels included following the birth of a sibling, so I wouldn't be surprised if this was Jill's thought process behind "babies." Or, maybe it was just a simple typo. The list of possible explanations here is lengthy.

But before you consider this theory kaput, it's worth pointing out the other reason people think Jill is pregnant.

If these comments about Jill's supposed "bump" makes you uncomfortable, you're not alone. Many people think it's unfair that a few people are directing the topic of conversation away from the hashtag to Jill's body. Not only are some fans pointing out that it's never appropriate to ask a person if they're pregnant, but others are bringing up good points about postpartum bodies.

As it has been pointed out many times before, all postpartum bodies look different and it's quite common for parents to sport a bump long after they give birth. And in Jill's case, she gave birth to Samuel just seven months ago, in July 2017. One mom drew attention to this fact, arguing:

As a mom of 2, baby bumps stick around for awhile so be careful with assumptions. It can be hurtful and discouraging when someone thinks you look pregnant when you’re not.

Another person stated that it's "rude" to assume a pregnancy without confirmation:

To those who think she's pregnant first of all she doesn't really go far in a pregnancy without announcing it, second it's just plain rude to even say she's pregnant or looks pregnant without knowing the truth and third it looks like she is sitting down and it might be in a particular angle where she might look like she's expecting.

My favorite response, however, might be from this commenter who admitted that they "learned" not to make assumptions about another person's body:

excuse me but assuming someone's pregnant and even asking is rude. I've learned that and obviously I'm not the only one who believes that's rude to assume. What if Jill has some baby weight yet to lose and you just said " definitely preggo"? You don't think that would offend anyone?

I point the aforementioned comment out because I assume some of these curious fans didn't mean any harm by their comments. There are a lot of people who don't know why it's inappropriate to ask someone if they're pregnant (even if it does seem like an obvious thing), and it's great to see this commenter approaching this issue with honesty and greater self-awareness.

As for whether Jill is actually pregnant, that remains to be seen. I'm confident, however, that Jill will share the news with fans ASAP if the speculation turns out to be true.