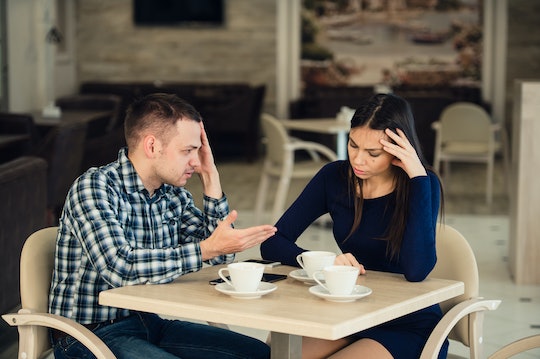 Couples Who Argue Stay Together, Study Says — But Here's The Catch

I have good news for couples, just in time for Valentine's Day. A day known around the globe to cause hurt feelings, arguments, and copious consumption of chocolate as lovers everywhere try to figure out what exactly they're expected to "do" to celebrate Feb. 14. So here is the good news, guys; new research found that couples who argue stay together. There's a catch though, so tread carefully.

According to Joseph Grenny, co-author of the New York Times bestselling book Crucial Conversations, arguing is a healthy part of a long-term relationship. In fact, couples who argue tend to be about 10 times more likely to stay together than those who never argue, which means I should be with my partner for about 10 years after we're both dead, I guess. But it's the quality of the arguments that is really the important part of the equation here. And arguing well is not as easy as some might assume it would be. A survey of 1,000 adults conducted by Grenny found that four out of five respondents cited poor communication as one of the main reasons for a failed previous relationship, but less than one in five considered themselves to be at fault in the breakdown of communication.

So how does one avoid arguing in a way that could be construed as combative or difficult? One pivotal step is to take responsibility for your own feelings, as Grenny explained to The Guardian:

The biggest unconscious mistake couples make is failing to take emotional responsibility for their feelings. We think others are ‘making’ us feel the way we are – and fail to see our role in our own emotions. That’s why when we discuss our concerns with our loved one we are so often filled with blame and provoke defensiveness.

He also noted that there are three topics that tend to be the most difficult for couples to discuss; sex, finances, and irritating habits.

If you need to discuss these painful topics with your partner, Greeny said honesty is the best policy, as he noted in The Guardian:

The success of a relationship is determined by the way in which sensitive issues are debated. True love takes work. Real intimacy is not just about love but is also about truth. And crucial conversations are the vehicle for surfacing truth in a way that accelerates a feeling of intimacy, trust and connection.

Sometimes couples tend to think it might be easier to just sweep the issues under the rug to avoid an argument, but Greeny told Goodyfeed that this isn't any better than arguing ineffectually:

The biggest mistake that couples make is avoidance. We feel something but say nothing. At least until we can’t stand it anymore. So we wait until we are certain to discuss it poorly before we bring it up.

In other words, give it a rest with the silent treatment — it's not helping.

Rather than use avoidance or poor arguing skills, Greeny offered these suggestions to properly resolve conflict with your partner, according to Sources of Insight:

Relationships tend to be difficult enough without allowing unresolved issues to color them. Nobody needs an undercurrent of hurt feelings casting a pall over their household, and it's obviously imperative to let those feelings out. Wisely, thoughtfully, and calmly; this appears to be the key to a happy, long-lasting partnership.

So by all means, keep on arguing. Just do it well, I suppose.

More Like This
Nebraska Judge Rules Two Mothers Cannot Appear On Their Sons' Birth Certificates
How To Support A NICU Parent, From Moms Who’ve Been There
Snooki Hints That A Sunday Dinner With All The Jersey Shore Kids Is In The Works
The Addams Family Is Not Exactly As Kid-Friendly As You Remember