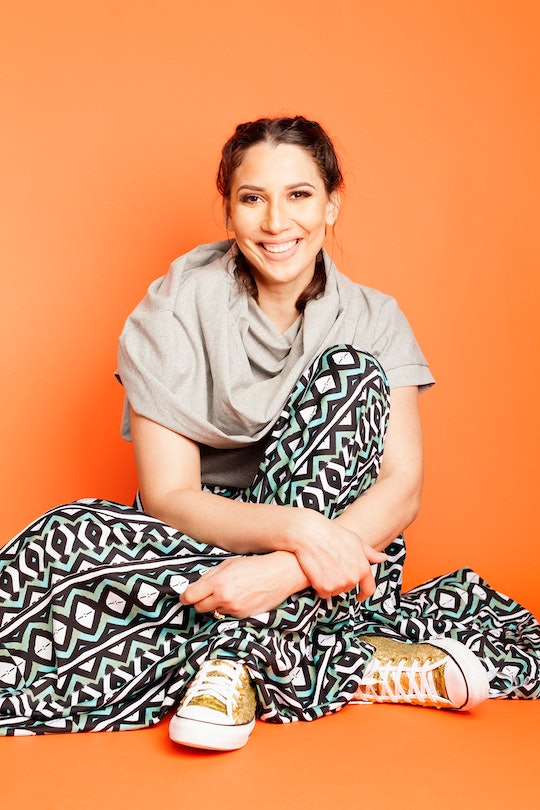 If you are a mother, there will come a time when you are certain you are permanently screwing up your child: You'll second guess the smallest decisions and assume that the textile of your familial life will come unhemmed without immediate intervention. You will push aside your own desires, believing you can't have both. YouTuber Rebekah Borucki knows the feeling, describing it thus: "Mom guilt is taking over, making you feel like you should be home, and not pursuing your dreams." These feelings of inadequacy loom large over motherhood, and have an outsized impact on our happiness. But Borucki says she knows how to get rid of the mom guilt.

As an influencer, television host, author, and activist, Borucki has long been used to being in the public eye and dealing with the scrutiny that comes with (you might know her fitness and yoga content from the early days of YouTube, or her vast, private Facebook group, The Blissed Inn — she is also a certified doula and rescuer of barn animals). But as a mom of five who has gone through a divorce and reconciled her relationship with an estranged teen son, she has gained a deep familiarity with her inner critic.

"There may always be a voice inside you that from time to time tells you that you're not doing enough," she tells Romper. (Disclosure: I know Borucki personally.) "Let's face it: your inner voice can be a real a**hole sometimes," she says. And it's universal: A 2017 study of 2,000 parents by Farm Rich found that they feel at least 23 different "pangs of guilt" per week about decisions they've made regarding their children. (Seems low, right? I have at least 103.)

It's like an internal micro-aggression chipping away at you slowly. Barely noticeable, but harmful.

That nagging self-doubt is what Borucki set out to address in her latest book, Managing the Motherload, out August 13 from Hay House Inc. Like shame researcher Brené Brown, Borucki believes that our fallibility and vulnerability — the pieces of our identity that can make us feel unworthy — are what make us human. Borucki says that by understanding our negative thought loops, she thinks we can access "a clear understanding of our discomfort. Negative thought loops become background noise that cause irritation without us even being aware of them. So we're irritated, but don't necessarily know why."

And it wears on you over time. "It's like an internal micro-aggression chipping away at you slowly. Barely noticeable, but harmful," she says.

This is how her 5-step guilt-busting system works:

Externalize your negative thoughts. Phase one, "The Fertile Ground," delves into your baggage. Borucki encourages readers to give a name to their negative inner voice (hers is "Becky," as in "with the good hair"), and start talking back to that inner naysayer. Give her the facts, not your emotions! she says. This directive has readers journaling negative emotions to take the power away from the feelings — she lifts the weight by casting them onto paper. It sounds counterintuitive to ink all those damaging thoughts, but it is cathartic, and you do feel lighter.

Observe the ways you respond to your home space. In phase two, "A Seed Is Planted," Borucki speaks openly about being a child of poverty, and how the chaos that marked her youth became a trigger as an adult, both in her mind and in her space. In a KonMari-adjacent approach, she suggests that readers prepare their spaces in a way that centers health over "things." She's not asking you to touch everything and find out if it resonates deeply enough to keep for life, she just wants you to be able to move through the space comfortably.

The same thing goes for the spaces of your mind. In this phase, your journaling is different; you tell the story of your own life, detailing the origin stories of your current triggers in order to sort through how they're affecting your mental and physical space today.

In our race to achieve, we can take on more tasks than we can complete. Instead, she says, if it's at all possible, you should find someone — a partner, a parent, a friend — who can help ease the burden.

State your goals out loud. Phase three, "Cracking Open," is perhaps my favorite. In it, she guides readers to do what she calls "goal digging." This means writing out goals, big and small, and telling someone about them. It could be writing a book, or coaching Little League. Whatever it is, you will be seeking out the people who can help you make it happen.

In this section, Borucki talks a lot about surrender. She says that in our race to achieve, we can take on more tasks than we can complete. Instead, she says, if it's at all possible, you should find someone — a partner, a parent, a friend — who can help ease the burden. Maybe you go on Groupon and find a house cleaner. Maybe you send out your laundry, or have your husband make the doctor's appointments. This phase is all about knowing what you want, and understanding the obstacles in the way of hitting those goals.

Reframe your recurring thoughts. Phase four, "Nurture and Grow," goes through a period of reflecting on how the traits of those who raised you might be manifesting in your own personality, and how you can reconcile that with your own vision of yourself. You will do this by creating your own affirmations of self-love, whether they apply to your personality or aspects of your life. For instance, if you're feeling like your house is less-than, you reframe that emotion by saying "My white walls might be in need of repair and they keep me safe and warm." The reframing of current situations helps you to stop focusing on the negative.

Reflect on your growth. In phase five, "Bloom, Baby Bloom," you celebrate your victory, reinforcing the idea that you are capable of profound growth. Borucki tells Romper that the earthbound, growing metaphor was a deliberate choice. Saying that she drew the idea "from my mother's garden, mostly, and how I'm drawn to nature and gardening." But, she offers a caveat, "I have a black thumb. I guess it's my way of connecting with its wisdom without my hands being in the dirt." A recurring theme in the book is her often fraught relationship with her own mother, though she views much of her wisdom as originating in the lessons of that relationship.

We are so often over-scheduled to the point of exhaustion, and, as mothers, see no other way of being.

I can tell you that I felt personally attacked when she described a friend who showed her a color-coded, completely full, spreadsheet of her schedule. (How did she know?) We are so often over-scheduled to the point of exhaustion, and, as mothers, see no other way of being. We don't delegate, we don't delete. Borucki suggests we do both, if at all possible. If it's not possible, as it wasn't for her in the early years after her divorce from her first husband, she has strategies for that season of your life as well.

Managing the Motherload gives moms the tools to move confidently through the straits and narrows of a season in their lives when they feel the deepest need for guidance, but struggle the hardest to find it. A recent survey completed by researchers for Birchbox found that 45 percent of parents responded that they have no time for self care, and 39 percent of them said that they feel guilty when they do carve out time for themselves.

This wasn't the book Borucki had originally intended to write. After an initial rejection of her second book proposal, her publisher noticed a blip on the proposal about an online program that she was hosting called "Managing the Motherload," and asked her to write a parenting book. There was a problem with that: at the time Borucki was estranged from her 17-year-old son, and suffering a miscarriage. Borucki tells Romper that "I didn't feel qualified, and I felt that writing a book about parenting would be fraudulent, so I wrote a book about motherhood, instead."

Borucki had an acute understanding of how you can survive and thrive as a person, and as a mother, regardless of your perceived personal failings. Which is how we got to the motherload.

Whether you follow all five phases or just hit the bullet points, you will likely find Borucki's book useful and poignant.

Managing the Motherload: A Guide to Creating More Ease, Space, and Grace in Motherhood
Amazon
More Like This
Good Moms Have Abortions — I’m One Of Them
These Stepmother's Day Instagram Captions Are Straight From The Heart
Stepmom Quotes & Sayings For Every Occasion
Celebrating Your First Mother's Day? These Quotes Say It All