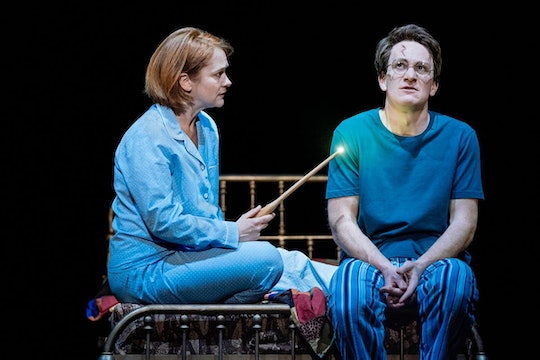 I have complicated feelings about Harry Potter and the Cursed Child, which continues to swallow punters whole for five hours at a time in theaters in New York and in London. On the one hand, the script reads like a fanfic I could’ve written when I was 13 years old but would’ve been too embarrassed to show anybody. On the other hand, the live performance is ASTOUNDING, which is a word I can’t remember ever having said out loud before. Still, there can be no other word for it. The acting. The special effects. All of it. ASTOUNDING. If you are unfamiliar, Cursed Child follows Harry Potter and his son through the trials and tribulations of parenthood and adolescence respectively, 19 years on from where Deathly Hallows left off.

I like to pretend I’m edgy and indifferent to things just as much as the next broke, joy-starved millennial who will never be able to retire, but let me tell you this: I was sitting in that balcony and I was clapping enthusiastically like a frequent flyer named Nancy whose plane had just successfully landed in Cleveland. I was having a good time — nay, a GREAT time. I laughed. I gasped. I leaned forward, squinting hard, trying to make out just how they were pulling off some of those special effects. I teared up not just once, but TWICE. Truly astounding.

Now, I know a lot of people have their issues with Cursed Child. I’ve had issues with it, too. My biggest issue, however, is not the fact that the play is ridiculous. Which it is! I’m not going to sit here and pretend that it’s not! But truthfully — secretly — I like ridiculous things. I delight in them. I love terrible movies, I live for books that make zero sense, and I am never having a better time than when I am watching something stupid on TV. So the fact that the plot of Cursed Child is absolutely bonkers didn’t bother me as much as it bothered other people. (Calling it the eighth story was going a bit far, I always thought. For me, it was more akin to a spin-off, a parody. A Very Potter Musical with higher production value.)

So the problem I had with the play wasn’t the ridiculous plot line. No, my problem was with the characterization of Harry.

I know I am but a humble fan, and it’s a bit presumptuous of me to assume I know Harry better than the person who created him. But I’ve spent the last 20 years reading these books over and over again, and while I was reading the script for Cursed Child, I couldn’t shake the feeling that this wasn’t the Harry I had come to know and love.

Much of the plot hinges on Harry’s tumultuous relationship with his son, Albus — a relationship that culminates in Harry saying, “Sometimes I wish you weren’t my son!” And I knew, in my heart of hearts, that Harry would never say that. He just wouldn’t. See, I could overlook many things about Cursed Child, like the fact (spoiler alert!) Cedric becomes a Death Eater, that the trolley witch is actually a trickster goddess(???), that the story has more holes in it than Swiss cheese. But what I could not overlook was the fact that Harry — a boy who grew up feeling unloved and unwanted — would look his son in the eye and make him feel the same way.

I felt very strongly about this right up until I actually saw the play. And then I had a totally different perspective.

Harry didn’t have anyone to teach him how to parent. He even says it towards the end of the play.

One of the biggest lies about adulthood is that we as adults know what we’re doing — that we’re older, wiser, more prepared to face life’s challenges. The truth is that none of us have a clue. We’re all just winging it. The only difference is that we’ve had more time to practice, to pretend we’ve got this crazy thing called life well in hand.

A few years ago, my little brother asked me how I got so good at parallel parking as he watched me squeeze the car into a tight space with precious little room to maneuver. The reason, of course, is that I’m older than he is; I’ve spent ample time making distressed noises behind the wheel while repeatedly hitting the curb as cars started lining up behind me.

My point in sharing this is that parallel parking is sort of like parenting. Both involve exasperation, bad jokes at stressful junctures, lots of panicked shouting. People expect you to know how to do it simply because you’re an adult, and you do it despite not knowing how because there’s no other way. The only difference is this: I had someone to teach me how to parallel park. Harry didn’t have anyone to teach him how to parent. He even says it towards the end of the play: “I didn't have a father, so I don't know how to be one.” People take parenting cues from their own parents, and Harry had no one besides the abusive and abrasive Dursleys to take cues from until he was 11 years old. Later on he had Sirius, Dumbledore, Lupin, Hagrid, and Mrs. Weasley… and while they all cared for him deeply, they were also very flawed and — perhaps most importantly — inconsistent.

Well, so what? I thought as I read the script, flipping pages and scoffing a little. Harry had two other kids, and he parented them just fine. However, James and Lily were easy for Harry to understand. Albus presented a challenge that Harry — with his fragmented history of parental figures — wasn’t emotionally equipped to handle. It was absolutely heartbreaking to watch Harry (played by Jamie Parker) try so, so hard to connect with Albus (played by Sam Clemmett) only to have that desperation met with eye rolling and hostility. Anyone who has ever been a difficult kid, or has been the parent of a difficult kid, will recognize this dynamic. The nervous jokes. The honest attempt at a heart-to-heart. The frustration that eventually gives way to anger.

Throughout the play, what Albus needs most is someone who understands him. It’s why he finds solace in an unlikely friendship with Scorpius Malfoy, a fellow outcast and the son of Harry’s childhood rival Draco. It’s also why he pushes Harry away. Neither Harry nor Albus possesses the experiential framework necessary to understand the other’s pain. When Albus looks at his father’s past, he sees a golden era of friends and popularity and world-saving heroics. When Harry looks at his past, he sees tragedy, suffering, victories that ring hollow because of everything he lost in the process. This adds yet another upsetting layer to Harry’s character — he’s attempting to be the parent Albus needs while simultaneously coping with his own trauma, a trauma that (as emphasized in Cursed Child) never truly went away.

It’s easy enough to say “Be the parent you never had growing up,” but the reality is so much harder. We’re not destined to make our parents’ mistakes, and victims of abuse don’t always pass that abuse onto their children despite a popular belief that this is not only likely but inevitable. However, breaking the cycle takes work.

I went from disagreeing with Cursed Child’s assessment of Harry to thinking Cursed Child gave us possibly one of the most realistic dysfunctional parent-child relationships I’ve ever seen.

On her website The Stress Reduction Spot, trauma counselor Christine Langley-Obaugh says, “We repeat what we don’t repair.” And so Harry, in a fit of furious desperation, lashes out the only way he knows how. He says, “Sometimes I wish you weren’t my son.” Not because he wants Albus gone, not because he loves James and Lily more, but because he has come to one of the most heartbreaking realizations in all of parenting — that your child is different from you, is suffering a pain you never had to experience, and is, in many ways, navigating this maze called life alone.

Is what Harry says to Albus excusable? No. But can we understand where he’s coming from, why he blurts it out at the peak of his frustration before he can stop himself? Sure. Every parent — even a parent whose past lacks skeletons — is going to make mistakes. My parents were great and my childhood was largely without upheaval (I never had to fight a Basilisk or walk calmly into death’s waiting arms, for instance), but I’m not going to say I escaped without a few scars. None of us do.

In short, I went from disagreeing with Cursed Child’s assessment of Harry to thinking Cursed Child gave us possibly one of the most realistic dysfunctional parent-child relationships I’ve ever seen in fiction. The story may be fanciful, a tale of magic and potions and monsters, but the parent-child dynamic is timeless. And not only does Cursed Child present us with an all-too-relatable problem, they also present us with a solution: search for that common ground. It’s there. Accept that you’re going to make mistakes. There’s no such thing as the perfect parent. “Perfection is beyond the reach of humankind, beyond the reach of magic,” as Dumbledore’s portrait explains to Harry.