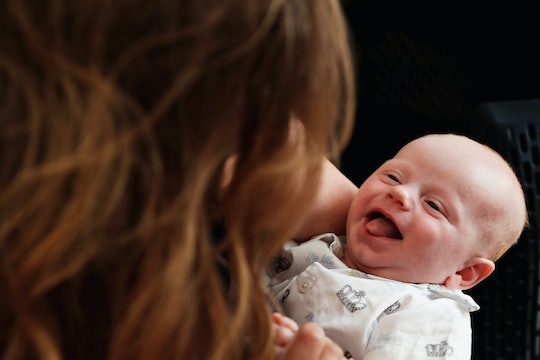 Every New Mom Has To Make Her First Big Mistake

It came as no surprise to me that I was an overly cautious new mom— a) I’m a perfectionist by nature, b) I had had a long journey with infertility and suddenly this tiny thing I cried, pleaded, bled, and went broke for was finally here, and good lord I better not break her, and c) I did a ton of research when pregnant, so I was well aware of others’ parenting mistakes and was determined not to do them myself.

I had a few new mom moments in the beginning, like the night she cried inconsolably all evening before I realized it was gas and tried some drops. She calmed after that, but I felt terrible. There was also the time I was convinced I couldn’t manage my baby, and her stroller, diaper bag, carrier and kitchen sink on the trip to the department store.

But my first real time I screwed up as a mom was when my daughter was about 4 months old. She had started rolling, but due to the comfort of breastfeeding in bed, I found it easier to lay with her on the outside of the bed. I wasn’t one to bed-share exclusively, but I would bring her into bed with me in the early mornings, so I could keep sleeping. That morning, I took her into bed and fell asleep while she was nursing. I woke to a thump and when I opened my eyes, she was gone. And then she was crying way below me on the floor. I stared at her from the top of my tall bed we had gotten recently. You know, the one we bought so we could have more room if the baby was sleeping with us. It took me .045 seconds to leap up and snatch her, howling at the top of her lungs, still swaddled up in her sleep sack. I felt like the world’s shittiest mom for falling asleep knowing how much she rolled.

“It’s OK, shhhh, it’s OK,” I cooed, probably more to myself than her. Her screams were deafening in my ear as I checked her head and body for injuries, wiping tears from my own eyes.

As I answered the nurse’s questions, I hoped she would reassure me with an 'Oh honey, this happens to every parent. Don’t beat yourself up.' But she didn’t.

It was 6:30 in the morning, but I decided to call the nurse line because I wasn’t sure if she had hit her head on my end table on the way down. As I answered the nurse’s questions, I hoped she would reassure me with an “Oh honey, this happens to every parent. Don’t beat yourself up.” But she didn’t. Instead she asked me about her level of consciousness, any markings on her body. She warned me about lethargy and how I should probably take her in if I wasn’t sure she hit her head. It was awful.

By the time I hung up, my daughter was laying on the bed kicking her legs and cooing. I was a wreck. I texted my friend, “I suck at parenting.” I could feel her laugh through the phone. “My kid’s fallen off our bed probably six times now. Take her to her chiropractor. She’ll be OK. Kids bounce.”

It was the first time the fairytale of new motherhood was broken for me.

And she ended up being just fine. But it shook me because a) I wasn’t careful enough, b) I may have well broke the baby, after trying to hard to bring her into the world, and c) everything in my pregnancy research said not to sleep with her so close to the edge of the bed and I had friends who I was trying to learn from not to do things like that.

So not only was I overreacting, but I learned I’m kind of dramatic too.

But it was the first time the fairytale of new motherhood was broken for me and I could see it for what it really was: my new reality. Not a fairy tale of cuddling a newborn all day and breathing in her scent, but of trial and error and hoping you don’t mess them up too bad before they fly the coop. It was full of pooping and crying and feeling overwhelmed on a daily basis. And the baby was difficult too. I think that moment I heard the thump was the moment that helped me let go of that perfectionism. Hey, she fell off the bed, so I broke the curse of never wanting to screw up.

Of course, I realize there are many ways to be a horrible parent to your kid. Just take a look at the news. But I know I needed to make that mistake so I could forgive myself for not being that attentive, meticulous parent I had envisioned myself to be. The truth is, every day I silently ask my daughter for forgiveness: for losing my temper too much, for leaving her in a wet diaper until lunch because I just plain forgot, for being distracted and hearing the crash in the living room.

That morning in the semi-darkness of my bedroom I learned that even though I felt terrible for letting her fall, I received this gift of permission to fall short. That’s how it is when you’re parenting. And that’s immensely freeing.

More Like This
The Best Travel Tips For Solo Parenting
When Does A Baby Recognize Their Father? A Pediatrician Explains
Paris Hilton Is Officially A First-Time Mom
Valentine’s Day Photoshoot Ideas For Your Little Cupid
What Parents Are Talking About — Delivered Straight To Your Inbox