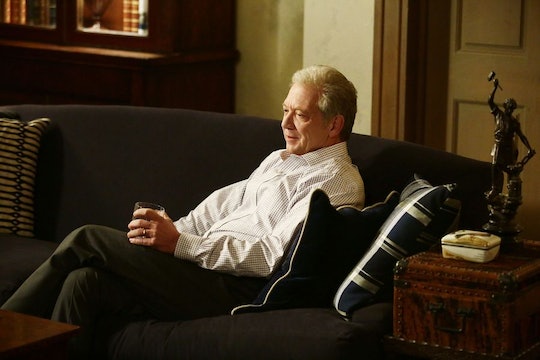 Cyrus Is Fired On 'Scandal', But It Probably Won't Be The Last Time We See Him

This season on Scandal, Cyrus has been up to some pretty smarmy things – which is not necessarily new. Since the mid-season premiere, Cyrus has been working with Governor Vargas to make him a presidential candidate. Not only that, Cyrus created a hostage scenario to make Vargas appear to be a hero and lied about his paralyzed brother (note: he doesn't have a brother). Considering this, it wasn't too surprising when Cyrus was fired on Scandal because of this – but, of course, it would not be the first time he was ousted from the White House.

Cyrus was caught doing other immoral acts previously in the series. Working with the Secret Service agent that murdered President Grant's son — Tom Larsen — and marrying a male prostitute to save face are just two examples. This is also not the first time Cyrus has been fired from his position. He was also let go in the Season 4 finale, when Fitz learned he was aligned with Larsen.

Midway through Season 5, however, Cyrus was back in his same position and he had apparently not learned his lesson. He worked with Larsen again to create the fake-turned-real hostage situation, which resulted in Vargas being shot. Cyrus continued the lies, and to prove a point to Vargas, made up a story about his "brother" Oliver, who turned out to be completely fabricated.

On Thursday's episode, Abby put the pieces together that Cyrus was working with Vargas, and probably running his campaign. She used it to her advantage to get ahead in the White House, because that was what Cyrus himself would do in the situation. Abby told Fitz what she knew in order to stage a coup in the White House and become Chief of Staff – and it worked. Fitz fired Cyrus, but it was actually Abby who broke the news to him.

Jeff Perry, who portrays Cyrus, was asked at PaleyFest what his character will do now that he's been fired from the White House. Perry said, "You never know with Cyrus… There’s a way in which I think Cyrus is getting bit of what he wants." Perry continued, "He needs to move on. There’s a way in which the mercenary Cyrus is looking for what’s my next roost."

Seeing as Cyrus has been fired before and returned, it will not be surprising if history repeats itself. His relationship with Fitz goes back years, and seeing as he could not be elected again, perhaps the President will look the other way. Regardless, given Cyrus' personality and work ethic, it's certain that he will return — if not to working in the White House, at least in its vicinity.