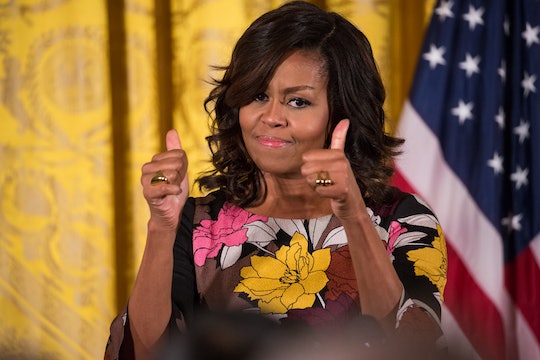 Dad & Daughter’s Song About Black Joy Is Such A Hit, Even Michelle Obama Shared It

Music has the power to heal, to transform, to teach, and to connect others to each other. And in the case of one dad and his 5-year-old daughter's viral song called "I Love My Black So Much," their musical creation connected them to Michelle Obama.

Last week, the former First Lady shared a video proud dad Daniel Johnson had posted on his Instagram page of him and his daughter Dakota singing a powerful and sweet song they co-wrote about Black joy. "I just love this!" Obama tweeted. "Kody and Daniel are so right: We are strong. #BlackJoy."

Johnson of Queens, New York tells Romper that he was "humbled and honored" that Obama shared their song. And as for little Dakota, she was apparently pretty "excited as well."

Johnson — a self-described "girl dad" of two, as he told TODAY — says that he's been singing with his daughters for years and he tells Romper the inspiration behind "I Love My Black So Much" came directly from them. "What inspired me to write the song was just admiring my daughters' beauty," Johnson says. And when he asked his older daughter Dakota what she liked about being Black, her father says she just kept telling him "I love my Black so much." At which point a song was born, written by a dad and daughter duo.

Johnson tells Romper that melodies have been connecting him to his little girl since he was singing her ABCs with her. According to Johnson, his daughter struggled with speech delays throughout her toddler years and by the time Dakota was 3 or 4 years old "her words were coming out as infant talk." But Dakota "always could sing melodies," Johnson tells Romper.

"So I used that as her advantage," he says. "Music helped her express herself to me and my wife... Melodies saved her early stages in life." Since those early days, Dakota has continued to sing with her dad. Beyond "I Love My Black So Much," Johnson has shared videos of him and his daughter rehearsing songs together and performing another lovely and uplifting ditty called "My Black Is Beautiful."

Since sharing it on June 12, Johnson's video has gotten over 19,000 views on his Instagram and over 583,000 views from Obama's share on Twitter. "I Love My Black So Much" is a sweet reminder of how simple messages resonate with the world. Especially when they're sung by kids. And especially when they get an amazing shout out from Michelle Obama.