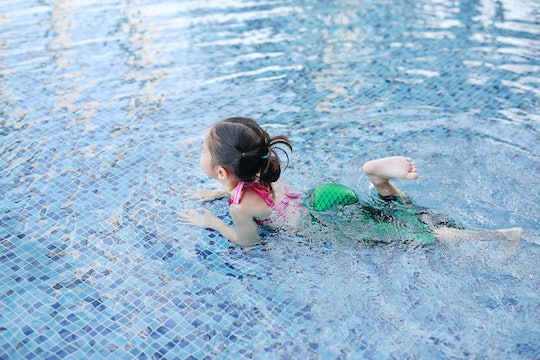 This Dad's Cautionary Tale About Daughter's Mermaid Swimsuit Is Terrifying

It is unbelievable how quickly kids can find themselves in danger. One minute everything is fine and the next... it's difficult to even think about. This dad's warning about his daughter's near-drowning in a mermaid swimsuit is a terrible thing to hear, but his message could save children's lives.

Adam Lisberg is a father of three living in New Jersey. As he wrote in a Twitter thread, he and his wife decided to buy an inflatable pool to put in the driveway "for our isolated summer." The pool was just two feet deep, but certainly deep enough for his 5-year-old and 7-year-old daughters, Annabelle and Ruby, to enjoy on a hot summer day. He went on to note that they also bought their daughters' matching two-piece mermaid suits to wear while they swam. The suits came complete with matching tails and of course, they're totally adorable. But as Lisberg discovered, they're also a hazard:

"Sunday afternoon, the mermaids were in the pool. I was in the kitchen overlooking the pool, window open so I could hear them, looking at them every minute or two. Then Ruby came inside and told me calmly that Annabelle was underwater, and wasn’t moving, so she pulled her out."

The distraught dad went on to share that he ran outside to find Annabelle "lying exactly like a TV mermaid washed up on the shore. But when I picked her up, her eyes were wide open and she didn’t react."

He called 911; his wife arrived. Fortunately Annabelle started to cry but was unable to speak. How did this happen?

Lisberg explained: "And here’s why I’m telling this story: Ruby said Annabelle pulled that mermaid tail up to her shoulders and tucked her arms inside. And as Annabelle told us later, she tried to 'play potato' (?!?) by lying down in the water. But she couldn’t reach her hands out to get up."

Fortunately for Lisberg, Annabelle recovered after staying for two days in the ICU. While the family is still recovering from the shock of seeing their daughter nearly drown, Lisberg wanted to share his story "as a warning about kids, pools, and swimsuits."

The reality is that children drown in kiddie pools every year, as per the CDC. And for every child who dies from drowning, there are five more who end up hospitalized for "non-fatal submersion injuries."

Adam Lisberg was watching his daughters swim. He was careful. The pool was only two feet deep. Still, tragedy very nearly struck his family. It's a haunting reminder that life is a fragile thing, and that our children are the most fragile of all. And that water safety is incredibly important.