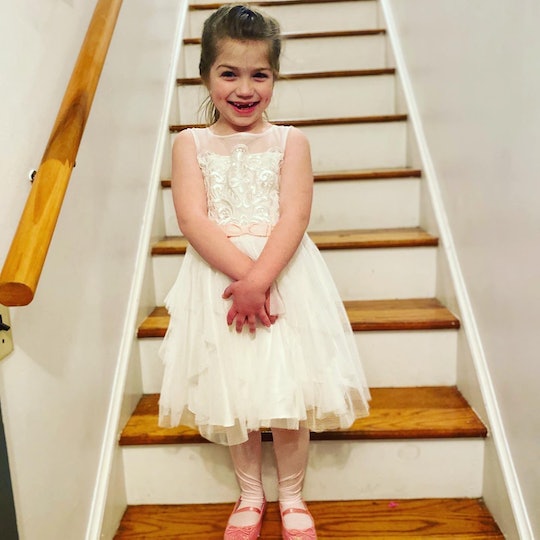 The day after my husband and daughter went to the Annual Sweetheart Dance, I met a friend for drinks. "I saw the pictures you posted last night," he said. "Now tell me what it is and why it's not creepy." It was a fair question. I can see why some people think daddy-daughter dances are gross, but I firmly believe that, at the end of the day, they're a net good for families... or at least they have the potential to be.

When it comes to this topic, any opinion you have is, as the kids say, A Hot Take. Because the people who love daddy-daughter dances looooove them and think you're sick and twisted if you can see it as anything other than an innocent bonding experience between a father and his little girl. The people who hate these events haaaaaaaate them, deriding them as a conventionally romantic paradigm and creepily applying it to dads and daughters and exclusionary to boot. I tend not to be terribly "middle of the road" on anything in my life — I'm someone who gleefully lives her life IN ALL CAPS. But, in this instance, I get both sides completely, even if I ultimately join the ranks of the "pros."

But I'll concede that two major things for the cons. The first being that I know from first-hand experience how difficult daddy-daughter events can be when you're a fatherless girl.

My dad died when I was a toddler. While my mom eventually remarried a wonderful man whom I call Dad, the years I didn't have a father were hard and made harder by "dad" holidays and events. They reminded me of what I didn't have. It's not an unusual scenario for a child not to have a father in the picture or able to take her to a dance. Death, estrangement, prison, challenging custody arrangements, or families with same-sex parents are de facto excluded from traditional daddy-daughter dances. I don't think anyone can look at that fact and say, in good faith, that it's not a reasonable concern.

The other concession? Even in the best scenario, any instance where you can say "My dad is my date" earns at least a little bit of side-eye, right? The pinnacle of feminist/progressive horror over daddy-daughter dances is epitomized in purity balls, where all the girls dress in white and pledge their virginity to their fathers in a ceremony very similar to a wedding ceremony, complete with putting a ring on their left ring-finger. Even skipping over the (very big and important) discussion about how so-called purity culture is damaging, particularly to women and girls, fathers walking their daughters down the aisle and faux-marrying them is 100% extremely creepy.

This is an extreme example of the genre. And while I do think certain aspects of the daddy-daughter dance can fall short of a purity ball and still be creepy, I also think there are ways to go about it that keep the "ick" factor to a bare minimum. My town's annual "Sweetheart Dance" is, I think, a great example.

First of all, it's not styled as a Daddy-Daughter dance — it's a Sweetheart Dance, sponsored by our local Girl Scout Council and open to everyone. Kids are encouraged to "bring your favorite sweetheart (18 years and older) for a fun-filled night of crafts, dancing, raffles, and refreshments." While most attendees interpret this as an event for fathers and daughters, the fact that it's not explicitly advertised as such is important. Words matter. Inclusive language like this acknowledges that families outside of the mom-dad-kid(s) model exist, and that they are not only valid but welcome.

My kid, apparently, is a Sweetheart Dance traditionalist: she wanted to bring her dad. "You already know all the Girl Scouts, mommy," she explained. "He's never met them."

These dances present an opportunity for dads to immerse themselves in something traditionally 'girly,' in public, with their daughters.

My husband willingly accepted her invitation and encouraged her excitement, but being an ardent feminist and general crank about social events, was a bit skeptical. While not vehemently against the concept, he tends to fall on the "these things are weird" side of the argument. Still, our daughter's raging enthusiasm (squealing "I'M GOING TO WEAR A PRETTY DRESS AND WE'RE GOING TO DANCE THE TANGO!" every single day for weeks) couldn't help but be contagious.

And that brings me to the biggest reason I support this idea: these dances present an opportunity for dads to immerse themselves in something traditionally "girly," in public, with their daughters.

Toxic masculinity has robbed many of these dudes of their ability to play Barbie or have a tea party in the privacy of their own homes, much less out in public in front of other men. (I know, I know #NotAllMen but enough men that it's a problem.) But going to a party and twirling around with a cadre of grade-schoolers in frilly dresses belting out "Let It Go," before segueing into a rousing rendition of "The Macarena" is not only a good bonding experience, but it's a bonding experience that speaks to their daughter's interests and says, "This frou-frou girly thing you like? I'm not above it, and it's cool that you like it. Let's enjoy it together."

"I still kinda don't get it," my husband texted me later. "But I imagine the girls like dressing up, going to a special party, and getting to feel a little grown up in a super safe environment... Oh wait. Not that complicated at all."