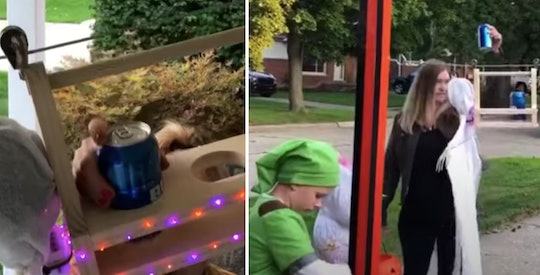 Parents like beer, kids like candy, and with Halloween just around the corner, amid an ongoing pandemic no less, one dad has made socially distanced trick-or-treating fun for everyone with a hilarious and clever invention.

Matt Thompson, a dad of three from Detroit, Michigan, was recently inspired to find a new way to hand out candy to little trick-or-treaters this year after seeing an Ohio dad's Halloween-themed candy chute go viral. "I liked the idea and I thought I could come up with something mechanical to try out in my neighborhood," Thompson tells Romper.

A woodworker by trade, Thompson specializes in unique designs with quirky touches, like an Adirondack chair with a back-scratching component or a chore wheel that always lands on "Have a glass of wine." But his Halloween invention clearly takes the cake.

Thompson designed a Halloween zip line in the form of a scary ghost that runs from his front porch to the end of his driveway, carrying not just candy for the kids but also a few Bud Lights for the parents. He says all he was really aiming for with his invention was "that people would get a kick out of it." After Thompson shared his video on YouTube as well as his Facebook business page, it's been viewed more than 1.6 million times. Mission accomplished.

The idea has really caught on with people who are worried about Halloween as COVID-19 remains a concern across the country. This week, the Centers for Disease Control and Prevention (CDC) advised families across the country to avoid traditional trick-or-treating this year because it's been described as "high risk" for spreading the virus.

Thompson's Halloween candy/ beer delivery zip line, however, is not exactly traditional trick-or-treating. One fan of the invention commented on Thompson's video that the addition of Halloween treats for adults really makes this zip line pop, "Bud Light for Halloween treats? Awesome!"

As for Thompson, he says he's planning on handing out candy on Halloween "after putting up some Xs to promote social distancing" because "the neighbors are expecting it." He admits he has gotten some negative feedback from people "who think I shouldn't be doing it at all, some who think it's overkill, and some who don't like the beer," but mostly people have been positive.

"The fact that people are sharing it, that's pretty exciting," he says. "It's nice to see it take off."