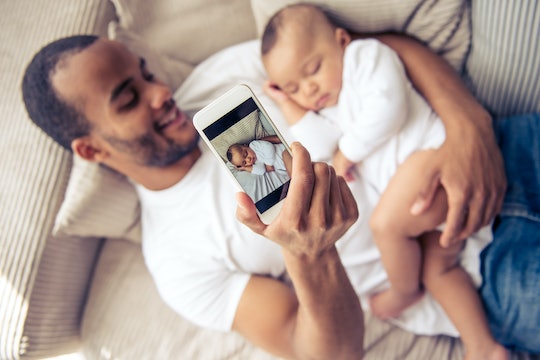 I wish I could remember what I thought parenting would look like before I had kids. If my memory serves me correctly, I thought it would be like babysitting my cousins when they were at their optimum cutest, around 3, with dressers full of cute clothing and nights full of sleeping... but that might not be right. That's the thing about becoming a parent, there's a very definite line between what you expect and reality. But that doesn't mean you shouldn't try to brace yourself for the change, right? As the world gets ready to celebrate Father's Day on June 16, let's have a look at how the dads of Reddit advised an expectant father on how to prepare for the Big Change, because there's nothing I don't love about their words.

There is something really beautiful about reaching out to a community of helpful folks when you find yourself at a crossroad in life. Whether that community is in line at the grocery store, your neighborhood, or online — the important part is reaching out. Which is exactly what a newly expectant father decided to do to fellow dads on Reddit recently.

Reddit user u/FlourishOutThere posted a question recently about his exciting/daunting new situation: "I found out yesterday that I (36/M) am going to be a Dad!!!!! For the first time!!! If you could tell you past self something at this moment what would it be???"

The responses were full of wisdom, honesty, and humor about how to be as supportive as possible to the expectant mother as the journey begins.

As Reddit user GlassBottleCokes noted, "...I would tell you to be excited and involved as much as you can! Prepare for your significant other to become a totally different level of hormonal and while you have plenty of time to prepare for the physical, your mental journey has only begun! It’s all for the better though!"

Pregnancy hormones are obviously difficult and it's a good idea for supportive dads to be ready to deal with some interesting situations. Like this dad on Reddit who wrote: "Tv certainly exaggerates most of it. That doesn’t change the fact that I upset my wife for 'standing up the wrong way' one night. We still laugh over that one."

Once the baby arrives, life becomes a whole different ball game. And these dads had some pretty solid advice about how to focus on what's really important about fatherhood.

Reddit user braindedned wrote, "You don't need all that bullsh*t. They need blankets to be swaddled in, a safe place to be set down in, diapers and bottles. All the other stuff is for you. Save your money for time off work instead."

I mean, not even royal dads get a break from the sleepless nights. When Prince Harry became a father to baby Archie in May his older brother Prince William, himself a father of three, welcomed him to the "sleep deprivation society" that is fatherhood, according to The Guardian.

If this new dad needs to take just one piece of advice away from these Reddit sages, let it be this advice about diaper changing. "When you put or change a diaper. Put a wipe or a diaper to cover genitals or the butt to prevent getting splashed by pee or poo," Reddit user willpowered advised. "My boy peed on my arm in the first 3 hours of being born and a few weeks later, while changing his diaper because he had farted/pooped. I thought he was done but he wasn't and ended up blowing up more poo and the splash was everywhere....even on the walls."

Sure, everyone's parenting journey looks a little different. But there's something innately comforting about knowing you're not alone in all that different, isn't there?