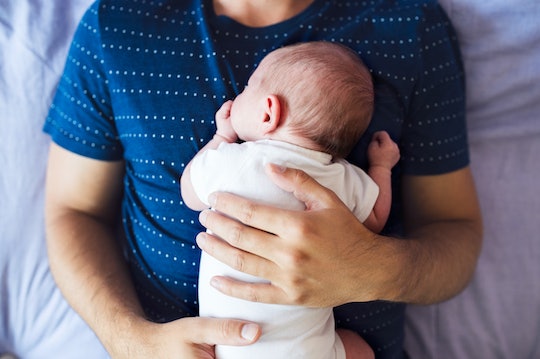 In a major win for parents in the workforce, investment bank and financial services company JPMorgan Chase settled a dad's parental leave suit for a whopping $5 million on Thursday, May 30, as The New York Times reported. The father, Derek Rotondo, initially filed the complaint when he was allegedly denied a full 16 weeks of paid parental leave, the same amount of time JPMorgan Chase allotted to mothers.

Rotondo, who has worked at JPMorgan Chase for seven years as a financial crimes investigator, asked for 16 weeks of paid parental leave when his son was born in June 2017, according to CBS News. But instead of granting his request, the company allegedly told Rotondo that "men, as biological fathers, were presumptively not the primary caregiver," and that he would instead receive two weeks' leave, according to Forbes.

"The company then said that if I wanted additional paid leave as a father, I would have to show that either my wife had returned to work — which is not possible in our case, as my wife is a special education teacher currently on summer break — or that the child’s mother was 'medically incapable of providing any care for the child,'" Rotondo wrote in a blog post for Moms Rising.

Rotondo ultimately filed a complaint with the Equal Employment Opportunity Commission, arguing that dads deserve the same amount of paid parental leave as mothers, according to the American Civil Liberties Union.

JP Morgan Chase did not immediately respond to Romper’s request for comment regarding Rotondo's lawsuit.

In response to Rotondo's complaint, the company offered him the full 16 weeks, therefore giving him the ability to act as the primary caregiver for his newborn child.

Despite the personal win, Rotondo's lawyer continued the case in an effort to secure equal paid leave rights for all parents in the company, driving home that a person's ability to act as the primary caregiver isn't dependent on sex.

“While sixteen weeks of parental leave is quite generous, and we wish more companies would follow Chase’s lead, caregiving leave must also be offered on an equal basis to men and women,” Galen Sherwin, senior staff attorney with the ACLU’s Women’s Rights Project, explained in a press release.

Sherwin added, “Unfortunately, the gender stereotype that raising children is a woman’s job is still prevalent, and is reflected in far too many corporate policies."

As a result of Rotondo's case, the American Civil Liberties Union, the ACLU of Ohio, and Outten & Golden LLP banded together to file a class a first-of-its-kind class action settlement on behalf of "male employees who allege they were unlawfully denied access to paid parental leave on the same terms as mothers from 2011 to 2017."

JPMorgan Chase settled the suit on Thursday, May 30, awarding a staggering $5 million to the plaintiffs, according to MarketWatch. Additionally, the company agreed to make sure that "both men and women can take the longer leave benefit offered to a baby’s primary caregiver," according to Vox.

“I love my children, and all I wanted was to spend time with them when they were born,” Rotondo said in response to the historic settlement, according to The Daily Beast. “I’m proud that since I filed my charge, Chase has clarified its policy to ensure that both male and female employees who wish to be the primary parental caregiver have equal access to those benefits.”

Of course, this settlement isn't simply about time and money. It's about recognizing that dads aren't just helpers or babysitters — they're co-parents, single dads, and active participants in their children's lives. A settlement like this one is about dismantling the stigma that dads exist to "help," an issue that's still perpetuated in the media and popular culture today.

Simply put, all parents deserve ample paid leave following the birth or their child, regardless of sex. Although this case is a big win for dads everywhere, the United States still has a long way to go in solving this frustrating problem.