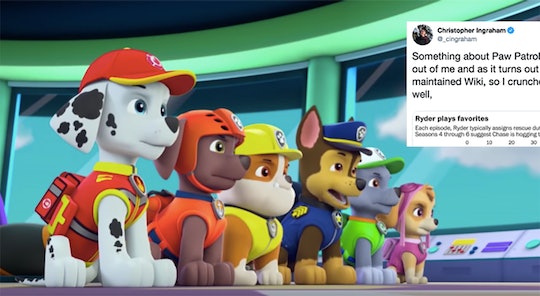 I think it's safe to say many parents out there have sat through countless hours of Paw Patrol, a popular show on Nick Jr., learning everything there is to know about Ryder and his heroic gang of pups. And it's not uncommon for parents to have questions about the cartoons they're forced to watch, as evidenced by this dad's Paw Patrol investigation into whether Ryder "plays favorites." The dad in question expertly created a bar graph to illustrate his findings, and all I'll say for now is parents feel so validated by his conclusion.

If you've never watched Paw Patrol before, here's a brief rundown for you: The show centers on this kid named Ryder who lives in a tower above a town called Adventure Bay and is in charge of emergency services for the area. Fortunately, he has a team of six dogs at his beck and call (Chase, Sky, Rocky, Rubble, Marshall, and Zuma), all of whom are available for any and all emergencies. Many of the emergencies revolve around rescuing the mayor's pet chicken, but I just can't get into that right now.

Now that you're caught up to speed, please direct your attention to this in-depth and incredible tweet from Christopher Ingraham, a data reporter for The Washington Post and a dad. After watching multiple episodes of Paw Patrol, Ingraham found one particular element of the show bothering him: Why does Chase get so many more assignments than the rest of the puppies? To answer this burning question, he decided to do what he does best — investigate using data. The end result? A glorious bar chat titled, "Ryder Plays Favorites".

Ingraham pulled his data from an "obsessively-maintained Wiki," stating on Twitter:

Something about Paw Patrol was bothering the heck out of me and as it turns out there's an obsessively-maintained Wiki, so I crunched some numbers and, well,

A quick look at the numbers shows that Chase, the hands-down star of the show, is given the most opportunities for heroism and glory with a full 61 deployments. The next most utilized puppy is Sky with 48, then Rocky with 39, Rubble with 26, Marshall with 25, and Zuma (a puppy who has an actual boat and is almost never even used for Sea Patrol, I feel it's only fair to mention) is in last place with a dismal 16 deployments. Ingraham suspected as much, as did many other social media users who have been paying close attention.

"Sky's high percentage of usage is misleading since Ryder usually just sends her as a scout despite being hands down the most skilled pup," one person wrote.

Ingraham went on to argue that Zuma, a water pup, isn't being used to his full potential.

"Ryder doesn't even bring him out on the goddamn Sea Patrol episodes, what is he thinking?" he wrote. "Gross mismanagement of the team's resources at the very least."

Several other parents and caregivers were quick to pile on with their own observations.

One noted that far too much time and energy is spent on the mayor's chicken, making me feel quite validated. "Too many resources are used to constantly save the mayor’s stupid chicken," the commenter aptly pointed out.

Another social media user was concerned over the gender imbalance on the program, not to mention the character of Everest who they described as "an independent contractor who is not part of Paw Patrol but goes on missions for them, Blackwater-style."

Also, what happens to the good people of Adventure Bay who need jobs now that the puppies have essentially cornered the market?

"Sometimes I think about the firefighters in Paw Patrol who must have lost their jobs when Adventure Bay privatized the department and gave it to a rich 10-year-old and his talking dogs," the commenter argued.

It isn't just Paw Patrol that has parents getting super involved in their kids' television watching experience. Shows like Caillou and Octonauts, to name a few examples, were also called out.

"I feel you pain," one person replied to the thread. "Last year I couldn't sleep until I figured out how much it would cost to fund the Octonauts."

There might be some people out there who think it's a bit odd to get obsessed over inequality in the workplace for cartoon puppies, but those people probably haven't had to sit through countless hours of Paw Patrol. C'est la vie.