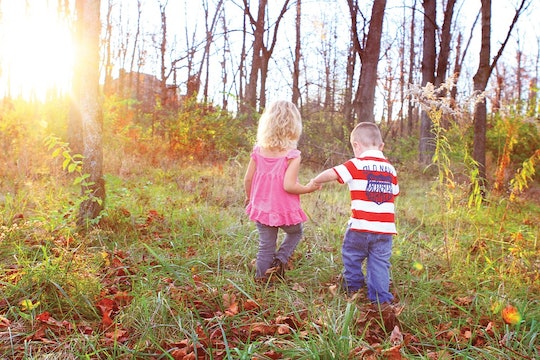 Children are fast. Crazy, frightening, other-worldly kind of fast. Which seems impossible given their stumpy little legs and diminutive size, but there it is. They are crafty, wily little suckers who know how to take advantage of their parents' momentary distraction and make a break for it, leaving their terrified parents desperately trying to wrangle them and keep them safe. And yet, we parents are never supposed to impede their flight by restraining them in any way, if the critics are to be believed. Well, one dad's viral post about kid leashes is turning that old stereotype on its head.

Clint Edwards, a blogger and father of three children, recently shared a post about putting his daughter on a leash at a farmer's market. Edwards admitted his daughter can be something of a "wild child" and wrote that he felt "no shame" about putting his daughter on a leash. For several reasons, of course: to keep her from running out into the road, getting lost, and to maintain a semblance of his own sanity. Which makes sense, right? To some people, sure, but not to everyone, apparently. Edwards wrote on his website, No Idea What I'm Doing, that he felt judged by strangers no matter what he did:

the real difficulty with having a wild child is that you are damned if you do, and dammed [sic] if you don’t.

The backlash over the use of child harnesses has been severe and constant. Back in 2012, when child harnesses seemed to enjoy a surge in popularity, a columnist for Parents magazine wrote an outraged opinion piece on the child harness. Judith Goldberg wrote:

Leashes are for dogs. You wouldn’t put your child in a crate, or let him poop on the sidewalk, right? If you have a bolter, invest in a cheap umbrella stroller with a buckle.

And yet. Parents are supposed to put the highest possible premium on their child's safety. As Edwards pointed out in his Facebook post:

Because the fact is, if I didn’t put Aspen on a leash while at amusement parks, the zoo, a crowded mall, or the farmers market, she’d be the lost child announced over the intercom. She’d be the kid popping up in every Facebook feed for wandering into a shopping center parking lot, unattended. She could be the child climbing into the tiger cage. Because I can't, for the life of me, keep her from moving. Her curiosity is incredible, and for only having a 12 inch stride, she moves faster than any Olympian.

While he might have gotten some odd looks from strangers, Edwards' post has since gone viral. People's comments have been overwhelmingly supportive.

I leashed all 4 of my kids, they are adults now, with no scars from being leashed. Although my brothers taught one of them to bark at people when he had it on, was the only bad thing. I still have this harness to be passed on to use on the grandkids.

Until those judgmental people have a runner or as you describe a child with a wild streak. They will never understand. Parents of truly spirited children just get it, no explanation needed.

Dirty looks or no dirty looks, you do you as a parent. If your kid is a runner, then by all means give yourself a break and employ the kid leash. Nobody knows your kid like you do. Period.

More Like This
Leonardo DiCaprio Nearly Had A Role In 'Hocus Pocus' & More Fun Facts You Didn't Know
Alec & Hilaria Baldwin Welcome Baby #7, And Revealed Her Cheerful Name
Rihanna's First Post Since Giving Birth Confirmed She's Performing At The Super Bowl
Gabrielle Union Admits She May Be Becoming A Bit Of A Dance Mom With 3-Year-Old Kaavia