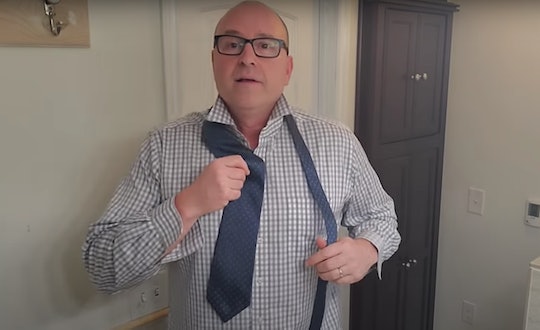 If you don't know how to tie a tie, check your oil, or iron a dress shirt, help is on the way. Wholesome, thoughtful, sweet help in the form of one dad's YouTube channel called Dad, how do I?. The now incredibly popular channel is full of tips and advice on how to figure out some skills you might've learned from your own father, but maybe didn't have the opportunity. Much like he'd been left to learn everyday tasks without a father to teach him when he was young.

Rob Kenney was just 14 years old when his father abandoned him and his siblings in Bellevue, Washington, as he recently told Shattered magazine. When his father left, Kenney went to live with one of his older brothers and went on to make a life for himself. He eventually married and became a father to two children of his own, both of whom are now adults.

After raising his own kids, he realized he might have some important tools to pass down to the younger generation. Information they might not get if they come from a broken family, have an absent parent, or never got the chance to learn certain skills from their own mothers and fathers. So he decided to create Dad, how do I? with his daughter to share some "practical 'Dadvice' for every day tasks" with he

So far, Kenney has shared instructional videos on how to tie a tie, how to unclog a bathroom drain, how to hang a shelf, and many more.

Kenney told Shattered magazine he's been surprised by how much people seemed to need help with these tasks, but the response so far has been touching. "I thought I was just going to be showing people how to do stuff, but it’s kind of resonating on a whole different level," he told the publication.

Since starting the YouTube channel just one month ago, Kenney now has over 800,000 subscribers, some of whom have shared how much they appreciate the videos. "This was more necessary than what I thought, thanks a lot," one viewer commented on Kenney's video teaching viewers how to shave their face. "This is such a great and thoughtful idea," one viewer commented on his very helpful video about how to change a tire. "My father wasn’t in my life either. This would have helped when I was younger: you're awesome."

Kenney has been so overwhelmed by the support he's received that he made a video to thank his subscribers and admitted that he's been an "emotional wreck" with all of the messages he's received. "The pain is pretty real in our world," he said, "and hopefully this will help alleviate some of it."

Of course, it isn't only dads who know how to tie ties and change tires, but for those who don't have these skills, it's pretty wonderful to be able to access them on this dad's YouTube channel.