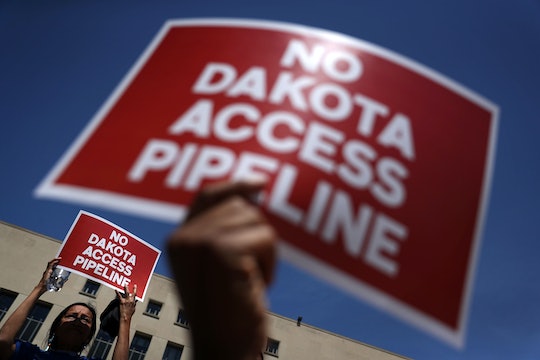 The Dakota Access Pipeline Has Already Had An Oil Spill

On Wednesday, reports of a minor oil spill from the Dakota Access Pipeline were confirmed by the Associated Press. While the spill occurred in early April, the Standing Rock Sioux tribe has expressed concerns that the news of the oil leak has only just been released. Even though its set to be fully operational on June 1, the Dakota Access Pipeline is leaking, much to the exasperation of both tribal leaders and environmental activists alike. Representatives for Energy Transfer Partners, the energy company constructing the Dakota Access Pipeline, did not immediately return Romper's request for comment.

The Dakota Access Pipeline oil leak occurred in Tulare, South Dakota, approximately 200 miles south of where the Standing Rock protests occurred. According to a statement by Energy Transfer Partners, 84 gallons of oil — two barrels — leaked from a pump station in a containment area during the course of testing. The oil leak began as early as April 4, but wasn't noticed until Tuesday of this week because the leakage was so small.

For leaders of the Standing Rock Sioux tribe, the size of the oil spill is irrelevant. They are more concerned about the fact that the Dakota Access Pipeline has already experienced an oil leak when it's not even yet fully operational.

Dave Archambault II, tribal chairman for the Standing Rock Sioux tribe said in a statement that April's oil spill is exactly what his tribe had feared:

The Dakota Access pipeline has not yet started shipping the proposed half million barrels of oil per day and we are already seeing confirmed reports of oil spills from the pipeline. This is what we have said all along: oil pipelines leak and spill.

Energy Transfer Partners reported that the two barrels of oil spilled from the Dakota Access Pipeline were completely contained and occurred in an area with lining over the exposed area. Even so, a small oil spill like the one along the Dakota Access Pipeline can still impact the environment, as environmentalists and tribal representatives have noted previously. Despite previous injunctions barring construction of the pipeline, President Donald Trump took executive action restoring construction on the embattled pipeline less than a week after assuming office in January.

Jan Hasselman, an attorney with Earthjustice who's representing the tribe, told Vice News that oil spills such as the one that occurred in April are "all but inevitable." Rebecca Craven, a program director at the Pipeline Safety Trust, told NBC News that "these kinds of spills do occur." Meanwhile, Brian Walsh, an environmental scientist with South Dakota's Department of Environment and Natural Resources, told the AP that relatively speaking, the size of the spill was a "small operational spill that was cleaned up right away."

As Hasselman told Vice News, fears that more and bigger spills are real among the tribe, noting that regulatory and impact study fast tracking ignored the tribe's concerns. "It doesn't give anybody any pleasure to say, 'I told you so,'" Hasselman said. "But, here we are."