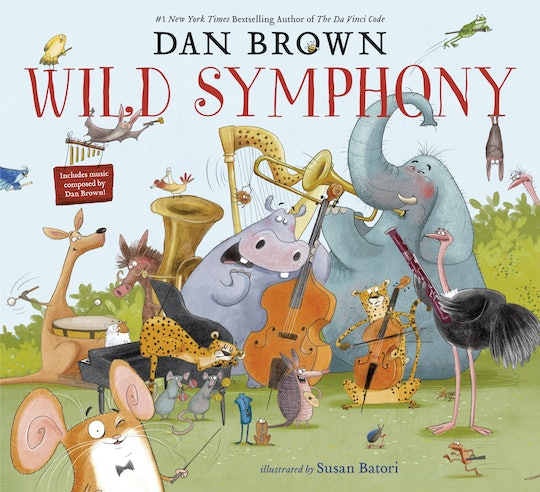 Better known as the king of historical mysteries, you might have predicted that Da Vinci Code author Dan Brown’s next book would be another Illuminati-laced tour through the past. Spoiler alert: It’s not. Rather than publish another adventure starring the fictional Harvard symbologist Robert Langdon, Brown has created a new character to headline the next chapter of his literary career: Maestro Mouse, a music-loving rodent. That’s right, Dan Brown’s Wild Symphony is a picture book all about an orchestra conducting mouse who gathers characters from all over to play in his symphony.

Naturally, the innovative author didn’t just write a children’s book, though. Wild Symphony is, in fact, a reading-listening-playing trifecta complete with an accompanying score and integrated app children can use to listen to the right song for the right animal. Why, you may be asking, would a man who built his reputation on riddle-based thrillers switch gears to children’s literature? As it turns out, Brown’s idea was inspired by his love of music.

“When I was growing up, my parents decided not to have a TV so I played piano and read a lot,” Brown says in a video on the book. “I loved music as a kid and I still do.” Wild Symphony is Brown’s effort to share that passion with young readers. With Wild Symphony their not just getting a literary experience, but a sonic one as well.

For each of the wild animals in his book, Brown wrote an original piece of music to go with them. That means, as a child turns the page to the busy beetles, the accompanying music (which they can listen to by scanning a QR code on the page with the Wild Symphony app) is zany and wild. Or, if they skip back to the page with kangaroos, the music is bouncy and upbeat just like the amazing Australian animals themselves.

The renowned Zagreb Festival Orchestra in Croatia performed and recorded the Wild Symphony score which is now available to listen to on all music platforms including Tidal, Spotify, and more.

But this story isn’t just about music. Naturally, the lover of codes and symbols couldn’t entirely shake off his yen for embedding clues in his stories. Wild Symphony has its own mystery to uncover with hidden letters placed on each page. Children are invited to find the clues Maestro Mouse has hidden along the way and use them to spell out a coded message at the end.

And, because you can’t release a symphony without a premiere, Brown has two big events slated to go along with the release of Wild Symphony. The U.S. premiere of the orchestral music from Wild Symphony will occur in Brown’s hometown of Portsmouth, New Hampshire, on November 16, 2020, at The Music Hall, performed by the Portsmouth Symphony Orchestra. Proceeds from ticket sales will go to The Music Hall and the Portsmouth Symphony Orchestra, both 501(c)3 non-profit arts organizations. Prior to that, the world-premiere concert with the Zagreb Philharmonic Orchestra is scheduled to take place on October 10, 2020, at Lisinski Hall in Zagreb, Croatia, where Wild Symphony was recorded.

Since it’s likely travel will still be off the table for those events, young readers and music enthusiasts alike might prefer to just order the book which is sure to be an exciting read.

More Like This
Chelsea Clinton On Teaching Her Kids How To Embrace A New Sibling
The Stolen Year: Anya Kamenetz Wants To Know Why U.S. Covid Policy Failed Children So Spectacularly
39 Halloween Trivia Questions & Answers
The Best Halloween Family Pajamas To Match Your Boos