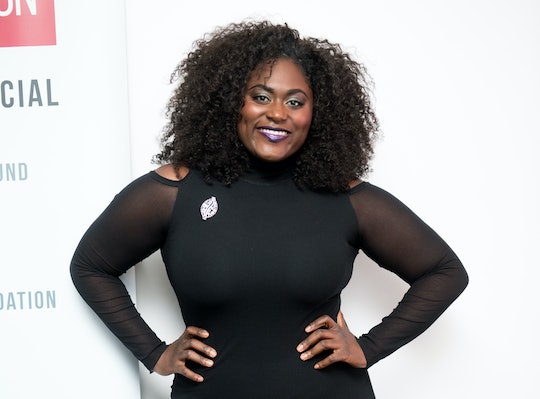 Orange Is the New Black star Danielle Brooks has given birth to her first child, a baby girl, with her boyfriend. Known for playing Natasha "Taystee" Jefferson in Netflix's popular dramedy, Brooks is now taking on the new role of mom after welcoming the adorable baby on Saturday, according to her Instagram announcement.

Two days after the little girl's arrival, Brooks took to Instagram Monday to share the baby's first photo. "11.16.19. She’s perfect," the actor captioned a black and white shot of the infant snuggled up to her chest.

At the time of this writing, Brooks has yet to reveal her daughter's name.

Brooks first revealed she was "happily pregnant" in a sponsored Instagram post published, in partnership with pregnancy and ovulation test manufacturer Clearblue, in early July. "So elated to finally share this news with you all," she wrote in a message to fans. At the time, Brooks was reported to be roughly 5 months into her pregnancy, according to Refinery29.

While Brooks' pregnancy coincided with the debut of the final season of Orange Is the New Black, the actor appeared upbeat about beginning this next chapter in her life. "When one chapter ends, another begins," Us Weekly reported Brooks writing in an Instagram Story posted shortly after taking her pregnancy public. "Super excited to share with you my new beginning. I'M PREGNANT. Counting my blessings."

The 29-year-old actor then showed off her baby bump at the New York City premiere of Orange Is the New Black's final season in late July. Brooks hit the red carpet in a long-sleeved, silver sequin Christian Siriano gown, sequined white tuxedo jacket, and oversized white hat from Sarah Sokol Millinery, creating a look she described as "Glammed Up Pimp-Mama" on Twitter.

Of course, like many moms-to-be, Brooks found there were some challenges to being pregnant. In a July 25 interview on Late Night with Seth Meyers, Brooks opened up about the ways pregnancy can sometimes ruin even the best laid plans. "My feet are swelling and I brought some shoes, and they don't fit and they hurt," Brooks told host Seth Meyers when he asked why she'd walked out in pink fuzzy slippers. "I'm going into my third trimester tomorrow, so I'm going to keep it 100."

Then, on August 15, the actor also turned to Instagram, and a little creative songwriting, to bemoan the hardships of finding fashionable plus-sized maternity clothes. "It's so hard to find cute plus size maternity fashion while pregnant, but ima push through," she wrote in a post featuring a video of her singing. "Although I get to be pregnant, I still can't find no clothes," Brooks sang. "It's so hard to find some clothes when you're pregnant."

To prepare for the birth of their first child, Brooks revealed she and her partner had taken a comprehensive childbirth class with Steffanii Blair, the owner of Blair & Bloom. "Steffanii was an incredible instructor and walked me and my partner through everything we needed to know for upcoming labor and delivery. Pre and post," the actor wrote on Instagram in early September. According to their website, Blair & Bloom offers childbirth, breastfeeding, newborn care, and CPR classes throughout the New York City and northern New Jersey area.

All in all, it sounds like Brooks had a great support system to see her through her pregnancy and I bet her loved ones are thrilled about the baby's arrival. Congrats to the actor on her new addition!

More Like This
Why Gwyneth Paltrow Trolled Us All With $120 Gem Stone-Encrusted Luxury Diapers
Kate Middleton Keeps Getting “Broody” Around Adorable Babies
Andy Cohen Sweetly Calls Surrogate Who Carried Daughter Lucy His "Partner & Friend"
Michelle Williams Is Going To Be A Mom Of 3!