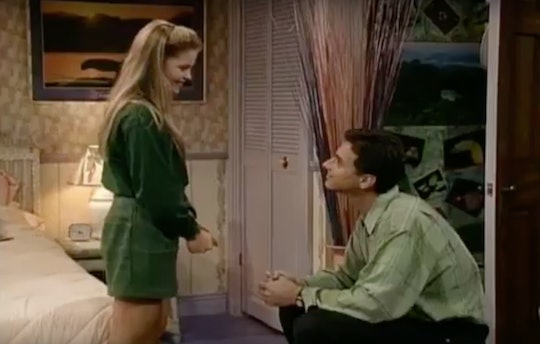 Need a pep talk? You got it, dude. Anyone who grew up watching Full House and now has kids of their own probably wishes they had a little Danny Tanner encouragement to give them when they have a fight with a friend or get a bad test grade. Turns out, you can still succeed talking to your child about hard topics, even if you look nothing like Bob Saget.

Mr. Tanner is one of TV’s favorite fathers, and the biggest reason for that is his patience and compassion for his girls. The show portrayed a dad and his daughters tackling everyday difficulties and larger issues, like the pressure to look perfect and the loss of their mother. And no matter what the problem, the Tanner girls always felt better after a chat with their dad.

Whether it’s just a rough day or something serious, talking to your kids about difficult topics can feel frustrating when your pep talks don’t work as quickly as Danny’s. Bruno J. Anthony, PhD, Chief of Psychology at the Pediatric Mental Health Institute at Children’s Hospital Colorado, tells Romper in an interview that parents should focus their pep talks on building long-term resilience.

“The thing I liked about Full House is that they did address these kinds of things in serious ways at times. Pep talks sound like something you only give on the baseball field, but we’re really talking about encouragement, and making it specific,” he explains.

Anthony’s advice for having productive, mood-boosting pep talks with your child include speaking positively and listening closely. “These are definitely research-based. You want to use positive phrasing. You don’t want to say, ‘Don’t get any answers wrong on the test.’ Try, ‘Remember all the things we’ve studied together!’ Be present. Make eye contact. Don’t talk forever so you can get their feedback. Validate their emotions, like, ‘I know it’s hard to lose, but it’s important to remember you did your best.’ You want to be in tune with them so they know you’re understanding what they’re feeling.”

When Mr. Tanner had to tell Stephanie her friend Gia had been in a car accident, he also questioned her about wanting to hang out with her earlier that day. DJ explains that when Gia showed up with two unfamiliar boys, Stephanie chose to stay home, and Danny praises her for having such good judgment. When it comes to a pep talk, praising your child about specific things they’ve done well goes a lot further than just telling them they’re a great kid.

“You want to be selective and specific. You don’t want to just say, ‘Great job,’ but say, ‘I remember in the last game, you really passed the ball well.’ That means you’re paying attention to what they’re doing,” Anthony says.

When it comes to toddlers like Michelle, it’s challenging to talk about exactly what they’re feeling and why. Anthony recommends getting on the little one’s level to learn more about what’s bugging them. “To make them feel better, you again want to let them just talk to you,” he says. “Stop what you’re doing; join the child in what they’re doing. Often kids will start talking about things when they’re having play. If you’re playing LEGO castle with a child and they’ve had a loss or disappointment, you can almost set up the play to talk about it. ‘Sometimes the queen leaves the castle, and I wonder if that makes the king sad.’ Then have a good ending to things. ‘I know the queen moved away, but she can visit often.’ It’s about being with them, using their play, and coming back to the issue you know is important to them.”

The only thing harder than talking to a toddler about tough times is talking to a teenager. With teens, pep talks should be less about talking and more about listening. Letting your teenager open up at their own pace keeps them from feeling pressured, and Danny Tanner definitely did this. Plus, if you listen well, you can hear hints that they may want to talk something over with you.

“They’re more likely to be open if they don’t feel the pressure to share information. You have to hear little things, which are conscious or unconscious cues kids give that they want to talk about something,” Anthony says. “In a therapy session I had with a patient, she was wanting to talk about her sexual identity. When I asked about these things directly, I wasn’t getting anywhere. What she said is, ‘I hate those people who are really mean to gay people,’ so that’s when you say, ‘Tell me more about that.’ Hearing those cues and following up on them leads to the concerns they have. That’s when you can start doing those pep talk things.”

Of course, many of Mr. Tanner’s pep talks didn’t involve much discipline, even when it was probably warranted — it wouldn’t make for good TV. Remember when a young Stephanie drove Joey’s car through the kitchen wall while playing in the front seat? Danny expressed his happiness that she was OK and told her the kitchen could be repaired, but she was irreplaceable.

But… she drove a car into the house. How can parents in real life have Danny Tanner-level love and patience in their conversations, while still teaching kids a lesson? There is a way.

“If you’re feeling angry about what happened and want to let the kid know that’s something you don’t appreciate, if you do it right away, then you have your emotion behind those messages and kids tune it out because you’re yelling or angry,” Anthony explains. “Once your anger dies down and you can control your emotions, then you can talk about what they did wrong using that positive phrasing. ‘Instead of getting into the car, what are some other things you could have done?’ Talk with other kinds of options they may have had.”

Although your pep talks may never go as well as Mr. Tanner’s, remember that he had a script. As long as you listen and show your child you love them, they’re bound to feel at least a little bit better after talking with you. Anthony’s best advice is to remind kids that every challenge is a learning opportunity. “When you have a difficulty, you want to say, ‘It’s not because you don’t have the ability to do this. You just haven’t had a chance to learn yet.'" And then maybe follow it up with a good old-fashioned Danny Tanner hug.