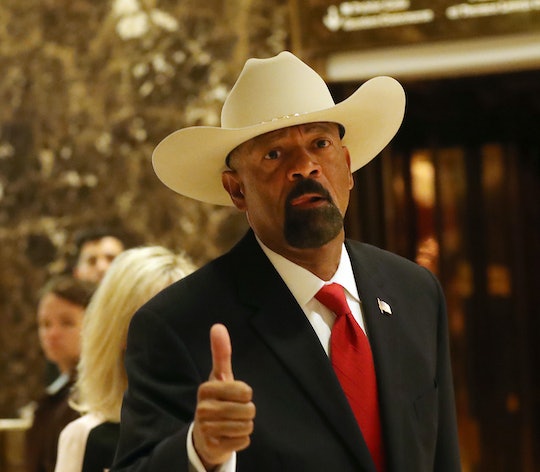 David Clarke Jr., the Milwaukee County Sheriff, has no trouble speaking his own mind. This is something he has in common with President-elect Donald Trump, not to mention basically every other member of Trump's potential Cabinet. They all love to speak their minds, fine. We get it. But before Clarke reportedly said terrorist sympathizers should be jailed at Guantanamo Bay indefinitely, perhaps he should have thought twice, or at least reconsidered how, exactly, he planned to go about speaking his mind — especially because he's now reportedly being considered to take the place of secretary at the Department of Homeland Security in the Trump administration.

Sheriff Clarke met with Trump on Monday at Trump Tower in New York. A member of the NRA and host of the radio show "The People's Sheriff" on the Blaze Network, Clarke was an avid supporter of Trump throughout the 2016 presidential election. While hosting "The People's Sheriff" last year, Clarke proposed that any terrorist or ISIS sympathizers living in the United States should be rounded-up and sent off to Guantanamo Bay indefinitely, according to Mother Jones:

I suggest that our commander in chief ought to utilize Article I, Section 9 and take all of these individuals that are suspected, these ones on the internet spewing jihadi rhetoric ... to scoop them up, charge them with treason and, under habeas corpus, detain them indefinitely at Gitmo.

Clarke estimated there were as many as one million terrorist sympathizers who would need to be imprisoned, and suggested suspending habeus corpus by using Article I, Section 9 (a part of the Constitution that gives the president the right to suspend legal rights and protection from unlawful imprisonment, according to Slate).

While imprisoning one million people at Guantanamo Bay Prison might seem impossible, Clarke reportedly believes it can be done:

We have no idea how many people out there have pledged allegiance or are supporting ISIS, giving aid and comfort, but I would suggest hundreds of thousands, I would suggest maybe a million. It's just a guess. And then you take the known terrorists that are here, and you think we're going to arrest all these people and put them in jails and then sentence them to prison? It's idiotic. [Take them to] Gitmo and hold them indefinitely under a suspension of habeas corpus. We're at war. This is a time of war. Bold and aggressive action is needed.

Representatives for the Trump transition team did not immediately respond to Romper's request for comment.

The position of Homeland Security secretary, whose mission it is to "secure the nation from the many threats we face", would see Sheriff Clarke in charge of a staff of 240,000 people. President-elect Trump is also considering Kansas Secretary of State Kris Kobach for position, a man who is well known for his anti-immigration policies.

Great choices all around?