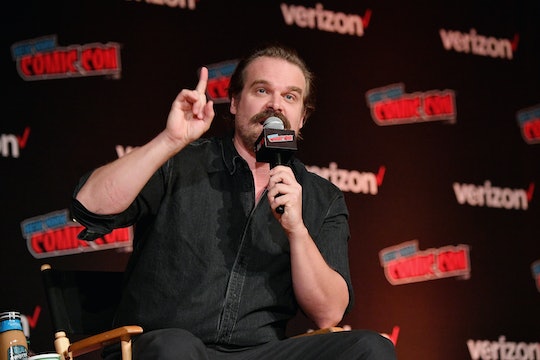 I think it's ridiculous to say that I was in love with Chief Hopper from Stranger Things. He's a fictional character and I'm a grown woman who is apparently too smart for such things. That being said, I will confess I probably loved him a little. Probably because he looked and felt like a real person to me. A guy who would eat chicken parmesan and begrudgingly watch Hallmark Christmas movies on the couch beside me. A man I recognize as human and sort of normal. And the good news is, he totally gets it. David Harbour's thoughts on "dad bods" in film are actually exactly what the world needs to hear right now. Because he's advocating for regular folk to be represented. And now, OK, I'm probably in love with him.

For those of you who don't know, Harbour has become something of the poster boy for men with regular bodies in the movies. Especially because he became the rather unexpected object of pretty much every woman's crush during his two-season stint as Chief Hopper on Stranger Things. Because here's the thing; women weren't attracted to Harbour's rock hard abs or whatever, as far as I know. The allure of David Harbour lies in his humanity; in the idea that he seems like someone you already know, a regular guy with a good sense of humor who is loyal and flawed and a hilarious dancer.

Harbour thinks he understand why people are reacting to his "dad bod," or as some might call it a regular body, if you will. During a recent interview with CNET Magazine, Harbour addressed his "funny relationship with this dad bod thing," as per People:

I sort of love it and the reason why I love it is actually very serious. I do think that in a certain way, I’ve become a bit of a sex symbol for our time — there are articles about people digging Hopper. But I’m also a little big and a little chubby. I love the idea of real bodies on television. And I love the idea of making real people beautiful and loved.

(It should also be noted his manly facial hair isn't hurting any).

Harbour went on to say he would love to see more body types that aren't "impossibly thin" represented as people worthy of love in movies and on television, as per Entertainment Tonight Canada:

This is such an important statement from a successful male actor in Hollywood. Women can't be the only ones leading the body positivity and body empowerment movements. More men need to speak out about unrealistic body representation in the entertainment industry, for both men and women.

And if David Harbour is looking for a strong representative of the mom bod, I'm happy to do my part here. Just sayin'.