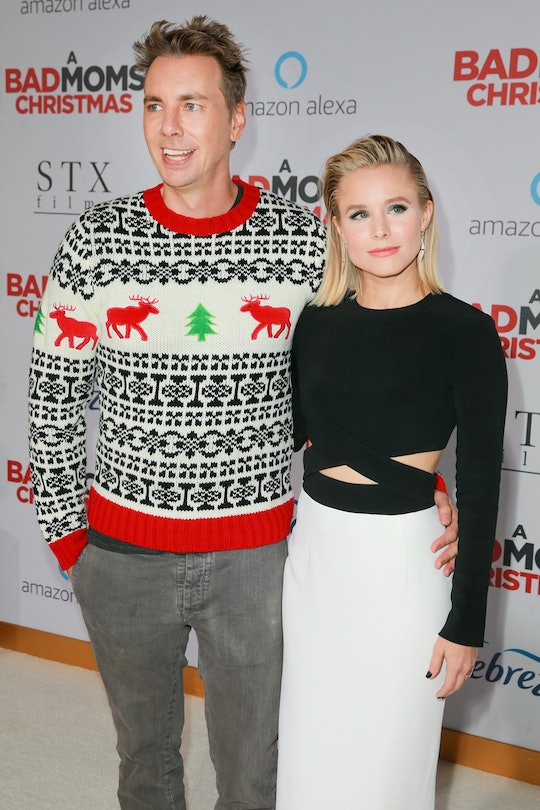 Fans of Kristen Bell and Dax Shepard would probably agree that the dynamic duo is seriously #relationshipgoals. Not only are both halves of this celebrity couple amazing actors, but they're also fantastic singers, podcasters, comedians — and pretty kick*ss parents, if you ask me. Because one of the beautiful things about their many talents is they don't allow their fame to compromise their daughters' privacy. Translated: Bell and Shepard have a strict, no-photos-of-their-faces policy when it comes to their kids. Even so, Dax Shepard's rare photo of his daughters is giving his followers a serious case of nostalgia.

It's like something straight out of the past, right? However, Shepard's followers seemed to appreciate the throwback vibe. "Those outfits — on point," one person commented.

Yet another person chimed in with, "So much awesomeness in one picture 😍👍🏼."

Nostalgia aside, it's always noteworthy when either Bell or Shepard share a photo of their little girls — even if it only shows them from behind — considering how protective they are of their kids' privacy. See, Bell and Shepard have purposefully not shared any close-up photos of Lincoln and Delta on social media, including shots that show their faces in any way. And they expect that paparazzi will also respect their wishes.

Back in 2014, Bell and Shepard were big proponents of the "No Kids" Policy movement, HuffPost reported. The movement was against paparazzi ambushing children of celebrities. according to the publication. In January of that year, Shepard tweeted, "Please boycott magazines that run pics of 'celebrity children.' They shouldn't be punished for who their parents are." Bell reaffirmed this stance in March 2014 on Access Hollywood. "I'm telling you right now, we don't want our daughter's face anywhere ever until she decides because I have the utmost respect for her," she said, in reference to their only daughter at the time, Lincoln.

Since then, Lincoln and Delta have mostly been MIA on their parents' social media feeds. Every once in a while, though, the actors will find creative ways to include their daughters. Like the strategically-placed flowers in this recent shot of the girls playing "beauty salon."

Or this sun-bleached photo of Delta and Lincoln playing together during a trip to the sand dunes.

Or this far-away shot of Bell "holding" one of her daughters in her hand as she's swimming.

I love that Kristen Bell and Dax Shepard are able to share funny parenting stories — and even clever shots of their daughters — while still protecting their privacy. Because as they've said themselves, why should celebrity kids have to compromise their lives as a result of their parents' jobs? Spoiler alert: They shouldn't. And I'm sure Lincoln and Delta will thank their parents one day for this gift.