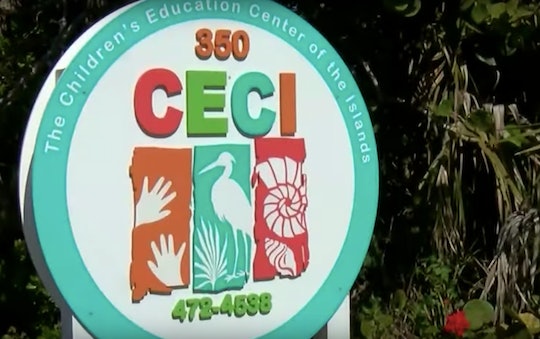 One Florida mom was understandably livid when she found a note written on her child after returning home from daycare. Days after Heather Chisum shared a viral post on Facebook detailing a message that said "Mom I’m out of diapers," which she discovered written on her 1-year-old's stomach in green marker, the daycare worker has been fired.

On Jan. 27, Chisum shared two photos on Facebook of the note written on her toddler son Milo and her outrage upon finding it. The busy mom shared that the daycare — Children's Center of the Islands in Sanibel, Florida, according to NBC News — will put a "daily report paper" in her child's lunchbox. "It says what mood he was in for the day, what times they changed his diapers, and if he needs diapers or wipes," she wrote.

But instead of putting the note in his bag or speaking to her directly, apparently one of the daycare workers decided to deliver the message a different way when Chisum, who said she is a single mom of two young children with a full-time job, missed one of these reports.

"Mom I'm out of diapers pls read report," the note on her son's stomach read.

While Chisum admitted that she "failed to see" the report about her son needing diapers, she said she sees several teachers during drop-off who could have simply told her in person. "Instead, I change his diaper this afternoon AND SEE THIS WRITTEN ON MY SON WITH MARKER," she wrote.

"I’ve scrubbed it with several baby wipes and it’s not coming off," she continued. "I had plans to take them to the beach to play, and now I can’t because my son has writing all over him. In the very worst case scenario, I can’t see anything other than 'need diapers' needing to be written. Why a big long message needed to be written across my [son's] stomach is beyond me."

Chisum initially reached out to Facebook to ask people if they thought she was "overreacting" by being so upset. And the responses were pretty much unanimous: of course she was not. Her post has been shared more than 32,000 times and has garnered hundreds of comments.

"This is down right disgraceful and very inappropriate," one person commented on her post. "You’re trying your damndest to make a living and make everything work not only for yourself but your babies. Heather this is uncalled for I am so sorry this happened. Another said, "You need to flip a lid over this! This is so unfair and not okay on any level."

Chisum also claimed that this wasn't the first time one of her children has been written on. "They’ve done this several months ago too," she wrote on Facebook.

Since Chisum's posting about the incident, the daycare provider who wrote that message has reportedly been fired, according to CNN. Cindy Carter DeCosta, executive director of Children's Center of the Islands in Sanibel, Florida, told the Fort Meyers News-Press they "are terribly sorry for the distress it has caused the family involved as well as all of our families."

"It was a breach of our professional ethics on the part of the teacher," DeCosta told the newspaper. "The school has taken immediate action to remove the teacher from the school. We are reviewing protocols already in place to ensure that nothing like this occurs again."

Romper's request for comment from Children's Center of the Islands in Sanibel, Florida was not immediately returned. Romper has also reached out to Chisum, but has not heard back.

Following the news of the daycare worker being fired, Chisum told the Fort Meyers News-Press that her kids would not be returning. And on Wednesday, Chisum wrote an update about the situation on Facebook, noting that she had received an awful lot of judgment from people making assumptions that she was somehow a negligent parent and placing the blame squarely at her feet. "So to answer everyone’s concern 'I wonder how many times she had to be told,' The answer is once," she wrote. "I was told once through a daily report that I missed because I’m a human and sometimes I miss things."