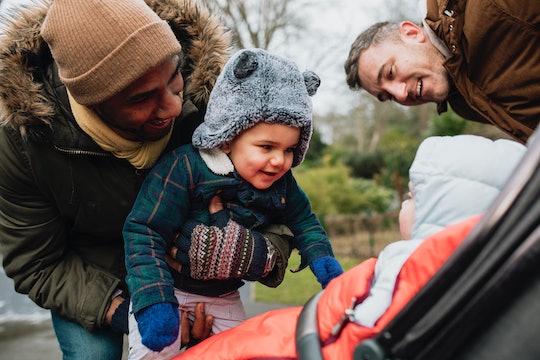 Dear Jenny: Do I Ghost The Anti-Vaxx Dad I Met?

I met a parent friend with a kiddo my daughter's age and they seemed cool until the dad very casually told me that their daughter isn't vaccinated and now I kinda want to ghost him forever. He's not crazy and we are aligned philosophically in many ways. He doesn't think vaccines cause autism, just is skeptical of the research and doesn't like government mandates and HONESTLY I'M NOT EVEN SURE WHY I CAN'T EVEN PLEASE HELP.

You can't even because you believe the research on vaccinations, and your friend doesn't.

I'm all for healthy skepticism of the government. Our current "government" is a sh*t show with a long history of screwing everyone, including the people it's entrusted to serve.

Same with the medical and research establishments, which have been skewed toward white, rich, cisgender male people and against everyone else.

This is a generalization, but it's mostly true.

Vaccines also have a history — of preventing horrible diseases from making people sick and even killing them, and of preventing their spread.

This is also mostly true, as far as I can tell.

Here's what I think: It's easy to surround ourselves with people who think the same way — although even when we cushion ourselves with "like-minded" people, we encounter differences that can make maintaining robust friendships challenging. For example, when my 2-year-old does something I would prefer he not do, I tell him (nicely) that I will dig his eyes out with a spoon. He thinks this is hilarious. My husband, and everyone else who has heard this, does not.

Mostly, we muscle through the small stuff (or try to), because friendships with like-minded people are important to our mental, emotional, and physical health. They can even increase our life span. Not that muscling through the small stuff is easy or we're always successful (I once drove miles across my hometown to demand a friend return the pen she'd borrowed. I was 16, but I still hear about this one).

Then there are the friendships we must walk away from. I once needed to end a friendship because I couldn't stomach the behavior of my friend and her husband toward, and in front of, their kid. Was it judgmental of me? Absolutely. I thought they were Bad Parents. I still do. But it upset me for many years, so finally, after attempting to address the situation, I walked away.

When a relationship is what we now call "toxic," you are within your right to walk away, whether it's a friend or a relative. In fact, for your mental and physical health, you should. Not all battles can be won, and not all need to be fought.

If you just don't want to be friends with him, you don't need to respond to his messages or phone calls.

But I'm not sure that's what's going on here. You say this guy is "not crazy," is "skeptical" of research, and doesn't like government mandates. I'm going to wager that these are characteristics you share, because on their face they are signs of a critical thinker.

What galls vaxxers so much is they believe people who don't vaccinate their kids aren't protecting them… and don't care about the community at large.

However, I've found that even the people I find the most loathsome, the most untenable, believe they're doing what is right by their children. It's what they've been taught and what is codified by the people they surround themselves with.

This does not mean you need to be friends with them. (And as Susan H. Wootton, M.D., a professor of pediatrics and an expert in infectious diseases, points out to me, it *could* be unsafe for your children to hang out if the unvaccinated child has symptoms of the measles or flu — vaccinations reduce the likelihood that you will get the flu, as well as the severity, but don’t nullify the risk altogether.) I've been on both sides of friending, trying to get close to people who aren't interested in me, and having people reach out to me where I'm like, "Meh!" This is OK. Friendships are an investment, taking time and energy, two things we have in limited supply. We should reserve our time and energy for the people who make us feel the best about ourselves and about whom we have no reservations of giving endlessly to, since that outward energy immediately circles back.

You say you want to "ghost" this person, suggesting you have a mechanism by which to ghost him (his phone number or social media). If this person is toxic to you — he makes you feel bad — you can avoid him completely. If you just don't want to be friends with him, you don't need to respond to his messages or phone calls. I know ghosting gets a bad rap, but I'd rather have someone simply not respond to an overture than invite me out for coffee and tell me exactly why they don't want to be friends with me. No, thank you! I'm aware of that one time I jumped into a hot tub naked and the time I barfed all over my own bathroom and then just went to bed. Rather than hear a list of my faults and past indiscretions, I would prefer to sit with the feelings of embarrassment and shame from being rebuffed, pointing to them like fluffy clouds or boats in the distance THANK YOU MEDITATION AND THERAPY and move on, because I'm lucky life affords me that opportunity.

Get curious. Start a conversation. Ask questions. Do not take it as an invitation to argue.

Side note: If you're one of those people who compulsively attempts to get in touch with someone who will not respond to you — and I have been this person all my life until recently — I understand your pain! Oh, the email series I've written, becoming more pathetic and wheedling and angry as the days go by! The long text messages! The pitiful voicemails! The sense of vindication upon pushing send that is immediately replaced by a cold sweat at the temples and a frantic search for old painkillers!

I suggest maintaining an open relationship with this person when you find yourselves in social situations. Get curious. Start a conversation. Ask questions. Do not take it as an invitation to argue or to try to change his mind or assert that your viewpoint is the correct one. Try to understand the root of his views, and compare where yours comes from. Think of it as fact-finding, with no goal.

I once found myself in a terrible restaurant in Yakima, Washington, and you'd think I'd remember why, but I don't. I was by myself, on some kind of road trip, and I sat at a table next to two older gents, one of whom was wearing a T-shirt with two crossed rifles and the slogan, "From My Cold, Dead Heads." They struck up a conversation with me, and all through my first glass of wine I managed to stick to my inner mantra: Don't mention gay marriage!

Then I had a second glass of wine, and I couldn't help myself.

Our conversation was one of the more memorable I've had. I live in San Francisco, so I don't get the opportunity to talk with political conservatives very often. I didn't get much more than Fox News sound bites from T-Shirt Guy, but Beard Guy told me the story of his daughter, who had died when she was 24, and how the pain of that loss followed him every day. I also discovered he was a "true" Republican: He didn't believe in gay marriage, but he also didn't believe the government should interfere in private affairs, and if pressed (and able), he wouldn't vote against it. His friend was shocked, as they hadn't known their viewpoints differed in this way.

The conversation was respectful in both directions. I didn't cede my view; they didn't, either. I don't find bigotry charming, but I left the conversation feeling pleased. And I think the reason was we'd put a human face on each other. And sometimes, in the face of extreme political opposition, that is the best we can do.

VACCINATE YOUR F*CKING KIDS. BUT DON'T HATE ON EACH OTHER. YOU GOT THIS.