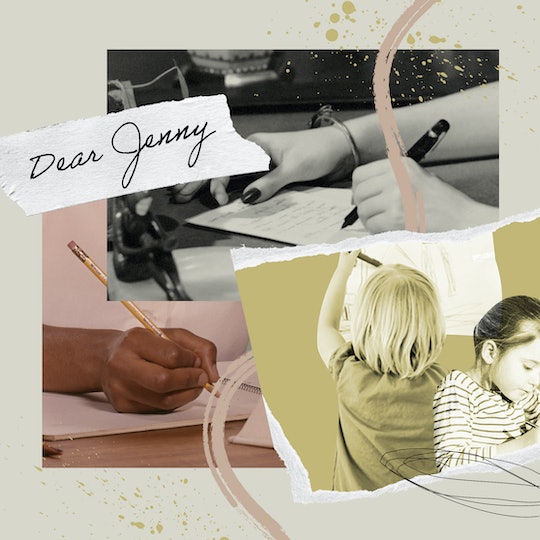 Dear Jenny: How Should My White Child Draw Race?

Our resident advice-giver-outer Jenny True provides shouty, full-hearted answers to your questions about pregnancy and parenthood in her column Dear Jenny. Warning: This is not a baby-and-me singalong, this is about yelling into the cosmos and actually hearing something back, sometimes in the form of an all-caps swear. Jenny isn't an ~expert~, but she has a lot of experience being outraged on your behalf. To submit your questions to Jenny, email advice@romper.com.

My child attends a diverse school, and I'm glad that she has classmates of different backgrounds and understands a bit about how race has affected Americans in the past (she is in kindergarten and has learned about slavery in broad strokes, and understands a little about emancipation). She is not "color blind," and actually the question I have is: When she draws classmates of color, she draws them much darker than she would draw herself, to the point that you can't see their features. I have tried explaining that she wouldn't want to be colored so you couldn't see her face, but I feel like I'm not using the right language, or I have this wrong. And yes, as a white lady I'm worried I'll ask the wrong question about this.

Oh, how things have changed since this letter arrived in late April.

At this moment, the vast inequities in quality of life between BIPOC and white Americans — including the simple right to live — are at the forefront of our cultural discussion. With cities nationwide committing to redirecting funds from their police departments to their Black communities, it looks possible that a change, as Sam Cooke said, is gonna come.

What does this have to do with your question, DL?

There are many stages to woke-ness, and I maintain hope that we white folks can get there. Unfortunately, even with daily examples of the structure of racism, and the obvious need for us to step up, a lot of us get mired — and I mean completely stuck — in the paralytic fear of being perceived as racist.

I don't think your daughter is doing anything wrong, and I don't think she should be corrected. But please don't stop reading. There's work to do.

I talked with Greg Morris, a diversity, equity, inclusion, and belonging expert, who said they were "struck that the [question] was just about skin color. That strikes me as a fragility question."

They're referring, of course, to the titular subject of a popular book by Robin DiAngelo, White Fragility: Why It's So Hard for White People to Talk About Racism (currently sold out on Amazon).

I noticed — you noticed — that you declined to ask a question. This choice — not even asking a question in case it's the wrong one — is emblematic of a culture among some white people of tiptoeing around issues of race — not because we are being polite, and certainly not in an effort to combat racism. It's about redirecting possible action toward anti-racism toward us and our feelings (again). It's about protecting ourselves.

As we have seen, we're not the ones who need protection. Our Black and brown sisters, brothers, trans and nonbinary folk, need protection. And we need to work through our sh*t to become true allies.

The word "racist," Morris agrees, stops white people in our tracks. But, they say, "the bottom line is that we have these racist structures [in place] that have racist outcomes, [and] in spite of our best intentions, we are going to end up supporting these things."

Says Morris, "We all fear being called racist — there's a lot of history that set us up to be a culture that has a lot of racial bias and racism in it. But if I take the approach that I'm going to be immune to that, then I'm not going to help my child."

Your question, DL, indicates a willingness to become anti-racist.

Your daughter is noticing racial differences, which is not the same thing as being racist. But if you continue to intervene and tell her she's doing something wrong, she's going to get the message that racial differences are bad. At worst, this means that from a young age, she'll miss the opportunity to develop her understanding of racial inequity, which limits her ability to combat it. She'll be fine, because she's white — but this will put other people's kids at risk.

I have a couple of questions: You say "when she draws classmates of color, she draws them much darker than she would draw herself." Are her classmates darker than she is? If so, do you feel she should be drawing them the same shade she is? (This pack of 24 crayons in 24 "People Colors" may help — only $6.99!)

Another question: You say, "I have tried explaining that she wouldn't want to be colored so you couldn't see her face." Has your daughter expressed this concern to you? Or is this a projection of your fear of her being perceived as racist?

Our fear, and our discomfort, cause us to avoid even talk of race and to cringe when it comes up, correcting, shushing, and ultimately confusing our kids, because the message they get is that the differences they notice are shameful.

But there's a new understanding of "racist" — in essence, it's the opposite of being "anti-racist." Simply put, being racist is not working against the system of racism that benefits white people and disadvantages BIPOC.

Your question, DL, indicates a willingness to become anti-racist.

You have an opportunity with your daughter to start a conversation — and not the one-and-done sort, but the kind that starts today and never ends (since racism doesn't sleep).

And, from one white woman to another: You and I don't need to fill in the blanks for our kids for them (although I maintain that not being racist is good for the soul). We need to fill in the blanks for other people's kids. Because other people's kids are as important as ours, and our kids — the ones with race privilege — are the ones who are going to do some damage if we don't step up.

I encourage you not to correct your daughter's observations, but instead to ask about them. There are some wonderful resources about how to get started, including these 10 tips for talking to kids about race from EmbraceRace; this episode from the Longest Shortest Time podcast; and the website Raising Race Conscious Children, which helps adults talk about race with young kids. (It's also important for you and I listen to such perspectives as the episode "Side Effects of White Women," from the podcast Small Doses with Amanda Seales.) If you continue to let your daughter's school lead the conversation, it might end with slavery = bad and Martin Luther King Jr. = good, which is true, but the experience of race in the U.S. is more complex and nuanced, and it gets more complex and nuanced every day.

Morris says it's key to check in with yourself when you notice feelings of discomfort around race: "Remind yourself, 'I might be a little touchy about this.' And, 'I don't want to jump to conclusions about what my child is doing.' And, 'I may very well want to have a black-and-white reaction: I might want to jump all the way in and ... talk about the KKK ... and give up five minutes later. So I'm going to watch out for the black-and-white response."

Also, says Morris, if you decide to talk to your daughter about her drawings, "curiosity about the child" is a great approach: "If there's no judgment in the parent's attitude, then [she] could ... say, 'You drew your friends! You really tried to capture them. That's great, that's wonderful. What else is distinctive that you want to show? If you show brown skin, how do you draw their eyes? Oh, look! It was hard to get the eyes the same, wasn't it? What were you trying to do here? Was it hard to represent the different skin colors?"

WHITE PEOPLE: TALK TO YOUR KIDS ABOUT RACE. NOW. NOT WHEN THEY BRING IT UP. NOT WHEN YOU'RE FEELING MORE COMFORTABLE. NOT WHEN IT'S THE RIGHT TIME. NOT WHEN THEY'RE "OLD ENOUGH." TODAY. HEY YOU. TODAY. YOU GOT THIS.

More Like This
From Captions To Gifts, These Are All The Kindergarten Graduation Ideas You Need
Fun Ways To Celebrate National School Nurse Day
34 Instagram Captions Perfect For Preschool Graduation Photos
When Is National Brother's Day?