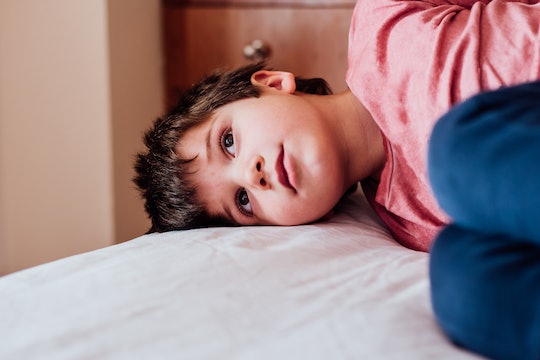 Dear Jenny: Is My Kid Sick, Or Just Dreading School?

I have two daughters ages 9 and 11. The younger one loves school, and if she doesn't want to go, I can always tell she is sick for real. My older daughter is another story. She is extremely sensitive, and she often talks about certain girls at school not being nice. She also gets a lot of stomach aches. In the first quarter of school this year already she missed eight days. That's eight days in only 10 weeks of school. Last year she missed something like 25 days of school over the year! She complains of a tummy ache, and I try to suss out if it's a real physical ailment, or caused by anxiety. That is really hard to do.

We have taken many trips to the doctor only to be told there was nothing wrong. I don't want to keep her out of school if she can possibly go, and I want her to learn to deal with mean kids if that is the issue, because dealing with sh*tty people is part of life. But I also don't want to make it worse by sending her if she is truly physically ill. And, even if it is anxiety, she's still feeling discomfort. When she feels bad, she is really hard to deal with and so often I let her stay home because it's just easier. Help! How should I handle this?

I didn't fake sick until the fifth grade, when we moved and I went from being a Pretty Happy Kid in roller skates and red glitter heart head boppers to an Anxious, Miserable Adolescent and then an Anxious, Miserable Post-Adolescent, a state that continues today. The times I remember being Actually Sick — strep throat, chicken pox, a boil in my armpit (really) — are few and far between.

Sometimes, kids are sick. Generally, you know when they are. They have white spots in their throats (or red spots on their bodies), they have a fever, they're throwing up, they have diarrhea, they have a rash. They don't want to watch YouTube or Rainbow My Little Pony Unicorn Whatever the F*ck and they're unmoved by offers of ice cream. (WebMD has a great list of symptoms for anxious parents to check out.) Sick kids get to stay home.

Sometimes kids have colds, or allergies, and they're just not feeling well. They're sneezing, they're coughing, they have a runny nose. Contagious kids get to stay home IF — and this is a big IF — you want them to and you have the resources to cover child care. Otherwise, everyone signed up at the germ office when they had kids and agreed that school is a big petri dish of disgustingness.

Sometimes kids get stomach aches because they aren't drinking enough water, or they're not eating healthy food. Maybe your kid ate nothing but doughnuts and hot dogs the day before. Tough sh*t: They have to go to school. Maybe your kid doesn't have access to healthy food (say you live in a food desert) or is hungry; in the case of this serious issue, their school may attempt to address it with the national School Breakfast Program or the National School Lunch Program. If you're struggling to pay for food, some government programs (like SNAP, and CalFresh in California) may help.

But kids who have stomach aches don't get to stay home (unless they have an ulcer or some other serious problem).

Your kid needs to be in school as much as possible. That's where she learns stuff, including how to deal with stress.

Because sometimes, your darling child, who is currently not hungry, who does not have allergies or a fever or a rash, and who is mostly honest, puts on an Oscar-worthy performance of being sick, alternately limping and coughing and complaining of an upset stomach.

And you narrow your eyes at this child, this child whom you may have carried in your womb, for whom you have suffered and sacrificed and paid through the nose and pulped sweet potato mash through a sieve, and you think, THIS CHILD IS LYING TO MY FACE.

Maybe they simply want to avoid a particular homework assignment, or they want to spend time with you. If "sickness" is a frequent occurrence on certain days of the week (Monday morning? Welcome to the club!), they may be trying to avoid something in particular: Is it P.E. day? Do they have to read out loud in class today?

And there may be no discernible pattern, because the stressor (or stressors) has none. Your kid could be anxious about any number of things going on at school, before school, or after school. Say she's recently moved from Saudi Arabia, where she's lived since kindergarten, to downstate Illinois, where everyone's new and her fifth grade class has a queen bee who's sometimes nice but sometimes writes mean, horrible notes. And her first real-live "boyfriend" broke up with her for Rachel with long brown hair and returned the eraser she gave him. And suddenly she has braces and glasses and has been informed that her socks don't match her outfit, which never occurred to her as a requirement, since they're fucking SOCKS. They have to "match"? WHAT IS MATCHING AND WHY DOES EVERYTHING SUDDENLY SUCK AT THE SAME TIME??????

Just like adults, kids who are under stress exhibit physical symptoms. Some of the most common are stomach aches, loss of appetite, headache, sleeplessness, fatigue, and even acid reflux or vomiting. And anxiety and depression, even if they're temporary reactions to temporary situations, need to be taken seriously.

The bottom line is: Your kid needs to be in school as much as possible. That's where she learns stuff, including how to deal with stress. If she's really sick, she gets to stay home — but if she's not, it's time to talk.

You might not even respond with words, but rather nod or grunt or say 'Mmm' or 'Oh' or 'I see' in response, no matter how f*cking hard it is not to correct her or ask more questions or give advice.

You can check in with your kid's teacher or other school personnel (or after-care providers, or other adults your kid has contact with) for partnership on figuring things out (and on addressing them). And there are other resources. When it comes to talking to kids, I return to How to Talk So Kids Will Listen and Listen So Kids Will Talk by Adele Faber and Elaine Mazlish, first published in 1980 (and chock-a-block full of illustrations of moms in turtlenecks, vests, and bell bottoms — groovy!).

An appropriate response to your situation is to investigate your daughter's feelings — as opposed to trying to get her to do something (such as get out of the house without pretending to fall down 13 times) or punishing her (for lying about being sick, or pretending to fall down). The authors have many suggestions. I'm most moved by their recommendations of what not to do — for example, denying her feelings ("You're being unreasonable!"), trying to solve her problem (aka giving advice), asking millions of questions, or belittling her reaction to stress or calling her names (SUCH AS LIAR LIAR PANTS ON FIRE).

Instead, the authors recommend making an open-ended statement of the obvious ("You seem like you don't want to go to school") and then just sitting there and LISTENING AAAAAGH. You might not even respond with words, but rather nod or grunt or say "Mmm" or "Oh" or "I see" in response, no matter how f*cking hard it is not to correct her or ask more questions or give advice. This is to get her to keep talking. It will help if you're able to reflect back some of the feelings she's expressing, rather than gazing at her dispassionately.

The authors also recommend giving her feelings a name ("You seem upset"), although some child experts recommend against doing this. They also have this wonderful piece of advice that has worked in my house: Instead of responding with explanation and logic ("If you have one more unexcused absence, Mommy is going to be charged with a misdemeanor!"), give them their wishes in fantasy: "I wish I could let you stay home! I wish we could go to Disneyland together and rides on all the rides!" Suddenly, you're having fun together, and your daughter is feeling heard.

These tactics are designed to encourage your kid to talk honestly about what's really going on, without derailing her in all the ways we derail our kids, and letting her become part of the solution: either by coming up with a solution on her own (because she's been given the space to), or by remembering she has a support system (because she knows going to Disneyland with you is a fantasy, but she gets to go there before returning to the cold, hard reality of K–12).

Obviously, there's no time for this first thing in the morning. So if she's not deathly ill, you have two choices: Let her stay home (if you can) and have the conversation during the day. Or make her go to school, and if you don't get a call from the nurse sending her home, talk when she comes home. Over ice cream. AWW ISN'T THAT SWEET.

B.J. MILLER SAYS THAT BEING A HUMAN BEING IS INHERENTLY DIFFICULT SO GETTING THROUGH THE DAY IS A CREATIVE PROCESS. IMAGINE BEING A HUMAN BEING WHO CAN'T NAME THEIR FEELINGS OR TALK ABOUT THEM. YOU MIGHT GET CREATIVE TOO. YOUR KID IS TELLING YOU SOMETHING IS WRONG IN THE BEST WAY THEY KNOW HOW. COMMIT TO GETTING TO THE BOTTOM OF IT WITH PATIENCE AND COMPASSION. YOU GOT THIS.