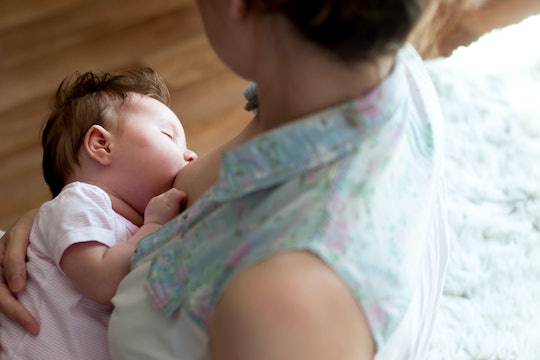 Dear Jenny: I Get Sad When I Breastfeed, Ugh

I knew and expected breastfeeding to be hard, and am happy to say we got through the screaming nipples part of proceedings to a place where I can nurse my now-three-month-old. But often when I go to nurse my son, and settle into the chair ready to snuggle, etc., I actually feel a wave of, sort of, Ughhh. It doesn't last, and it's the kind of thing that, once it passes, you wonder if it ever happened. But then the next time, that same wave of a bummer, before it levels off. I want to keep breastfeeding, but I hate that I feel this way. Advice?

OH MY GOD I KNOW EXACTLY WHAT THIS IS BECAUSE I HAVE IT TOO.

The nightmare you are describing, which was identified only around 2007, is D-MER, or dysphoric milk ejection reflex.

Researchers don't yet know how many women suffer from it (the International Breastfeeding Journal writes that "direct research is non-existent"), but an informal poll of my friends leads me to believe it's not rare.

Most women don't feel the drop in dopamine. But some feel it like the death of River Phoenix, if one happened to be in the twelfth grade in 1993.

As usual, hormones are involved. This is what seems to be happening: When a breastfeeding mother's body prepares to make milk, two hormones are released: prolactin (which makes the milk) and oxytocin (which moves it out of the breast). The rise in prolactin leads to a drop in dopamine, a neurotransmitter. Most women don't feel the drop in dopamine. But some feel it like the death of River Phoenix, if one happened to be in the twelfth grade in 1993.

This is what milk release feels like if you don't have D-MER (I am told):

1. A tingle in your boobs and a feeling that they're full.

This is what milk release feels like when you have D-MER:

1. OH MY GOD I'M SO DEPRESSED/HOMESICK/ANXIOUS/ANGRY/PANICKY/NAUSEATED/EXHAUSTED WHY DID I EVER HAVE A BABY AND MARRY A MAN WHO DRIVES A MINIVAN WITH THREE BROKEN DOOR HANDLES EVERYTHING IS SHITTY ALSO RIVER WOULD HAVE BEEN 48 THIS YEAR AND MAYBE WE COULD HAVE GOTTEN TOGETHER IF HE'D LIVED.

2. A tingle in your boobs and a feeling that they're full.

"The best way I can describe it," says Taryn, "is nervous butterflies, followed by a strange, anxious feeling of loneliness and despair that feels closest to homesickness."

Yep, says Laura, who calls the feeling "lonely as hell. So weird, like I was homesick or something."

And my girl Ami says: "Have you ever taken ecstasy?"

NO YES NO WHY ARE YOU ASKING.

"You know how the day after … you feel the black chasm of agony and abject hopelessness?"

IT'S POSSIBLE I TOOK SOME ECSTASY IN THE '90S AND MAYBE THE AUGHTS AND MAYBE SOME OTHER TIMES BUT I NEVER FELT DEPRESSED AND I ALWAYS THOUGHT PEOPLE WERE JUST ACTING THAT WAY BECAUSE THAT WAS HOW YOU WERE SUPPOSED TO ACT.

I'm pretty sure I experienced D-MER from the beginning. But a lot was going on those first few weeks postpartum: recovering from a 40-hour labor, with one stitch in my labia and my new friend the hemorrhoid, not sleeping or bathing or eating or exercising or leaving the house, postpartum anxiety, and hormone-induced hot flashes and delirious laughter/crying jags NO I AM NOT LIKE THIS NORMALLY THANKS FOR ASKING.

So it took me a while to identify this additional crock of sh*t, and I wondered if it was postpartum depression (PPD). But the waves came and went quickly — within seconds — so PPD didn't seem right.

Finally, when my son was about three months old, a light bulb flickered on and I realized the waves of sadness (and exhaustion, and nausea, and an inability to focus) were happening at the same time as breastfeeding.

THANK GOD FOR GOOGLE. It led me to a Wikipedia page, and when I checked in with my lactation consultant, she sent me to a case study ("D-MER probably results in unwanted cessation of breastfeeding at times," the report notes with resignation).

THIS WAS ACTUALLY A THING. WHY DID NO ONE TELL ME.

I'm not sure why it's not part of postpartum care, especially for lactation consultants, to mention D-MER. Enough of my friends have experienced it that it doesn't appear to be rare. All it would take would be: "If you experience a feeling of sadness, homesickness, anxiety, anger, exhaustion, nausea, loss of appetite, or lack of focus right before you start to breastfeed — and then, within 30 seconds to two minutes, it goes away — that's a known condition. It's not postpartum depression, and instead of quitting breastfeeding without more information or muscling through without talking to anyone, here's a brochure with the basic facts."

One enormous benefit of knowing about D-MER is that, for many women, just knowing it's a thing helps them deal. And it's critical to know that it's physiological (related to your body) not psychological (related to your mind). This means that, although D-MER is defined by a negative emotional response, it isn't sadness about breastfeeding. (Although you can have that, too! Yay!)

These days, I'm nursing a 13-month-old, and the intensity of D-MER has waned, but I still feel it every time. I don't always feel the sadness; in fact, sometimes all I feel is a fatigue so intense sitting up is too exhausting and I visualize myself curled up on the floor. Progress!

So if you have D-MER, what do you do?

Unfortunately, there's no treatment currently. Some women continue to breastfeed, reassured that the negative feelings, although consistent, pass within seconds. But some choose to quit breastfeeding. And some take medication (I can't recommend the efficacy or safety of any medication; check with your healthcare provider). Either way, a Facebook group offers support, and the woman who first identified the condition and named it, Alia Macrina Heise, has written a book, Before The Letdown: Dysphoric Milk Ejection Reflex and the Breastfeeding Mother (hey, that's us!).

More Like This
Can You Mix Breast Milk & Formula? Experts Weigh In
Here’s Your Guide To Paced Bottle Feeding
Here's How To Keep Your C-Section Incision Dry
13 Nursing Bras & Pumping Bras You'll Actually Love To Wear