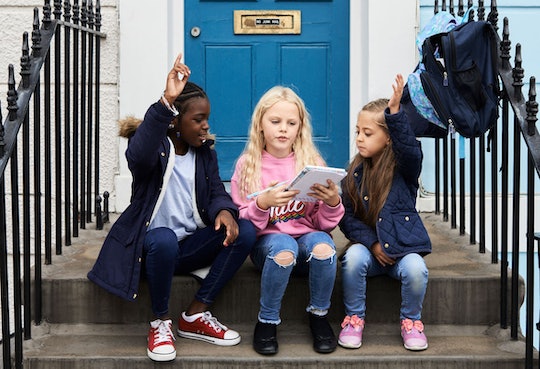 Dear Jenny: Should I Step Into My Daughter's Friendship Dramz?

My daughter is only in third grade but is already experiencing SO MUCH friendship drama. She's friendly with lots of girls in her class, which I love, and they all have their little squabbles, but one girl in particular seems to be the source of a lot of angst for the others. She seems to find everyone's weak spot and poke it; the others recognize that she's not always being kind, but they also seem to have this need to impress her and keep her happy — my daughter has actually used the word "frenemy" to describe her. And sometimes they all play happily and get along really well.

I'm friendly acquaintances with the other girls' parents but not close, and I'm in knots over both whether I should talk to them at all and, if I do, how to go about it. Any advice?

Regina George Has Nothing on This Kid

I remember third grade. I remember it really well. Megan Something or Other wasn't allowed to go to the end-of-year viewing of Starman because she didn't turn in all the forms signed by her parents proving she'd practiced her multiplication tables (I did, but I spent the entire year FORGING MY MOTHER'S SIGNATURE. IN THE THIRD GRADE). Instead of sulking or complaining, Megan brought brownies for everyone else for our class party, then watched us troop across the hall to sit on the floor in the multipurpose room, and those brownies have haunted me my entire life. SHE TOLD THE TRUTH AND WAS PUNISHED. I LIED AND WAS REWARDED.

Also, I kicked LaTanya Hess in the shin for calling me a name, and the love of my life, Jason Pocock, wrote "Jenny is a crazy air-headed maniac" on a piece of paper and threw it in the trash, but Jenny True P.I. fished that paper out of the garbage can and went straight to the teacher.

Let's look at what kids — all kids — this age are dealing with. As I'm sure you're aware, 8- and 9-year-olds are up to speed in language use and love to express their opinions. They're beginning to understand that the world is filled with shades of gray, rather than black and white. They can be moody and dramatic when things don't go their way, and, importantly, their "peer relationships begin to have new significance as an awareness of social pecking orders and hierarchies really kicks in," as Common Sense Media explains. Also, kids this age don't necessarily understand the impact they're having on other kids.

You may have gone through something similar, which could be contributing to your desire to protect your daughter from the confusion and insecurity and heartache that is third grade.

To wit, I remember this exact situation going on in the fifth and sixth grades, with a popular girl in our class making everyone feel like crap but still somehow eliciting a competition for her attention and approval. Years later, I saw this woman in a restaurant, and she ran up to me, effusing what seemed like true happiness to see me, and I had no idea how to respond. She'd made fun of me for years — I had PROOF! I'd collected NOTES SHE'D WRITTEN ABOUT ME IN JUNIOR HIGH! — but she'd also organized a truly thoughtful surprise birthday party for me in the eighth grade. So, had she been my friend or my enemy?

Kids this age also still look to their parents for help during difficult times. And the fact is, you may have gone through something similar, which could be contributing to your desire to protect your daughter from the confusion and insecurity and heartache that is third grade. Does that mean you're responsible for stepping in, or even that you should?

It doesn't. It means you're responsible for being a listening ear and source of support as your daughter deals with this situation on her own and in her own way — and it's important to note that she doesn't seem to have asked for help, although she's perfectly capable of doing so.

It's also important to note that in the case of bullying, including cyberbullying, you should always intervene. Shut that sh*t down, call the parents, and call the school(s). But how to protect your kids from passive-aggressive behavior? Fair-weather friends?

You can't. The sucky thing about being a parent is that, after a certain age, you can't make everything OK for your kid. When they're babies (and, for some of us, toddlers), you stick a boob in their mouths and everything's gravy. But when they get older and things get more complicated, we have to help from the sidelines and bang our heads against the wall when no one's looking. The only way they're going to learn how to deal with other people is if we allow them to sort things out on their own.

You can be frank and say you don't like how she treats your daughter and you'd rather she not come over.

You're in knots over whether to talk to the girl's parents, RGHNOTK. It's not the way to go here. Why? Approaching the kid's parents is unlikely to change how they parent — if that's the issue — or the circumstances of the kid's life — if that's the issue. Also, the parents may be perfectly aware of their daughter's behavior and even attempting to change it, so you piling on isn't going to help. But all this doesn't mean you can't do anything.

First, you don't have to allow this kid into your house or allow your daughter to go to hers. Your daughter may say she wants to invite her for a playdate or a party, but you can be frank and say you don't like how she treats your daughter and you'd rather she not come over. Or ask your kid, "Why do you want to have a playdate with her? Why wouldn't you rather play with someone you enjoy?"

KEEP THAT LITTLE TWIT AWAY FROM YOUR DAUGHTER, MAMA BEAR, AND ARM YOUR DAUGHTER WITH SELF-CONFIDENCE AND SELF-ESTEEM FOR THE TIMES WHEN YOU CAN'T BE THERE. YOU GOT THIS (AND SO DOES SHE).