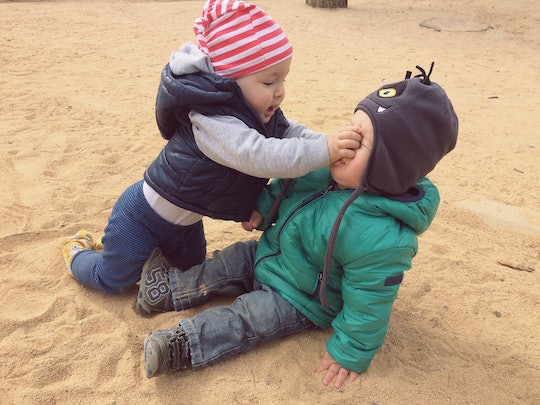 Dear Jenny: My Friend's Kid Is A Playdate-Ruiner

I recently had a playdate with my twin boys and a girl they go to preschool with. I know the mom from growing up in the same town as children, but I wouldn't say we're swapping underwear or anything close. Regardless, she and her daughters came over (age 3 and baby under 1) to play with my boys (twins are 2, and I have a newborn). Turns out, her daughter is the spawn of Satan. While at OUR house she would take all of the snacks I set out for all of the kiddos, take toys out of the boys' hands, break pieces off of toys they'd just gotten for Christmas, and throw said toys at the hardwood floor when her mom gave her the ever-so-soft, "That's not nice, sweetie." I stepped in with the "let's share" bit quite a few times, but Little Miss needed more. If she would have been a niece or a close friend's daughter, I would have felt more comfortable telling her that her behavior was not acceptable, but I certainly wasn't going to set her straight while her own mom just kept carrying on our conversation as if she didn't just throw an RC car at the wall (literally happened). I guess what I'm getting at is, how do I handle a misbehaving child during a playdate when the mother doesn't seem to find the behavior as unacceptable as I do?

We Ride At Midnight

Once, a good friend of mine gave me a bag she was done using. It was a really great bag. When I cleaned it out, I found a pair of underwear. I can only assume they were hers. They were cute. My size. Not stained. I washed them and wore them. But I never told her, and I never will, because I don't think our friendship could withstand that kind of creepiness.

So I want to know more about underwear swapping, but I am restricted to pregnancy and parenting issues.

I suspect that in calling a 3-year-old the "spawn of Satan" and "Little Miss" you're being funny (my favorite quality in another human being). I will say, because I am a Wet Blanket and have always been a Wet Blanket: Calling people names is a way to impugn their humanity WHAT JENNY I WAS ONLY MAKING A JOKE.

I know, of course, because of experience: I used to take care of a 3-year-old I didn't understand, because I was young and knew nothing about child development. I thought of this kid as a handful, thought I was modeling some kind of Christian charity or temperance by tolerating her, instead of being the truly compassionate, patient, and understanding caretaker she deserved. It wasn’t until I ran into her aunt at Whole Foods years later, called this child "high maintenance" and watched this woman's face freeze, that I understood she did not, in any way, agree with me and that this child was not defined by the quality I had projected onto her; that this woman cherished this child and respected her as the work-in-progress she was.

1. It will be hard to convince a 3-year-old not to eat the snacks that have been put out for her. If you have a set number of snacks you'd like each kid to eat, pick a time for snacks, sit the kids down with separate plates, and give them separate snacks. Then, if they reach onto someone else's plate you can tell them no, and get them more of what they want.

2. Preschoolers have issues with sharing. Known fact. No cure.

3. A toy that has pieces that can be broken off is a choking hazard for kids under 2.

4. Don't put anything breakable or that you care about in reach of a 3-year-old. To be fair, one often does not know what's breakable until it gets into the hands of a 3-year-old. But, in general, remove anything you want to remain in one piece. You're not under any obligation to let small guests ransack your house.

You do seem to understand that stepping in, especially when the other parent is right there, is tricky territory.

5. Your house is not your house. Your house belongs to the children who live in it and gallop through it 300 times a day waving markers and umbrellas and wearing leaky diapers. Let me tell you about my carpet. When I moved into my husband's house, already the carpet was 15 years old. Now, it's f*cking disgusting. It used to be this sort of cream color, which I know from looking behind the couch. Anyone with kids who wants carpet: GET BLACK. GET A BLACK CARPET. Not only is my carpet stained from large spills that never got cleaned properly, but now my 2-year-old has had a regression with potty training, and he has pooped on this carpet, and he has chosen a corner to pee in, like a dog that has been trapped in a house for too long, and he has peed in that spot (and others!) so many times OUR ENTIRE LIVING ROOM SMELLS LIKE PEE AND WE CAN'T GET IT OUT. We have put baking soda on it. We have sprayed it with Bac Out. We have SOAKED it with Bac Out. It's soaking in Bac Out right now so we can't walk in that corner because the carpet is a marsh. And still, it smells like pee. We can't pull up the carpet because, according to my husband, there's something called "pergo" under it, and we can't replace the carpet, because we don't have the money, because we have a 2-year-old in daycare.

So I'm truly sorry your hardwood floor is dented, but you should have thought about that before you had kids. Like, while you were lying on your back, post-coital, your homemade fertility chart on your bedside table in East Oakland, California, you should have thought, If this works, I am going to have to accept not having nice things for 18 years because my children will ruin my Crate and Barrel couch with their dirty feet and sh*t on my carpet.

Now: Handling other people's kids. I don't think you need to sit by when a kid is doing something that bothers you. But you do seem to understand that stepping in, especially when the other parent is right there, is tricky territory.

I guess I think of this in different terms. First, "misbehaving" can be a loaded word. The behavior you've described sounds typical for children this age. The only thing I've found that works for behavior modification is positive reinforcement and redirection. So I have some concrete advice.

1. Before your friends come over, set up the space for as few issues as possible. Remove anything breakable. Don't set snacks out. Restrict play to a room that has a floor you don't care about, or cover the floor with a rug (that you don't care about). Get a black carpet.

I recommend not saying a whole lot, or even anything at all, to risk being seen as chiding or disciplining someone else's kid.

2. When any kid starts doing something you don't want them to do — tearing toys out of another's hands, throwing things — you can step in. I'm not going to be the person who solves sharing, but I can recommend that you attempt to redirect — get the kids interested in something else, leading with your hilarious, high-energy, mesmerizing enthusiasm — and if that doesn't work, take the object in question out of circulation. As for throwing hard objects, you can definitely step in on that one. Remove the hard objects. If that doesn't work, remove all toys, and, say, sit everyone down with a huge piece of paper or a cardboard box and a lot of crayons and stickers. The way you do this is key to success, with the kid but also the other parent. I recommend not saying a whole lot, or even anything at all, to risk being seen as chiding or disciplining someone else's kid. I know I would spontaneously combust if someone tried to discipline my kid. Suggestion: Address the object as the problem, not the child: "I can see this toy isn't working right now," or, "Have you seen this enormous stuffed giraffe over here?"

You haven't mentioned hitting or kicking, but in case that happens, if the other parent isn't stepping in, you can simply say, "People aren't for hitting," or, "I'm not going to let you hit" and move the kids apart. At least you've begun an association that when a kid hits or kicks, they will be addressed immediately (meaning play will be interrupted, a kid's worst nightmare). And biting? Or any other behavior that truly harms another kid? That's a situation where you can be upfront and coordinate with the other parent — whether your kid is the one doing it, or the other kid is — and figure out a unified response so no one gets hurt. This is where you also have the right, and possibly the responsibility, to remove a kid.

PLAYDATES ARE NEVER FUN UNLESS BOTH PARENTS ARE DRINKING HIGHBALLS AND SMOKING JOINTS AND WATCHING THEIR KIDS THROW THEMSELVES OUT OF TREES. SOMETIMES NOT EVEN THEN. IT IS WITHIN YOUR RIGHT TO SET BOUNDARIES, BUT HAVE COMPASSION FOR THOSE LITTLE F*CKERS, AND FOR THE OTHER MOM, WHO JUST WANTS TO ZONE OUT FOR A SECOND AND TALK TO ANOTHER ADULT. YOU GOT THIS.