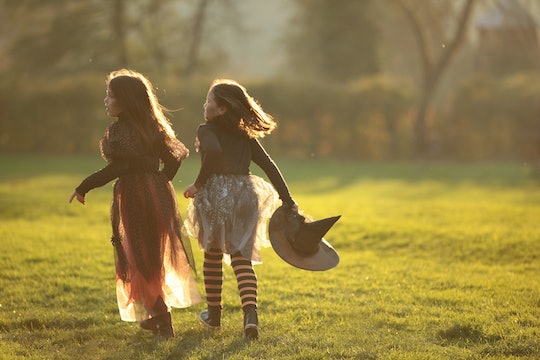 I'm Horrified By The Costume My 9-Year-Old Picked Out

My daughter wants to go to Halloween dressed as Harley Quinn from DC Comics. The outfit involves a crop top, mini shorts, fishnet tights, makeup, a choker, and high-heeled boots.

As far as I can tell, she's not aware of the sexuality of the character. I don't know whether to let her go as this person or insist she dress like a bunch of grapes or Ruth Bader Ginsburg. I don't want to draw attention to her body as a potential sexual thing if she doesn't see it herself, but I also don't think I can handle seeing my kid walking around the neighborhood as a sexpot.

One time, one year, I went to Halloween as a sexy student or some sh*t. I did it because it was easy: I had a push-up bra, lipstick, and no shame. I was in my early twenties. I have a picture of myself on the doorstep of some apartment building in San Francisco — remember when we used to walk around and end up in some stranger's bathroom and that was cool with them? — with another woman who was dressed more demurely and is now a world-famous journalist with her own podcast and guests like Seth Myers and Melinda Gates. I WAS THE ONE ON THE LEFT HOLDING A FORTY AND A CIGARETTE AND MY GREATEST ACCOMPLISHMENT THIS WEEK WAS FEEDING MY SON BARBECUE POTATO CHIPS FOR DINNER.

My best Halloween costume? Grover. I went to the Salvation Army on Valencia Street in San Francisco five minutes before Halloween, found an adult-size pajama jumper in a unique shade of blue, tied a colander onto my head and a red towel around my neck, and made a Super Grover emblem out of construction paper. Not everyone knew who I was, but the people who did were really happy to see me. Like, really happy. REMEMBER ECSTASY I DO TOO.

"Is that your maiden name?" she asked of the name I gave for myself and my son, which differed from my husband's last name.

"But it's his name?" She pointed to my seven-pound son, curled on my breast like a harbinger of an equitable future where White males improve the world instead of ruining it for everyone else.

Kids' costumes, fashions, and trends reflect the larger culture of gender stereotypes. Girls this age want to wear makeup and get their ears pierced (if they haven't already), and many do. They also still love stuffies and sometimes still engage in pretend play. They're prepubescent, which means their bodies are on the cusp of COMPLETE MAYHEM, while their minds have one foot in childhood and the other in adolescence.

The big difference between kids trying on identities in your home and outside of it is other people.

Here's the thing about kids exploring identities at this age, especially the ones they see in characters on TV and in movies: It's natural. It's how they learn to be in the world, so yes, as parents, we need to be on the lookout for what they're learning about — and valuing — in the world around them.

But the big difference between kids trying on identities in your home and outside of it is other people. When your daughter wears crop tops and makeup and fishnets in your home, she is in a safe place to experiment with her image of herself. When she leaves your home, she loses control over that experimentation being internal, and it morphs into how people react to her and how that makes her feel. And since your kid is experimenting with an adult-like identity, some people may respond to her as if she's an adult.

You can't stop the wheels of change. But you can help your daughter move toward this particular cusp, and the next, and the next, with thoughtfulness and grace (and I'm talking about you, Mommy, not her).

This is what I wouldn't do: shame her, or express any opinion about her choice. Your job is to support her in her growth, not make her feel judged or unsure about a preference she's expressed to you without shame. She's told you who she wants to be for Halloween, and if your kid is like a lot of other 9-year-olds, she's had her heart set on it for months.

Ask your daughter what she likes about this character. What speaks to her? What inspires or interests her? It's possible that in coming up with a costume together, you can accentuate the qualities you both value—the ones she already knows about and the ones you want to impart.

Or just let her wear the f*cking costume and f*ck society and your neighbors.

You also can suggest a toned-down version that forgoes the elements you've said you're concerned about. You can explain it to her this way: "You can wear whatever you want in our house. But when you go outside, you're part of the larger world, and that world has different rules."

Or just let her wear the f*cking costume and f*ck society and your neighbors. Because at least for now, you're still walking alongside her and making sure she goes to the houses with good candy. That kid in the fishnets? THAT'S MY DAUGHTER.

TEACH YOUR DAUGHTERS AND SONS THAT ANY SELF-IDENTIFIED GIRL OR WOMAN IS ALLOWED TO WEAR WHATEVER SHE WANTS AND IS NEVER CULPABLE FOR HOW ANOTHER PERSON REACTS TO HER APPEARANCE. TEACH THEM ABOUT SELF-RESPECT AND CONSENT, AND GIVE THEM AGE-APPROPRIATE BOUNDARIES TO LET THEM KNOW YOU CARE AND MAKE THEM FEEL SAFE. EVENTUALLY YOU'LL BE STEAMROLLED BY ADOLESCENCE AND YOUNG ADULTHOOD, BUT FOR NOW YOU CAN STILL PULL SOME OF THE STRINGS. ALSO YOU CAN STILL PICK OUT THE MINI SNICKERS AND REESE'S PEANUT BUTTER CUPS FROM THEIR BAGS AND THEY PROBABLY WON'T NOTICE. YOU GOT THIS.