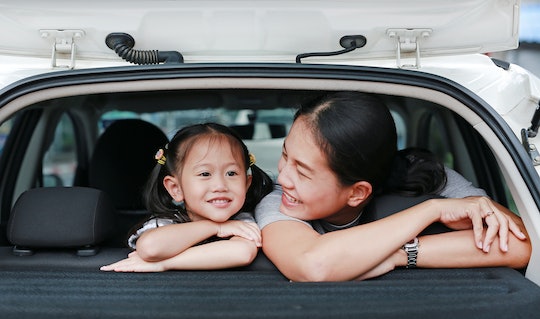 Dear Jenny: When Do You Intervene In Someone Else's Terrible Parenting Decision?

I was at a barbecue the other weekend, and my friend had a few glasses of wine (it's summer; so did I!). But then she wanted to get her kids home for bedtime, so she loaded them in the car and drove home. It made me really nervous; I know she can hold her liquor, but it hadn't been very long since her last drink. I sent her a text a little later to make sure everyone got home safely (thankfully, they did), but should I have intervened earlier? I love her dearly and don't want to risk our friendship, but this has been bothering me for days!

One of the most satisfying exclamations, directly in competition with I TOLD YOU SO, is YOU'RE DOING IT WRONG. And when you become a parent, you discover a universal truth.

EVERYONE IS DOING IT WRONG.

Below are the times I've felt grateful that someone intervened in my life and told me to make better choices:

Below are the times I've made changes in my life based on someone else telling me I should:

Below are the times I've needed someone to intervene by smacking me, as they say in my hometown, "upside the head":

HOO BOY WHERE DO I START.

Some of my best friends turned out to be drunk betches. One night, I watched my friend's 3-year-old try to climb onto my friend's lap, crying hysterically, as my friend, drunk, ignored her in favor of screaming at her husband, also drunk.

My choice, after many years, was to pull away from the friendship. And only when the mother asked me angrily why I'd pulled away did I feel I'd been given license to tell my truth: I couldn't stomach their treatment of their daughter.

"You're damaging her," I blurted out.

"You're probably right," she said.

She argued, then she agreed, and we carried on discussing our superior parenting skills.

Another story: Another friend, much closer and longstanding, has a refreshing habit of brutal honesty, perhaps because she is Eastern European. So when I walked into her backyard one afternoon and saw an uncovered, ungated fish pond, I immediately said, "You should drain that. Your daughter could drown."

She argued, then she agreed, and we carried on discussing our superior parenting skills.

Whether or not you intervene in someone else's parenting depends on a few things: how dire you feel the situation is, what kind of person you are (including your cultural background and how embedded giving child-related advice is in that culture), what your relationship with the other parent is, and what you're willing to lose.

"No parent wants her parenting decisions questioned. That's a given. But drinking and driving falls into its own separate category," says social psychologist Susan Newman, Ph.D., author of The Book of No: 365 Ways to Say It and Mean It―and Stop People-Pleasing Forever.

"We're talking about precious lives here, and that outweighs a potential — and probably temporary — rift in your friendship. You say you love her dearly — and that means you have no choice but to broach this touchy topic."

Agreed, says child safety expert Debra Holtzman, author of The Safe Baby. "It's up to other adults to plan ways to keep children out of the car with an affected driver, as children cannot refuse to get into a car or tell the driver to stop."

And don't forget, says Newman, "What's to prevent her from drinking and driving your kids under similar circumstances if you're not around?"

Here's the thing: Drunk driving is the cause of one-third of crash fatalities in the U.S., according to the CDC. And yet, adults continue to drink too much and then drive. It happens about 121 million times per year — that's over 300,000 incidents of drinking and driving a day.

The question is, in part: Is your friend ready to change, and is your intervention likely to change her?

Another story: Once, when a friend's baby was three months old, she drank too much and got into the car with him. She drove three blocks, realized her mistake, parked, got out, and walked, carrying her baby, for over an hour until she felt sober.

You might consider presenting your friend with some options — gently, humorously, privately.

One thing to consider is modeling for your child, says Newman, whether you're driving sober yourself or intervening in a friend's unsafe behavior: "Children learn acceptable behavior by observing us. When kids see adults drinking and driving, they learn that it's acceptable behavior. So when I see someone about to drive drunk, I intervene. You have to."

You might consider presenting your friend with some options — gently, humorously, privately. But after that, you have to accept that you can't control her decisions.

Option 1: Shame. DO YOU REALLY THINK YOU SHOULD BE DRIVING I WATCHED YOU DRINK THREE DRINKS IN TWO HOURS AND GIVEN YOUR APPARENT BODY WEIGHT YOU SEEM TO BE OVER THE LEGAL LIMIT GIVE ME YOUR KEYS.

Option 2: Empathize. "Are you OK to drive? I'm definitely a little tipsy, so if you wanted to wait before driving home, we could give the kids a bath here or let them fall asleep in my bed. It'll be fun!"

Option 3: Call in reinforcements. IS ANYONE ELSE AT THIS PARTY SOBER ENOUGH TO DRIVE BECAUSE JANE ISN'T AND SHE'S CONSIDERING DRIVING HER CHILDREN HOME.

Option 4: Call a cab/Lyft/Uber. "You can leave your car here tonight and get it tomorrow morning! Fun!"

Option 5: Lie. "Someone on Facebook just said there's a traffic stop between your house and mine. Do you want to wait for a bit?"

And if none of these options works to prevent your friend from drinking and driving, have an "after-the-fact conversation," says Newman. It's possible a similar situation will arise at some point, and you can refer back to this barbecue and how nervous you were about her getting home safely.

SO YOU'RE A NOSY B*TCH. SO AM I. YOU CAN'T CONTROL OTHER PEOPLE BUT IF YOU'RE LIKE ME YOU'RE GOING TO TRY. WHEN IT COMES TO CHILD SAFETY, IF YOU INTERVENE IN ANOTHER PERSON'S PARENTING, THE WORST THAT CAN HAPPEN IS YOU LOSE A FRIEND. THE BEST IS YOU SAVE A LIFE. BE BRAVE. YOU GOT THIS.