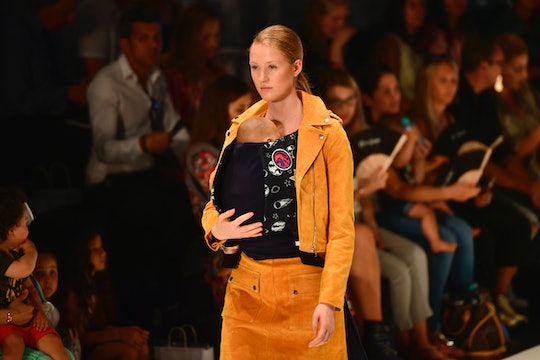 How dare she. Photo by Thomas Lohnes/Getty Images for Platform Fashion.

Dear Jenny: Can I Bring This Floppy Newborn Out In Public Yet?

When is it OK to bring a newborn out in public, like to a restaurant?

This question never occurred to me. Because from the second my son left my loins, my M.O. was YOU SHALL SEE THIS BABY.

Babies are considered newborns for the first three months. I was lucky enough to have five months of partially paid maternity leave, unlike most people in this country. SIDE NOTE: Federal law guarantees some workers BUT NOT ALL 12 weeks of unpaid leave, which to most people means GREAT GUESS I'M GOING BACK TO WORK THE DAY AFTER I HAVE THIS BABY. (Some states, like California — which now guarantees eight weeks of partially paid parental leave and is seeking to provide six months — offer more.)

For days at a time I literally did not step a foot outside my home. And I remember, at the time, not caring. I was one hundred percent fulfilled/obsessed with bouncing my baby up and down and singing "You Are My Sunshine" (which, once you sing it 100 times, you realize is a dark and foreboding dirge).

However, every once in a while, I would get inspired OK have a wave of anxiety that I wasn't filling my son's brain with art and culture, and I went to a museum.

Nowhere else on earth would a mother ask whether it's OK to bring a newborn out in public.

Here's the thing: If your kid isn't colicky (and that's a big if), the newborn phase can be the easiest for taking a kid out in public. Babies are light. Their car seats are not yet the monstrosities designed for older kids. You don't need to bring snacks unless you're formula-feeding. They don't need to be encouraged to sleep (IF THEY'RE NOT COLICKY). My son nursed right in his front carrier, and nothing made me feel more capable, full of my own power, than walking around a museum, lactating, as I perused the permanent collection.

Nowhere else on earth would a mother ask whether it's OK to bring a newborn out in public. Only in the U.S. are we encouraged, directly and indirectly, to limit our baby sharing to social media. When my friend Angie flew with her 2-and-a-half-month-old for the first time, a jackass in the security line made loud jokes about how he hoped she wasn't on his flight. HE WAS. JOKE'S ON YOU BUDDY. Some restaurants have no-baby policies. And, most cruel of all, you can't bring babies into bars (I grew up partly in Wales, and some of my fondest memories are of playing darts and arcade games with my younger brother, and eating pub food and sitting in front of a fire as the adults gazed at us regretfully and drained pint after pint of lager).

One more thing: Since you had no time or energy to expand your question, CTMBN, you may in fact be wondering if it's safe to bring your newborn into public. Of course not! It's not safe to leave your house MICROBES PARASITES OTHER KIDS WITH THEIR SNOTTY NOSES AND FINGERS and it's not safe to be in your house LEAD POISONING CHOKING HAZARDS FAKE WOOD PANELING AND FRAMED PRINTS OF MONET'S WATER LILIES. But you'll notice, at least in the U.S., that the first thing hospitals do, after two fleeting nights if you've been ripped apart at the vagina and three to four if you've been cut open at the abdomen, is wheel you to the parking lot, holding your baby so they're not liable if you drop it, and shepherd you and your floppy progeny into a CAR.

In China, babies (and mothers) are not supposed to step outside the home until the baby is five weeks old (this is to repair the mother's chi after all the blood and fluid loss of birth and to protect the baby from the bad, bad world). When my baby was three weeks old, my brother and sister-in-law visited from China, their home, and since it was my sister-in-law's first time outside that country, I thought it might be amusing for her to see an American Chinatown. Cut to us walking down a crowded street and every middle-aged Chinese woman asking us one question. Not, "Would you like me to hold that baby while you nap here on the sidewalk?" Or, "Is the numbing spray working on your labia?" No: HOW OLD IS THAT BABY SMILE SMILE BLINK BLINK.

On the one hand, this was the only in-your-face discouragement I ever got about taking my newborn out in public. But I will say this: Walking through Chinatown, where everyone interacted with me because of my new baby, felt more humanizing than being ignored or shunned (although I don't recommend being a jackass in a security line). So I just said, "Five weeks!," let people smile doubtfully, and smiled back, proud as a m*therf*ck*r.

BRING THAT BABY INTO PUBLIC WHENEVER YOU'RE READY. YOU MADE IT THROUGH PREGNANCY AND LABOR AND NOW THIS FLOPPY OTHERWORLDLY THING. GO CROW IT TO THE WORLD. YOU GOT THIS.