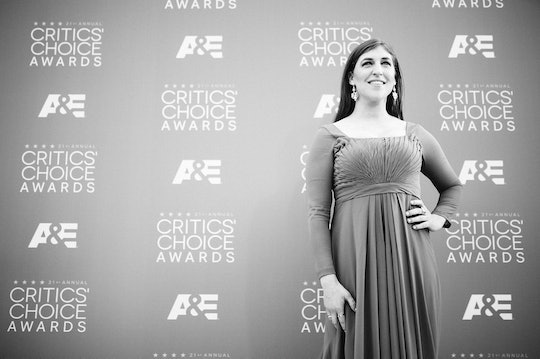 Dear Mayim: Beauty Doesn’t Invite Sexual Abuse, & "Modesty" Won’t Save You From It Either

Dear Mayim, when I was just a young kid, you were on Blossom playing a quirky character that didn't look punched from the Mickey Mouse Club mold of child star. I found you in adulthood and am ever-grateful for the complex feminist character you brought to screens in The Big Bang Theory. But I read what you wrote about Harvey Weinstein's alleged history of sexual abuse and predation in The New York Times, and it made me very sad. You wrote that: "As a proud feminist with little desire to diet, get plastic surgery or hire a personal trainer, I have almost no personal experience with men asking me to meetings in their hotel rooms." As if to explain your escaping harassment, you said, "I dress modestly. I don’t act flirtatiously with men as a policy." But I need to tell you that sexual harassment and sexual abuse aren’t a matter of personal choice. My modest choice of clothing didn't protect me from a predator as a teen. I need to show you why your argument is dangerous.

In the blistering summer of ’98, my parents hired a driving instructor for me. It took only two lessons to learn how to drive and parallel park. It took only two lessons for me to get my license and be sexually harassed by my driving instructor. There ostensibly to learn to perform geometric maneuvers with a car, I was, as you might say, “cultivating” parts of myself that may not garner “fame and fortune,” and yet I was easy prey for an older man schooled in the power structure. I was a young girl unaware of her blind spots.

I was 16 and wearing jeans and a baggy t-shirt — conservative choices, if you choose to view it that way. I had a pale face, a flat chest, and a Jewish nose, just like you, Mayim. I was anything but sexy, and interested in nothing other than passing my driving test. He was an older man who said that every time I made a mistake, I had to kiss him. If I refused his request, which I tried — and yes, I do feel like I have to clarify that — he would stop the car until I acquiesced. I was helpless. I was 16. Importantly, I wasn’t “immersing myself in a business that rewarded physical beauty and sex appeal,” though I was immersed in a world built on those values. I was just a girl on a suburban street, masked by the paneling of the car I drove. Like the alleged victims of Harvey Weinstein, I didn’t opt in to the abuse. Nor did I want to be seen as a victim.

I was ashamed I kissed him, embarrassed for myself and for my parents. “I should have told someone,” I thought later. “I should have somehow resisted.” That is how the imbalance of power plays out: by shuttling blame onto the victims, even in their own eyes. After two lessons, I told my parents I was ready for my test — it was imperative that I passed. I parallel parked like a pro. Fear is a hell of a coach. I’ve gone far; so have you.

I understand your instinct to further contextualize your words, but I cannot indulge them in any context at the expense of so many victims.

Women have been told to dress and act modestly for centuries. “Behave yourselves and you won’t get into trouble,” they are told. “Keep your legs closed.” And yet, miraculously, they are still raped. Miraculously, they are still harassed. Miraculously, they are still molested. What are the men told contemporaneously? “She clearly wants you.” “Take what is yours.” “She’s asking for it.” Even when men rape and catcall and harass, miraculously, it’s still our fault. I know that you believe claims that you engaged in victim-blaming are off-base. I saw your response to critics, in which you said, "God forbid I would blame a woman for her assault based on her clothing or behavior. Anyone who knows me and my feminism knows that's absurd and not at all what this piece was about." But I'm telling you, as your core demographic, I found your argument problematic.

One out of every 6 American women and 63,000 children a year are victims of sexual assault and abuse, according to the Rape, Abuse, & Incest National Network. Do you think they all fail to make choices that were “self-protecting and wise”? Do you believe they all make it their “policy” to “act flirtatiously with men”? Do you believe conservative dress or a rejection of “impossible beauty standards” will protect us, Mayim? I don’t think you do.

You say “we can’t be naïve about the culture we live in,” and you are right. But society won’t change if we keep putting the burden of action on women alone. Your rhetoric acknowledges that the solution falls to women only because men have the power, so you must understand that the salve isn’t endlessly retreating from the steady march of male entitlement.

And you do have power, Mayim. You have a megaphone and platform, which is why I’m asking you to use it to consider how to advocate for your fans, for victims of sexual assault and harassment, for readers who are offering up their truth to you. Trust them. Trust that this isn’t about your individual experience, which you detail in your op-ed in The Times:

I always made conservative choices as a young actress, largely informed by my first-generation American parents who were highly skeptical of this industry in general — “This business will use you up and throw you away like a snotty tissue!”— and of its men in particular: “They only want one thing.” My mom didn’t let me wear makeup or get manicures. She encouraged me to be myself in audition rooms, and I followed my mother’s strong example to not put up with anyone calling me “baby” or demanding hugs on set. I was always aware that I was out of step with the expected norm for girls and women in Hollywood.

I am a daughter of immigrants like you, and my mother, when I told her years later about my driving instructor, scorned me for staying silent, because my dad would have “killed that son-of-a-bitch.” My mother brought me up to be a feminist, and I will do the same for my children. We are alike on this count.

I know that you have held up your own brand of feminism as a defense to criticisms of your words, but feminism isn’t a defense for the men who stand idly by in this system, either. I understand your instinct to further contextualize your words, but I cannot indulge them in any context at the expense of so many victims. Your conservatism, and your own beliefs about your looks may have saved you from this type of abuse, but your beliefs did not save me.