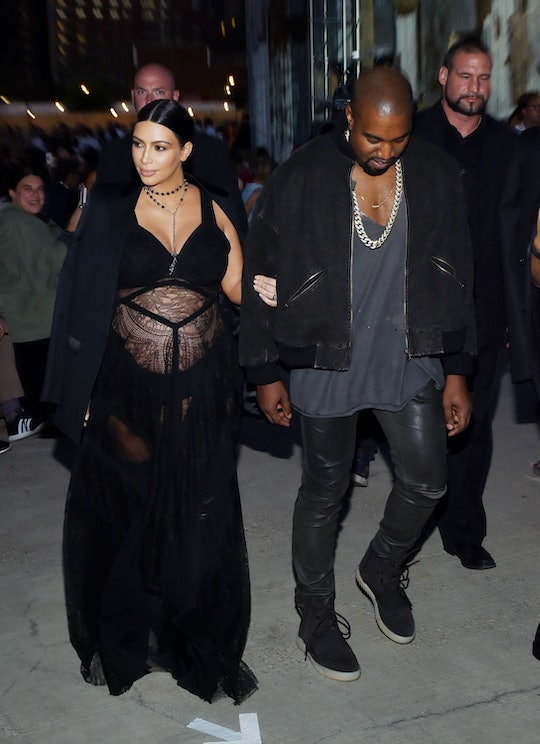 Dear Parents Of Kids Named Saint: I've Been There, & It's Going To Be OK

Dear All Parents Who Have A Kid Named Saint,

Well, this isn't exactly what you expected, is it? Kim Kardashian and Kanye West stole your baby name like shameless thieves, and now you're probably having a lot of feelings about it. And why wouldn't you? When you selected the name "Saint" for your child, you probably assumed you could count on a few things, chief among which was the fact that not very many others would name their kid Saint, which is definitely a fair thing for you to have assumed. There are so many reasons why this benefits a child, says Jessica, haver of the most common name for girls born in the 1980s, who was literally never the only Jessica in her class any year when she was a kid. Nothing makes you feel less like an individual and more like bland sheep among sheep than having to be known as Jessica B. to distinguish you from the three other Jessicas in your class of 20 kids. By naming your child Saint, there's a reasonably good chance that you have saved them from that plight. There's a reasonably good chance that, by naming them Saint, you were already empowering them with an inherent degree of distinction and uniqueness; growing up with a name like Saint will not only allow them to stand apart from the crowd — it will nearly demand it of them, a challenge which I think all kids are fundamentally capable of rising to. And having their individuality so obviously marked right from the get-go can almost assuredly only serve to make them stronger and more confident.

In short, when you named your kid Saint, you were doing them a great service, starting them off in life on a tremendously advantageous foot. Because, after all, who else would name their kid "Saint"??

So... OK. Everything is suddenly very different. Now, instead of your child having a decidedly rare name, they share a name with the child of the actual most famous family in the world. The minute Kim Kardashian and Kanye West decided to name their second child Saint, the context of your kid's identity was radically altered forever: Saint is no longer your child's name — it's Saint West's name, which your kid just happens to share. It's as dramatic a change as could possibly happen, from standing alone to standing in a very pronounced, inescapable shadow (because honestly, no matter what happens, it's safe to assume that Saint West will be famous for his entire life, more famous than any of the actual saints who have ever lived).

It's possible that, in the wake of finding out what Kim and Kanye named their son, you are having a lot of...feelings. And that's completely valid.

While most people might think it's silly for you to have an actual, real emotional response to what a celebrity is naming their baby — "Why do you care? It's not your kid; You don't even know them." — I completely understand why you probably are. I've been there. In fact, I've been there with this same famous family.

In July 2012, I gave birth to a tiny human, and gave him the middle name "North." This, to be clear, was a full year (almost) before North West, Kim and Kanye's daughter, was born. When I picked the name, I had never heard of anyone having that name, let alone the most famous kid on the planet. When Baby Girl West burst onto the scene a year later, my first response was unconcerned amusement — "Ha, that's funny, they copied me, LOL." — but that quickly changed. Because, at the time, a year seemed like a very long time between babies being born, and I unquestioningly assumed that no one would ever think that I named my baby after their baby... They were born a whole year apart! I did it first! Come on! It's a coincidence!

But then I realized the truth: Most people are not keeping a detailed calendar of when celebrity babies are born. Most people, in fact, are not even paying that much attention to when your baby was born. They are paying so little attention to these details that by the time my kid is, say, 10 years old, the age difference between him and not-so-little North West is going to be wholly imperceptible. It will be so easy and understandable to assume that I was the copycat. The fact is, when a celebrity gives their kid your kid's name even within a few years of them being born, it's only a matter of time before our weak, flawed memories start blurring those dates and making it all-too-easy for people to assume that you named your child after the high-profile kiddo who shares their name.

So, you could argue, why does this even matter? Who cares if people think you named your kid after a famous person's famous kid? To which I say, because it f*cking matters. Look, I'm not here to tell anyone how to live, but probably the last thing I personally would do in the world is intentionally name my child after a celebrity's kid. Naming your child after someone is a meaningful, significant, emotional thing — I do not think it's petty or stupid to care whether or not people think I have such profound connections with a celebrity I don't actually know in real life. That's just... not something I'm comfortable with people thinking about me. And while I'm not the type (as you're probably not either) to be overly concerned with what people think about me, I'm not exactly psyched about them thinking that the Kardashians are soooo important in my life that I would name my kid after Kim's kid. And even though my son is a year older than North West, I can assure you that I will probably always having to be clarifying that, no, my child is older and it's a total coincidence.

Which is another reason you're probably very annoyed about this whole Saint West thing: It means you're going to have the same exact conversation with a million people for the rest of time. Prepare yourself for a lot of tedious exchanges that look something like this:

*You introduce your child, Saint, to someone*

Them: Oh, Saint, like Kim and Kanye's kid! That's so funny!

You: Yeah, I didn't name him that because of them.

Them: Sure, but like, you knew that was their child's name, so...

You: Actually, my Saint was born way before that, so...

OK, I get that this isn't exactly the roughest struggle anyone has ever endured, and it's a conversation that will probably begin and end easily and quickly enough, but multiply it by the maybe actual thousands of times you'll have to have it over the course of your child's life, and it's suddenly not that small a deal.

And that, ultimately, is why you probably have a lot of feelings today: Kim and Kanye stealing your kid's name might not be life-altering to most people. It might not even be life-altering to you and your kid right now. You might not even know exactly why you feel uncomfortable about your child sharing this now-famous name with this very famous newborn, but there's actually a very clear reason for it: No one names their baby "Saint" with the hope that they will lead anything but a very unique, strong life as someone who is clearly and definitely their own individual; you don't name a kid "Saint" with the hope that they will be anything other than their own person. And now, suddenly, their name could brand them with almost the complete opposite of that: copycat and trend-follower (not to mention what qualities it might lead people to assume about you, the person who named them that).

It's entirely valid for you to feel a little disappointed or even very upset about the fact that your kid now shares a name with arguably the most famous kid on the planet. It kinda changes everything about the name, a name that was yours before today. Now it's kinda theirs and you're just... using it. It's not a great feeling.

Oh, is this the part where you're expecting me to give you some magic solution to feeling better about this, or tell you that it all goes away after a while? Sorry, I got nothin'. I mean, my little North is only three, so it's not like I've had a lifetime to come up with ways to circumvent these pitfalls of famous name-sharing, and as North West gets older, she only gets more famous, and the association between my son's name and the Kardashian/West family becomes more cemented. So I have no magic answers for you right now.

But I will say this: Having a celebrity steal your baby name, after it being frustrating and annoying and more than a little sad, ends up being a truly helpful point of perspective. Because a name, honestly, is just a name. As much as we think, when we're painstakingly selecting a name for our babies, that it means the world and that so much of who they are will be determined by what name we choose for them, the fact is, our kids are who they are. Their uniqueness is irrevocable. The confidence and boldness that we were striving to establish for them by giving them an uncommon name? You can be absolutely certain that that was only the start of the ways in which we are instilling those qualities in our kids. Who they are, and who they are in the process of becoming, has everything to do with the people they were born to be, and the people we are teaching them to be — and those are things that no one, not even the almighty Kim and Kanye, can change.